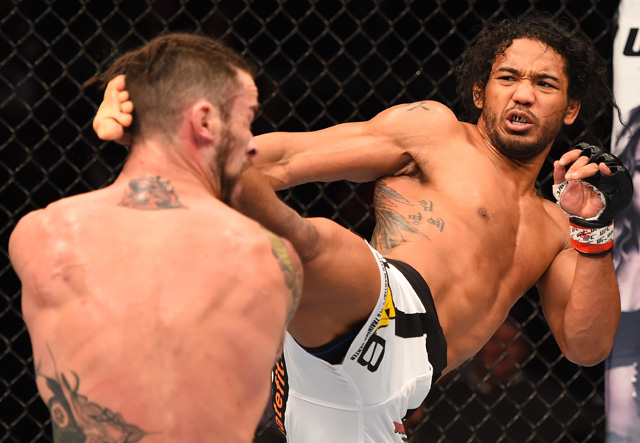 
Benson Henderson accepted the risk and opened new avenues for his career.

The former Ultimate Fighting Championship and World Extreme Cagefighting lightweight champion made a successful short-notice appearance at 170 pounds, as he submitted Brandon Thatch with a fourth-round rear-naked choke in the UFC Fight Night “Henderson vs. Thatch” main event on Saturday at the 1stBank Center in Broomfield, Colo. The end came 3:58 into round four, as Henderson snapped the first two-fight losing streak of his career in dramatic and emphatic fashion.

The man they call “Smooth” leaned on his wealth of big-fight experience against a much larger and more powerful adversary. Henderson zeroed in on the Coloradan’s legs and body, steered clear of dangerous exchanges and weathered the storm when needed, especially in the second round. Eventually, Thatch tired and grew vulnerable to takedowns. Henderson brought him to the ground twice in round four before moving to his back and sinking the fight-ending choke.

In wake of UFC Fight Night “Henderson vs. Thatch,” here are six matchups that ought to be considered:

Benson Henderson vs. Eddie Alvarez: Henderson did virtually everything right against Thatch, luring him into the later rounds before springing the choke-induced submission. While “Smooth” indicated a willingness to meet top welterweight contender Rory MacDonald in Canada, the Tristar Gym ace might prove to be too steep a hill to climb. Besides, Henderson belongs at 155 pounds, inside the division where he has enjoyed his greatest success and can find the most advantageous matchups moving forward. Alvarez was forced to withdraw from their UFC Fight Night encounter on Jan. 18, leaving Henderson to lose a controversial decision to Donald Cerrone in Boston.

Brandon Thatch vs. Erick Silva-Ben Saunders loser: Health has been an underlying concern for the gifted Thatch, who now must prove he can respond to adversity inside the cage. The 29-year-old Elevation Fight Team standout suffered his first defeat in more than six years, as he bowed to the quicker, craftier and far more polished Henderson. Thatch pressured “Smooth” with relentless forward movement for much of their encounter but ran out of steam when he needed it most. He had finished his 10 previous opponents inside one round, and his lack of actual fight time may have come back to haunt him on center stage. Silva will lock horns with Saunders at a UFC Fight Night event on March 21 in Brazil.

Neil Magny vs. Thiago Alves: Magny is making it more and more difficult for the powers that be to ignore him. “The Ultimate Fighter” Season 16 semifinalist recorded his sixth straight win by submitting Kiichi Kunimoto with a third-round rear-naked choke. Since dropping back-to-back bouts to Sergio Moraes and Seth Baczynski in 2013, Magny has carved through Kunimoto, William Macario, Alex Garcia, Rodrigo Goiana de Lima, Tim Means and Gasan Umalatov. The 27-year-old has become an intriguing player at 170 pounds, as he has shown steady improvement with each appearance. Alves made a successful return at UFC 183 on Jan. 31, when he took care of Jordan Mein with a second-round body kick.

Ray Borg vs. Zach Makovsky: The buzz behind Borg continues to build -- and with good reason. The 21-year-old prospect executed his second submission in as many outings, as he victimized Chris Kelades with a kimura from half guard 2:56 into the third round of their flyweight showdown. A deft scramble with able standup and a superb submission game, Borg now sits at 8-1 and has the look of a future title contender at 125 pounds. Makovsky, meanwhile, has already captured gold inside the Bellator MMA and Resurrection Fighting Alliance promotions. He won for the fifth time in six fights, as he pocketed a unanimous decision over Tim Elliott on the undercard.

Cole Miller vs. Dennis Siver: Miller was outgunned but held his own in the co-main event, yielding a unanimous decision to Max Holloway. The American Top Team representative fought to a relative stalemate through 10 minutes, but a pair of inadvertent head butts from Holloway in the second round exacted a toll and left him with a serious gash on his left eyebrow. Though visibly compromised and frustrated, Miller never gave in. The setback snapped his two-fight winning streak. Siver was on the receiving end of a second-round technical knockout from Conor McGregor under the UFC Fight Night marquee in January.

Tim Elliott vs. Scott Jorgensen: Three straight losses have placed Elliott’s spot on the UFC roster in peril. The 28-year-old flyweight failed to right his ship against the aforementioned Makovsky, as he surrendered six takedowns in dropping a unanimous decision to the former Bellator and Resurrection Fighting Alliance champion. The setback comes on the heels of consecutive defeats to Ali Bagautinov and Joseph Benavidez. If he keeps his job, Elliott figures to continue to draw difficult assignments within a fledgling division that has yet to flesh out its hierarchy at the middle and lower levels. Jorgensen has lost four of his past five bouts, including an arm-triangle choke-induced submission against Wilson Reis at UFC 179 in October.