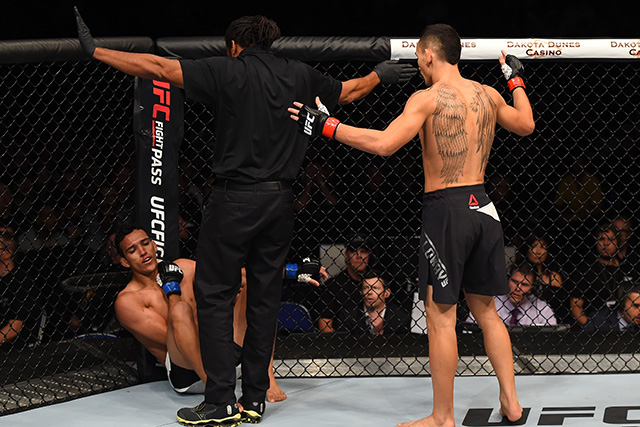 
Max Holloway now understands how victory can sometimes be more bitter than sweet.

The surging Hawaiian extended his winning streak to seven fights against Charles Oliveira in the UFC Fight Night “Holloway vs. Oliveira” headliner on Sunday at the SaskTel Centre in Saskatoon, Saskatchewan, albeit in anticlimactic fashion. It was over just 99 seconds after it began, with an injured Oliveira clutching at an area between his left shoulder and his neck. The 25-year-old Brazilian was stretchered out of the cage, the stunned crowd silenced.

Holloway punched beautifully to the body and head, and his superiority on the feet seemed to force Oliveira’s hand. “Do Bronx” abandoned the standup and shot in for a double-leg takedown, but he wound up on his back at the base of the cage. Holloway disengaged, electing not to tempt fate inside his counterpart’s venomous guard. Somewhere during the exchange, Oliveira was injured. When he rose to his feet, the pain set in and he motioned for assistance from referee Herb Dean. It marked the first time since UFC 168 in December 2013 that an Ultimate Fighting Championship main event ended because of an injury.

In wake of UFC Fight Night “Holloway vs. Oliveira,” here are six matchups that ought to be made:


Max Holloway vs. Frankie Edgar: The enthusiasm surrounding Holloway remains despite the unfulfilling outcome against Oliveira. The 23-year-old Hawaiian has not tasted defeat in more than two years, having beaten Oliveira, Cub Swanson, Cole Miller, Akira Corassani, Clay Collard, Andre Fili and Will Chope in succession. More importantly, Holloway has shown noticeable improvements with each outing, as his experience continues to blend with his talent. Edgar last appeared on the UFC Fight Night marquee on May 16, when he took a five-round unanimous decision from Team Alpha Male patriarch Uriah Faber in the Philippines. “The Answer” has rattled off four straight wins since he failed in his bid to unseat reigning featherweight champion Jose Aldo in February 2013.

Neil Magny vs. Rick Story: Three weeks after submitting to Demian Maia, Magny was back in the cage taking out his frustrations on Erick Silva. “The Ultimate Fighter” Season 16 semifinalist popped Silva with repeated jabs, did some damage with uppercuts and picked his spots with the right hand. Magny more than held his own with the Brazilian on the ground and slowly chipped away at his resolve. According to preliminary FightMetric figures, he out-landed Silva 132-37 in the total strike department. Story, whom Magny replaced on short notice because of injury, last competed at a UFC Fight Night event in October, when he claimed a five-round split decision against Gunnar Nelson.

Patrick Cote vs. Hector Lombard: When Cote was released by the UFC in late 2010 following three straight losses to Anderson Silva, Alan Belcher and Tom Lawlor, some wondered if he would ever grace the Octagon again. “The Predator” has gone 9-2 since, losing only to former Strikeforce champion Cung Le and the fast-rising Stephen Thompson. In his latest outing, Cote became the first man to stop Josh Burkman with strikes, as he put away “The Ultimate Fighter” Season to alum with punches 1:26 into round three. Lombard is currently serving a one year suspension for a positive PED test. Eligible to return in January, the former Bellator MMA champion owns a 3-2 record in the UFC.

Francisco Trinaldo vs. Jim Miller: Trinaldo has gone about his business quietly at 155 pounds and compiled a nice little resume in the process. The former Jungle Fight champion disposed of previously unbeaten “The Ultimate Fighter Nations” winner Chad Laprise with punches 2:43 into the first round, as he put his fourth straight win in the books. The finish was Trinaldo’s first since he submitted Mike Rio with an arm-triangle choke at UFC on FX 8 in May 2013. A grizzled and proven piece of the old guard in the UFC lightweight division, Miller last fought at UFC on Fox 16 in July, when he walked away with a split decision against Danny Castillo.

Olivier Aubin-Mercier vs. Michael Chiesa: A physical specimen with unquestioned tools, Aubin-Mercier has the look of a potential star at lightweight. The 26-year-old Tristar Gym prospect ran circles around Tony Sims with his takedowns and topside grappling, cruising to a third consecutive victory. Sims, a boxer by trade and a short-notice replacement for the injured Chris Wade, never managed to create the distance necessary for him to operate. Aubin-Mercier executed six of his 10 takedown attempts and often backed them up with an active submission game. Chiesa has not competed since April 4, when “The Ultimate Fighter 15” winner captured a unanimous decision from Mitch Clarke at a UFC Fight Night event.

Valerie Letourneau vs. Randa Markos: Letourneau killed some of the hype around Maryna Moroz, as she handed the Ukrainian upstart her first loss. The American Top Team rep floored Moroz with a savage right hand in the first round, navigated some adversity in the second and iced it with a strong effort in the third, where she smothered the 23-year-old from top position. Letourneau, who has never lost at 115 pounds, will carry a four-fight winning streak into her next appearance. Markos, 30, last fought at UFC 186 on April 25, when she walked away with a unanimous verdict over Aisling Daly at the Bell Centre in Montreal.