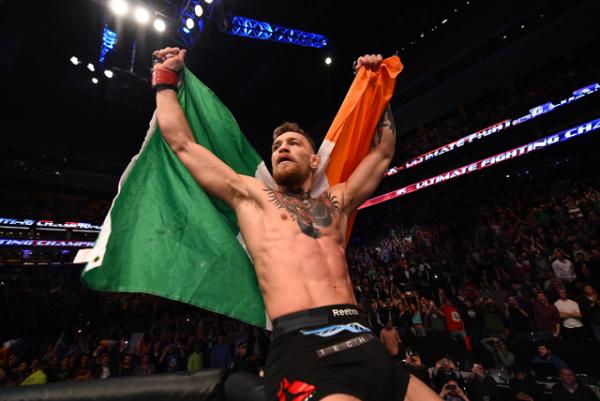 Conor McGregor will face the stiffest test of his career in Jose Aldo. | Photo: Jeff Botari/UFC/Zuffa/Getty


All the hype and hysterics mask one inconvenient truth for Conor McGregor detractors: The man is one heck of a mixed martial artist.

McGregor ripped through Dennis Siver in the UFC Fight Night “McGregor vs. Siver” main event on Sunday at TD Garden in Boston, as he staked his claim as the No. 1 contender in the Ultimate Fighting Championship featherweight division with a crowd-pleasing second-round technical knockout. Siver wilted 1:54 into round two, with the Irishman dropping elbows and punches from full mount.

Just as many had feared, the headliner was not competitive. McGregor bludgeoned his stocky counterpart with straight left hands, leaving him with substantial facial damage after the first round. In the second, he dropped Siver with another straight left, calmly climbed to mount and drove the nails in the figurative coffin. McGregor, 26, has won posted 13 consecutive victories, all but one of them finishes.

In wake of UFC Fight Night “McGregor vs. Siver,” here are six matches that ought to be considered:


Conor McGregor vs. Jose Aldo: While other contenders -- namely Frankie Edgar -- are more deserving, no one has played their cards better than McGregor. The former two-division Cage Warriors Fighting Championship titleholder has turned away all five of his opponents since arriving in the UFC in 2013, marrying his considerable physical tools with unmatched self-promotion. The ultimate answer to the substance-versus-hype debate figures to come out of McGregor’s forthcoming title bid against Aldo, the Brazilian juggernaut who has not lost in more than nine years. The UFC has tentatively targeted their five-round showdown for Memorial Day weekend in Las Vegas.

Donald Cerrone vs. Khabib Nurmagomedov: Cerrone won for the second time in two weeks, as he claimed a unanimous decision over former UFC and World Extreme Cagefighting champion Benson Henderson in the co-main event. “Cowboy,” who defeated the previously unbeaten Myles Jury at UFC 182 on Jan. 3, has thrust himself into title contention with a seven-fight winning streak. Viewed by many as the No. 1 contender at 155 pounds, Nurmagomedov has not fought since undergoing reconstructive knee surgery in July. As a result, the 22-0 Dagestani grappler was recently leapfrogged by Rafael dos Anjos -- a man he has already soundly beaten -- in the lightweight pecking order.

Benson Henderson vs. Josh Thomson: Henderson out-landed Cerrone in significant strikes, 86-57, and total strikes, 93-58, according to FightMetric figures, but he still wound up on the wrong side of a unanimous decision. The 31-year-old MMA Lab export finds himself on a two-fight losing streak for the first time as a professional, and while he has long flirted with the idea of a move to 170 pounds, there are still plenty of intriguing options left for him as a lightweight. Thomson lost a contentious split decision to Henderson at UFC on Fox 10 a little more than a year ago, the defeat costing him a shot at Anthony Pettis and the lightweight crown.

Gleison Tibau vs. Rashid Magomedov: Tibau keeps plugging along in the talent-rich lightweight division. The hulking Brazilian filled in for American Top Team stablemate Jorge Masvidal and settled for a split decision against “The Ultimate Fighter: The Smashes” winner Norman Parke. Tibau, 31, has been nothing if not consistent since entering the UFC, compiling the third-most wins (16) in the history of the promotion. While the Brazilian jiu-jitsu black belt will likely never contend for a title, he remains a viable piece of the UFC puzzle at 155 pounds. Magomedov last appeared at a UFC Fight Night event in December, when he stopped Elias Silverio on third-round punches in Brazil. The former M-1 Global champion has won 11 fights in a row.

Uriah Hall vs. Costas Philippou: Hall did what was expected of him and made quick work of Ron Stallings, stopping the game but outmatched journeyman on a gnarly first-round cut. “The Ultimate Fighter” Season 17 finalist and two-time Ring of Combat titleholder has quietly pieced together a three-fight winning streak since suffering consecutive split decision losses to Kelvin Gastelum and John Howard. Hall was originally slated to face Philippou in Boston and made it clear afterwards that he still desires a rematch with the heavy-handed Cypriot. He dropped a majority decision to Philippou under the Ring of Combat banner in February 2011.

Lorenz Larkin vs. Jordan Mein-Thiago Alves winner: The streamlined Larkin raised eyebrows in his first appearance at 170 pounds, as he dismissed the aforementioned Howard with punches 2:17 into their clash on the undercard. The TKO victory put a stop to his troubling three-fight losing streak, made secure his place on the UFC roster and provided further depth to the welterweight division. Mein and Alves will duke it out at UFC 183 on Jan. 31 in Las Vegas.