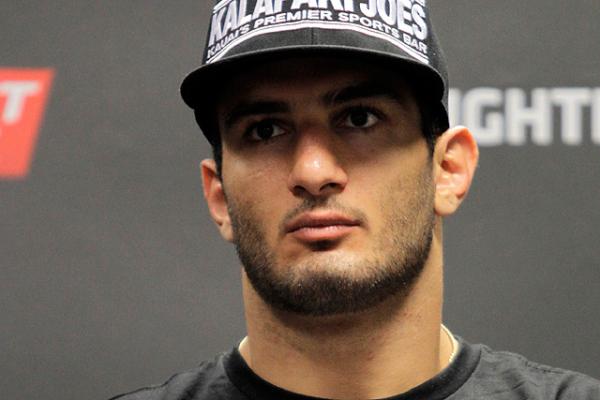 The gap between Gegard Mousasi and Mark Munoz was much wider than some thought.

The former Dream, Strikeforce and Cage Warriors Fighting Championship titleholder became the first man to submit Munoz, doing the honors with a first-round rear-naked choke in the UFC Fight Night “Munoz vs. Mousasi” headliner on Saturday at the O2 World in Berlin. Mousasi finished it 3:57 into round one of a fight that never felt competitive.

The gifted Mousasi seemed to have an answer for every move made by the Reign MMA representative. He scored with close-quarters punches and sprawled out of takedowns with surprising ease, tearing into Munoz with repeated elbows to the head. Mousasi, 28, sprinted to the stoppage by capitalizing on a failed takedown attempt from “The Filipino Wrecking Machine,” as he advanced to full mount and forced the two-time NCAA All-American wrestler to yield his back. The choke came next, followed by the surrender of a flattened-out and defenseless Munoz.

Mousasi has secured 30 of his 35 career victories by knockout, technical knockout or submission, a staggering 27 of them inside one round. The Iranian-born Dutchman has compiled a stellar 22-2-1 record in his last 25 appearances -- a run of sustained excellence that includes wins over Hector Lombard, Ronaldo Souza and Mark Hunt. Now a serious player in the Ultimate Fighting Championship’s middleweight division, Mousasi could conceivably move into title contention with another significant triumph. American Kickboxing Academy ace Luke Rockhold finds himself in a similar position and would pose a significant threat to “The Dreamcatcher,” with his unique blend of well-rounded skills and athleticism.

Munoz, meanwhile, cannot shy away from the possibility that his best days may be behind him. The likeable Californian has suffered three blowout losses in his last four appearances, making the four-fight winning streak he enjoyed between Nov. 20, 2010 and Nov. 5, 2011 feel like a distant memory. Following consecutive defeats to Mousasi and Lyoto Machida, he figures to take a substantial hit in the 185-pound pecking order. “The Ultimate Fighter” Season 11 semifinalist Brad Tavares could serve as a suitable foe on the rebound. The 26-year-old Hawaiian last fought at UFC on Fox 11 in April, when he bowed to Cuban brute Yoel Romero.

In wake of UFC Fight Night “Munoz vs. Mousasi,” here are four other matchups that ought to be considered:

C.B. Dollaway vs. Tim Kennedy: Had the judges not been asleep at the wheel at UFC 166, Dollaway would be in the midst of a five-fight winning streak. As it stands, the improving Power MMA Team representative will enter his next bout on the strength of four wins in his last five outings. Dollaway utilized a first-round striking burst, takedowns and superior topside grappling in a unanimous decision over Francis Carmont, as he staked his claim to a spot in the top 10 at 185 pounds. Kennedy recorded the most significant victory of his career in April, cruising past Michael Bisping at “The Ultimate Fighter: Nations” Finale.

Iuri Alcantara vs. Johnny Eduardo: No one is lining up to face Alcantara. The 33-year-old former Jungle Fight champion blitzed Englishman Vaughan Lee in a 25-second technical knockout, improving to 3-1 since he downshifted to the bantamweight division. A potent and polished offensive fighter, he has finished 25 of his 30 professional wins: 13 by knockout or TKO and 12 more by submission. Eduardo has pieced together a 13-1 mark since 2008 and announced his presence at 135 pounds with a rousing first-round knockout against onetime World Extreme Cagefighting champion Eddie Wineland at UFC Fight Night “Brown vs. Silva” on May 10.

Sean Strickland vs. Chris Camozzi-Bruno Santos winner: Strickland escaped his encounter with “The Ultimate Fighter” Season 17 graduate Luke Barnatt with his perfect professional record intact. The former King of the Cage champion’s commitment to tactical counterstriking swayed the judges in a controversial split decision, despite the fact that Barnatt remained the aggressor for much of the 15-minute clash. Strickland, 23, now owns a 15-0 career mark and has settled in nicely as a part of the UFC’s middleweight division. Camozzi and Santos will butt heads at UFC 175 on July 5.

Francis Carmont vs. Tim Boetsch: Carmont took another step backwards at 185 pounds, as he wound up on the wrong side of a unanimous decision against the aforementioned Dollaway. The Tristar Gym representative opened a cut over Dollaway’s eye inside the first round but managed little else in terms of meaningful offense. Carmont -- who has suffered back-to-back defeats for the first time in nearly nine years -- had no answer for the repeated takedowns and heavy top game “The Doberman” threw his way. Boetsch has followed a streak of four straight wins with losses in three of his past four appearances.