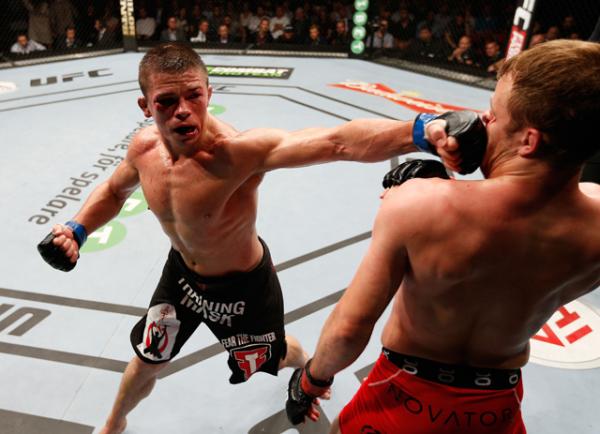 Rick Story showed Gunnar Nelson that it is not yet his time. | Photo: Josh Hedges/Zuffa/UFC/Getty


Someone forgot to tell Rick Story he was supposed to buy into the hype.

Story spent the better part of 25 minutes walking down, bullying and battering the previously unbeaten Gunnar Nelson, as he claimed a split decision over the ballyhooed Icelandic prospect in the UFC Fight Night “Nelson vs. Story” main event on Saturday at the Ericsson Globe Arena in Stockholm. Scores were 49-46 and 50-44 for Story, 48-47 for Nelson.

Rejuvenated by a recent move to the MMA Lab in Arizona, Story kept the fight where he wanted it: on the feet. He answered sneaky right hands from the light-footed Nelson with multi-punch bursts to the head and body, all while mixing in leg kicks that hampered the SBG Ireland representative’s mobility. Story almost finished it in the fourth round, where he dropped the 26-year-old with a clean left hook to the chin -- a development that all but sealed Nelson’s fate. The Renzo Gracie-trained Brazilian jiu-jitsu black belt never managed to get the fight to the ground; as a result, Nelson found himself trapped hopelessly on the feet with a bear of a welterweight.

In wake of UFC Fight Night “Nelson vs. Story,” here are six matchups that ought to be considered:

Rick Story vs. Hector Lombard-Josh Burkman winner: Story remains very much in the picture at 170 pounds. The 30-year-old Tacoma, Wash., native now has 11 victories under the Ultimate Fighting Championship banner, including a December 2010 win over reigning welterweight champion Johny Hendricks. A combination of toughness, experience and well-rounded skills make Story a difficult proposition for virtually anyone in the division. Lombard, who has won 23 of his last 25 fights, will collide with Burkman at UFC 182 on Jan. 3 in Las Vegas.

Gunnar Nelson vs. Mike Pyle: Though calls for a move to 155 pounds persist, Nelson has thus far resisted such a transition. Now, he must prove he can deal with adversity after suffering the first defeat of his 15-fight career. Nelson’s ground skills have never been in question, but his performance against Story raises real concerns moving forward about how he will handle capable wrestler-strikers in a division populated by them. Pyle last fought at a UFC Fight Night event in August, when he lasted just 72 seconds against Jordan Mein.

Max Holloway vs. Chan Sung Jung: Holloway answered the bell on short notice and capitalized, as he blasted through Akira Corassani in a little more than three minutes. A star in the making, the 22-year-old Hawaiian continues to improve. Holloway has finished each of his last four opponents -- Corassani, Clay Collard, Andre Fili and Will Chope -- since his decision loss to Conor McGregor and appears poised to hunt more substantial prey at 145 pounds. Jung, a top-10 featherweight when healthy, has not competed since his failed bid to dethrone champion Jose Aldo in August 2013.

Jan Blachowicz vs. Mauricio Rua-Jimi Manuwa winner: The 31-year-old Blachowicz brought his potent kickboxing skills to bear against Ilir Latifi in his organizational debut, stopping the brutish Swede in his tracks with a first-round liver kick. A former KSW champion in his native Poland, Blachowicz has won 15 of his past 16 bouts and could move quickly within the UFC’s thin light heavyweight division. Rua and Manuwa will duke it out in a UFC Fight Night main event on Nov. 8 in Brazil.

Dennis Siver vs. Jeremy Stephens-Charles Oliveira winner: Siver made the best of a difficult situation, as he drew upon his extensive experience in turning away promising American Top Team prospect Charles Rosa -- a short-notice replacement for Taylor Lipilus, who replaced original opponent Robert Whiteford. The Russian-born kickboxer took the pre-fight chaos in stride. In his first appearance since being suspended for a positive drug test in late 2013, Siver picked up a unanimous decision over Rosa, recording his 11th UFC victory and pocketing a $50,000 post-fight bonus in the process. Stephens will meet Oliveira at “The Ultimate Fighter 20” Finale on Dec. 12 in Las Vegas.

Akira Corassani vs. Diego Brandao: A semifinalist on Season 14 of “The Ultimate Fighter,” Corassani suffered his second stoppage loss in as many outings against the aforementioned Holloway. Outgunned by the gifted Hawaiian on the feet, he succumbed to punches 3:11 into round one; a pair of crackling right hands led to his undoing. Brandao finds himself in a similar position on the 145-pound totem pole. The talented but enigmatic 27-year-old has dropped back-to-back bouts to McGregor and Dustin Poirier.