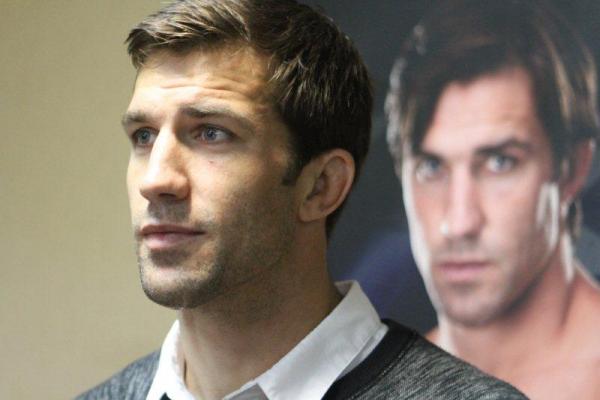 Luke Rockhold is moving up the 185-pound ladder. | File Photo

The onetime Strikeforce champion submitted Michael Bisping with a one-arm mounted guillotine choke in the second round of their UFC Fight Night main event on Friday at the Allphones Arena in Sydney. Rockhold coaxed the tapout 57 seconds into round two, as he continued to survey prime real estate in the Ultimate Fighting Championship’s middleweight division.

Clearly on the short list of future title contenders at 185 pounds, Rockhold has rattled off three straight finishes since his Octagon debut was spoiled by Vitor Belfort in May 2013. Costas Philippou, Tim Boetsch and now Bisping have all been victimized by the American Kickboxing Academy standout.

In wake of UFC Fight Night “Rockhold vs. Bisping,” here are six matchups that ought to be considered:


Luke Rockhold vs. Ronaldo Souza: They have met once previously, as Rockhold claimed a five-round unanimous decision from “Jacare” under the Strikeforce banner a little more than three years ago. Much has changed since, and the two middleweights are front and center in the UFC’s championship plans at 185 pounds. Souza has not lost since his first encounter with Rockhold, stringing together victories over Bristol Marunde, Derek Brunson, Ed Herman, Chris Camozzi, Yushin Okami, Francis Carmont and Gegard Mousasi. A Rockhold-Souza rematch would serve as an ideal title eliminator, with Chris Weidman set to defend the middleweight crown against Belfort in February.

Michael Bisping vs. Gegard Mousasi: Bisping fell short against a superior athlete and martial artist. At 35 and with 32 professional fights under his belt, his days as a top-10 middleweight are likely over, though he remains a serviceable competitor and a threat to any rising contender at 185 pounds. What comes next for “The Ultimate Fighter” Season 3 winner will be left for UFC brass to decide, but he has not recorded back-to-back wins since beating Dan Miller, Yoshihiro Akiyama, Jorge Rivera and Jason Miller in succession between May 29, 2010 and Dec. 3, 2011. Mousasi last fought in September, when he submitted to a guillotine choke from the aforementioned Souza.

Al Iaquinta vs. Rustam Khabilov-Danny Castillo winner: Long viewed as one of the premier prospects on the East Coast, Iaquinta has begun to realize his potential. The Serra-Longo Fight Team representative moved to 5-1 over his past six outings with a second-round technical knockout on Ross Pearson. Iaquinta, 27, buried the Englishman under an avalanche of clean power punches, planting smiles across the faces of his coaches, Ray Longo and former UFC welterweight champion Matt Serra. Khabilov and Castillo will square off at UFC 182 on Jan. 3.

Robert Whittaker vs. Derek Brunson-Ed Herman winner: Whittaker moved up in weight and put a pronounced speed advantage to work against Clint Hester, wiping out the Atlanta native with a second-round knee strike and follow-up punches. Talent has never been in doubt for “The Ultimate Fighter: The Smashes” winner, who has proven to be a dynamic offensive fighter since arriving in the Octagon in 2012. However, Whittaker, 23, could find the going rough against some of the larger, grappling-centric fighters at 185 pounds. Brunson and Herman will collide at UFC on Fox 13 on Dec. 13 in Phoenix.

Ross Pearson vs. Abel Trujillo-Tony Ferguson loser: Alliance MMA’s Pearson ate a counter right hand from Iaquinta in the second of their co-main event and never recovered. In full retreat mode, the wobbly Brit could not withstand the hammer strokes that fell next, as Iaquinta bulldozed him with lefts and rights along the cage. The defeat halted the momentum Pearson had picked up in his one-sided shellacking of Gray Maynard in August and marked the first time he had been stopped since Cub Swanson turned the trick more than two years ago. Nevertheless, Pearson remains one of the UFC’s most consistently entertaining lightweights. Trujillo and Ferguson will duke it out at UFC 181 on Dec. 6.

Soa Palelei vs. Todd Duffee-Anthony Hamilton winner: Few positions are more disadvantageous in MMA than being pinned underneath Palelei. The Australian brute buried American Top Team’s Walt Harris with second-round ground-and-pound in their heavyweight showcase, scoring the 22nd finish of his 26-fight career. Palelei, 36, has won four of his five fights since returning to the UFC in August 2013, losing only to Jared Rosholt. Duffee will challenge Hamilton, a former Maximum Fighting Championship titleholder, at UFC 181 in December.