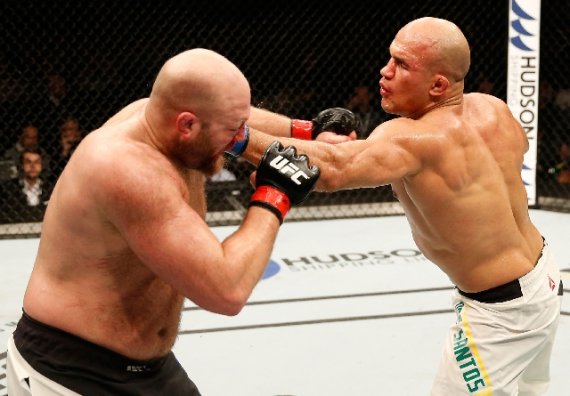 Perhaps Junior dos Santos has a little more left in the tank than some feared.

The former Ultimate Fighting Championship heavyweight titleholder ran circles around Ben Rothwell in the UFC Fight Night 86 main event, as he picked up a five-round unanimous decision on Sunday at Zagreb Arena in Zagreb, Croatia. All three judges awarded dos Santos all five rounds, giving the Brazilian a clean 50-45 sweep on the scorecards.

After a competitive first five minutes, Rothwell was a non-factor. According to FightMetric data, dos Santos outpaced him by a 2-to-1 clip in significant strikes in the second, third and fourth rounds before out-landing him by a 3-to-1 margin in the fifth. Quick hands, deft footwork and crisp punches to the head and body kept the Brazilian a step ahead of Rothwell, who entered the cage on the strength of a four-fight winning streak.

The landslide victory helped dos Santos rebound from a knockout loss to onetime Strikeforce champion Alistair Overeem in December and allowed him to put further distance between himself and the two hellacious beatings he absorbed at the hands of rival Cain Velasquez in December 2012 and October 2013.

In wake of UFC Fight Night “Rothwell vs. Dos Santos,” here are five matchups that ought to be considered:

Junior dos Santos vs. Andrei Arlovski: The lack of depth in the heavyweight division leaves dos Santos without a clear direction in which to head. The 32-year-old has put down roots at American Top Team in Coconut Creek, Florida -- a move that should aid his cause in the months ahead. However, dos Santos has alternated wins and losses in each of his last six appearances. That lack of consistency and the fact that he has already faced a majority of the top contenders in the division puts him on the outside looking in from a title-contention perspective. Arlovski will meet the aforementioned Overeem in a UFC Fight Night headliner on May 8. Win or lose, he makes for a sensible option for dos Santos.

Derrick Lewis vs. Roy Nelson: Everyone agrees that Lewis is one frightening individual. The former Legacy Fighting Championship titleholder blew away Gabriel Gonzaga in the first round of their co-main event, smashing the Brazilian unconscious with punches. “The Black Beast” has rattled off three straight finishes since his knockout loss to Shawn Jordan a little less than a year ago and continues to develop his ancillary skills. Lewis has made known his desire for a pairing opposite onetime International Fight League titleholder Roy Nelson. “Big Country” last appeared at a UFC Fight Night event on Feb. 6, when he snapped a three-fight losing streak with a unanimous decision over Jared Rosholt.

Maryna Moroz vs. Karolina Kowalkiewicz-Heather Clark winner: Moroz has seen her stock take a slight dip since her armbar finish on Joanne Calderwood in her dazzling April 2005 promotional debut. However, the Ukrainian remains an intriguing talent at 115 pounds, and her three-round unanimous decision over Cristina Stanciu kept her relevant in a fledgling division. It marked the first time Moroz, 24, had gone the distance in victory, as she rebounded from a disappointing loss to American Top Team’s Valerie Letourneau in August. The unbeaten Kowalkiewicz will square off with Clark at UFC Fight Night 87 on May 8 in Rotterdam, Netherlands.

Mairbek Taisumov vs. Dustin Poirier-Bobby Green winner: Now 5-1 since joining the UFC roster, Taisumov has the look of a contender at 155 pounds. The 27-year-old M-1 Global veteran wiped out Damir Hadzovic 3:44 into the first round of their undercard battle, chopping down the newcomer with a savage right uppercut. Taisumov has finished his last four opponents -- Hadzovic, Alan Patrick Silva Alves, Anthony Christodoulou and Marcin Bandel -- inside two rounds and appears ready to graduate to the next tier of competition in the lightweight division. Poirier and Green will lock horns at UFC 199 on June 4.

Ben Rothwell vs. Fabricio Werdum-Stipe Miocic loser: Rothwell suffered a serious setback in his march toward an unlikely title shot, as he was abused for the better part of five rounds in a unanimous decision loss to dos Santos. The defeat brought an end to his four-fight winning streak and sent the monstrous Kenosha, Wisconsin, native back to the drawing board. Rothwell, who turns 35 in October, had no answer for dos Santos’ speed, skill and technique, eating punch after punch to the body and head over the course of their 25-minute encounter. Werdum will defend his heavyweight championship against Miocic in the UFC 198 main event on May 14.