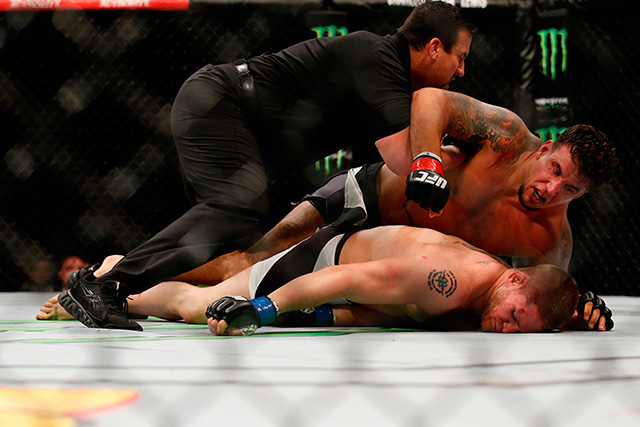 
Frank Mir played Rock’em Sock’em Robots with Todd Duffee and lived to tell about it.

Mir delivered a face-plant knockout on the hulking American Top Team export in the UFC Fight Night 71“Mir vs. Duffee” main event on Wednesday at the Valley View Casino Center in San Diego. A counter left hook wrecked Duffee 73 seconds into round one, as the 29-year-old saw his three-fight winning streak grind to a devastating halt in the center of the Octagon.

Neither man paid much attention to defensive details. Mir uncorked the cleaner punches and staggered the Evansville, Ind., native more than once during their initial exchanges. Attacking on unsteady legs, Duffee fired an ill-advised looping right in Mir’s direction a little more than a minute into the match and was met with a savage left hook. He crumpled to the canvas, facedown and unconscious, his place in the thin Ultimate Fighting Championship heavyweight division uncertain.

In wake of UFC Fight Night 71 “Mir vs. Duffee,” here are six matchups that ought to be considered:

Frank Mir vs. Ben Rothwell: Mir has authored back-to-back first-round knockouts against Duffee and former EliteXC champion Antonio Silva, putting some distance between himself and a four-fight losing streak that plagued him from May 26, 2012 to Feb. 1, 2014. The 36-year-old is now tied for fourth on the UFC’s all-time list in career victories with 16, trailing only Georges St. Pierre, Matt Hughes and Anderson Silva. Considering the barren state of the heavyweight division, Mir figures to catch meaningful bouts for the foreseeable future. Rothwell has rattled off three straight wins and last appeared at UFC Fight Night 68, where he submitted Matt Mitrione with a second-round guillotine choke on April 6.

Tony Ferguson vs. Anthony Pettis: Though he did not get the finish he desired, Ferguson was spectacular in taking apart former Strikeforce champion Josh Thomson in the co-headliner. “The Ultimate Fighter” Season 13 winner wobbled Thomson with a standing elbow in the second round and later sliced him open with two others, staining his white shorts red. Ferguson was on the offensive for the majority of their three-round encounter and outpaced him 83-33 in the significant strike department, per FightMetric. “El Cucuy” has pieced together a run of six consecutive victories against increasingly stout competition and looks like a real player at 155 pounds. The gifted but oft-injured Pettis has won five of his past six bouts but has not fought since he relinquished the UFC light heavyweight crown in a unanimous decision loss to Rafael dos Anjos on March 14.

Holly Holm vs. Liz Carmouche: Holm kept her perfect professional record intact and climbed another rung on the women’s bantamweight ladder with a unanimous verdict over Marion Reneau. The Jackson-Wink MMA standout outworked Reneau on the feet, utilized her kicks brilliantly and mixed in a third-round takedown for good measure. Considering the hype that surrounded her arrival in the UFC, Holm could now be a win or two away from title contention. Carmouche threw the brakes on a two-fight losing streak with a unanimous decision over Lauren Murphy at UFC Fight Night 63.

Kevin Lee vs. James Vick: All signs point to Lee being a star on the rise in the lightweight division. The Xtreme Couture rep posted his fourth win in a row, as he submitted James Moontasri with a first-round rear-naked choke in a 155-pound showcase that never felt competitive. Since dropping a decision to Serra-Longo Fight Team’s Al Iaquinta in his promotional debut at UFC 169, the 22-year-old Lee has toppled Moontasri, Michel Richard Cunha dos Prazeres, Jon Tuck and Jesse Ronson. The undefeated Vick last fought at UFC Fight Night 65 on May 10, when the Lloyd Irvin protégé tapped Australian prospect Jake Matthews with a first-round guillotine choke.

Alan Jouban vs. Nicolas Dalby: Jouban can bring the heat. A consummate action fighter, he weathered a first-round point deduction for an illegal knee strike to claim a unanimous decision over Matt Dwyer. The two welterweights combined to fire off 238 total strikes in their three-round battle, a successful cartwheel kick from Jouban stealing the show. The 32-year-old Resurrection Fighting Alliance graduate has recorded two straight wins since his loss to Warlley Alves in November and seems poised to make a move at 170 pounds. Dalby was successful in his organizational debut at UFC Fight Night 67 in May, as the Dane bested Elizeu Zaleski dos Santos on points and improved his record to 14-0.

Todd Duffee vs. Derrick Lewis: One can only wonder if Duffee has hit his ceiling. He threw caution to the wind against Mir and paid a heavy price, as he was victimized by a violent knockout just 1:13 into the first round. Duffee’s only two encounters with upper-tier heavyweights have not gone well, as he has lasted a mere 92 seconds combined against Mir and Alistair Overeem. Lewis finds himself in a similar position. The former Legacy Fighting Championship titleholder last appeared at UFC Fight Night 68 in June 6, when he was felled by a second-round hook kick and follow-up punches from Shawn Jordan.