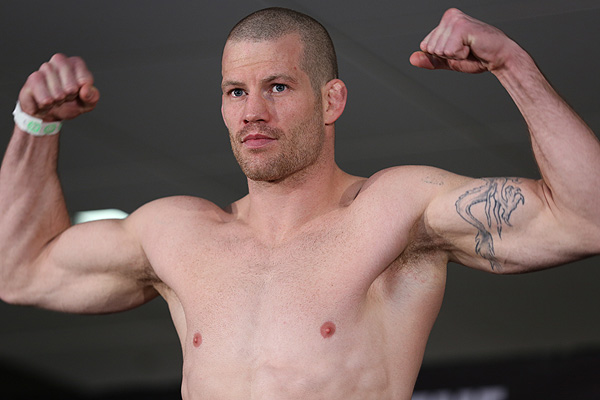 Back in the Ultimate Fighting Championship’s middleweight division for the first time in more than three years, Marquardt was in vintage form, as he submitted hard-punching Kiwi James Te Huna with a first-round armbar in the UFC Fight Night “Te Huna vs. Marquardt” main event on Saturday at Vector Arena in Auckland, New Zealand. Te Huna asked out of the match 4:34 into round one, his debut at 185 pounds spoiled in painful fashion.

Marquardt in victory halted the first three-fight losing streak of his career, reaffirmed his place on the UFC roster and perhaps provided the rest of the middleweight division with another menacing threat to consider.

In wake of UFC Fight Night “Te Huna vs. Marquardt,” here are five matchups that ought to be considered:

Nate Marquardt vs. Brad Tavares-Tim Boetsch winner: Marquardt showed off the diverse skill set that has allowed him to enjoy sustained success as a mixed martial artist, as he took care of the much-larger Te Huna. The 35-year-old pulled off his first submission since he put away Jeremy Horn with a guillotine choke at UFC 81 in February 2008. A knee strike inside the first minute set the tone for Marquardt, who later grounded, mounted and submitted his heavy-handed counterpart. A semifinalist on Season 11 of “The Ultimate Fighter,” Tavares has won five of his past six bouts and will lock horns with Boetsch at UFC Fight Night “Bader vs. St. Preux” on Aug. 16.

Jared Rosholt vs. Ruslan Magomedov: Rosholt was a three-time NCAA All-American wrestler at Oklahoma State University, and he put those skills to good use in capturing a unanimous decision over Soa Palelei. The 27-year-old Team Takedown representative grounded Palelei in all three rounds, shutting down the Australian at every turn for his seventh consecutive victory. Magomedov made a successful Octagon debut at UFC Fight Night “Munoz vs. Mousasi” in May, when he took a unanimous verdict from the previously unbeaten Viktor Pesta. Like Rosholt, the 27-year-old Dagestani heavyweight has rattled off seven straight wins, one of which came at the expense of two-time UFC champion Tim Sylvia.

Charles Oliveira vs. Nik Lentz: Full of talent and promise, Oliveira picked up the most significant victory of his career, as he submitted onetime Sengoku and Shooto champion Hatsu Hioki with a hybrid Peruvian necktie/anaconda choke. The 30-year-old Hioki had never before been submitted. Oliveira has responded to consecutive losses against Cub Swanson and Frankie Edgar with back-to-back wins and, at 24, has the look of a future player in the 145-pound division. “Do Bronx” has unfinished business with Lentz. Their UFC Live 4 clash in June 2011 resulted in a no-contest after Oliveira struck the American Top Team export with an inadvertent illegal knee.

Robert Whittaker vs. Neil Magny: Whittaker threw the brakes on a two-fight losing streak with a unanimous verdict over Roufusport’s Mike Rhodes. “The Ultimate Fighter: The Smashes” winner controlled much of the 15-minute encounter with accurate punches and kicks, as he improved to 3-2 inside the Octagon. “The Reaper” put the finishing touches on the triumph in round three, where he executed a well-disguised takedown and bloodied Rhodes’ nose with ground-and-pound. Whittaker, 23, figures to remain a significant piece of the UFC’s plans in Oceania moving forward. Magny, meanwhile, survived a scare to stop Brazilian grappler Rodrigo Goiana de Lima with second-round punches. “The Ultimate Fighter” Season 16 semifinalist has quietly pieced together a three-fight winning streak inside the UFC’s welterweight division.

Hatsu Hioki vs. Manny Gamburyan: Hioki’s disappointing run in the UFC reached a new low against the aforementioned Oliveira, as the Japanese star tapped to a spectacular choke from the Macaco Gold Team standout in the second round. He has now lost four times in his last five appearances -- a far cry from when Hioki entered the UFC as the world’s No. 2 featherweight in the minds of some and proceeded to post wins over George Roop and Bart Palaszewski. Gamburyan finds himself in a similar position, with four losses and a no-contest in his past seven outings. “The Ultimate Fighter” Season 5 finalist and onetime World Extreme Cagefighting title challenger last competed at UFC Fight Night “Brown vs. Silva” in May, when he dropped a unanimous decision to Lentz.