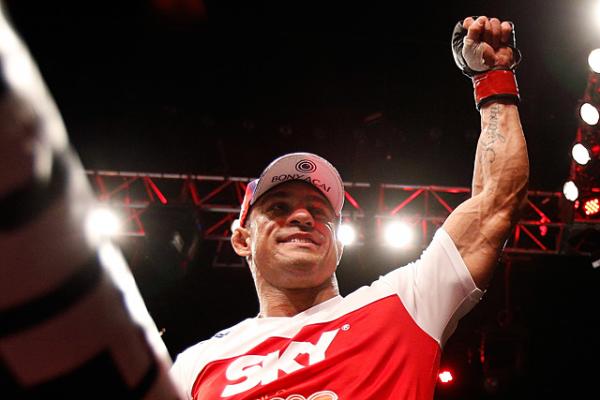 Vitor Belfort cut down Michael Bisping with a left head kick and polished off “The Ultimate Fighter” Season 3 winner with a volley of hammerfists 1:27 into the second round of their UFC on FX 7 main event on Saturday at the raucous Ibirapuera Arena in Sao Paulo, Brazil. The loss denies Bisping the golden opportunity promised him had he beaten Belfort: a crack at Ultimate Fighting Championship middleweight titleholder Anderson Silva.

Bisping stuck “The Phenom” with jabs and leg kicks in the first round, but the Brazilian’s firepower -- which has been evident since he debuted in the Octagon as a teen-ager more than a decade ago -- was too much for him to withstand. The 33-year-old Brit now faces the prospect of climbing back up the ladder in a division soon to be strengthened by the arrivals of Strikeforce imports Ronaldo “Jacare” Souza, Tim Kennedy, Lorenz Larkin and others.

Meanwhile, Belfort re-established himself as a relevant middleweight in the UFC following his unsuccessful sojourn to 205 pounds. The 35-year-old has rattled off eight wins in his past 10 bouts, losing only to Silva and light heavyweight champion Jon Jones in that span.

Belfort would serve as quite the welcome for former Strikeforce middleweight titleholder Luke Rockhold, one of the sport’s most promising young fighters. The 28-year-old American Kickboxing Academy ace will enter his Octagon debut on a nine-fight winning streak, including victories over Souza, Kennedy and UFC veteran Keith Jardine.

In the wake of UFC on FX 7 “Belfort vs. Bisping,” here are six other matchups that ought to be made:

Michael Bisping vs. Yushin Okami-Hector Lombard loser: Bisping may someday look back at this as the one that got away. On the doorstep to a title shot and a significant payday, the Brit came up short in a second-round technical knockout loss to Belfort. Still, Bisping figures to remain a significant part of the UFC’s middleweight plans for the time being. Okami and Lombard will do battle at UFC on Fuel TV 8 on March 3 in Japan, and the latter has made his dislike for Bisping known. 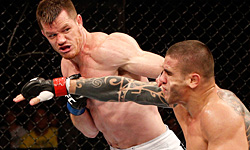 Josh Hedges/Zuffa LLC/UFC/Getty
Dollaway is 7-4 in the UFC.
C.B. Dollaway vs. Derek Brunson: In a performance that can best be described as commendable, Dollaway eked out a split decision against “The Ultimate Fighter: Brazil” Season 1 alum Daniel Sarafian. An encounter with the stocky Brazilian’s stout right hand nearly resulted in an early exit for Dollaway, but the former Arizona State University wrestler dug in and slowly turned the tide in his favor. Brunson compiled a 3-1 record in Strikeforce before he made a nice splash in his first Octagon appearance, capturing a unanimous decision from Chris Leben at UFC 155 in December.

Gabriel Gonzaga vs. Mike Russow-Shawn Jordan winner: Gonzaga’s physical talents are undeniable, as is his notoriously suspect gas tank. Both were on display at UFC on FX 7, as he grew visibly fatigued but still managed to submit Ben Rothwell with a second-round guillotine choke. The 33-year-old Brazilian, who fought hall of famer Randy Couture for the UFC heavyweight championship in 2007, has finished his last three opponents with chokes. Russow and Jordan will lock horns at UFC on Fox 6 this Saturday at the United Center in Chicago. The 36-year-old Russow is 11-1 in his last 12 outings.

Khabib Nurmagomedov vs. Ross Pearson: Undefeated in 19 professional bouts, Nurmagomedov delivered his 10th first-round finish with his violent technical knockout against Thiago Tavares. The 24-year-old Russian blasted Tavares with a leaping uppercut and dispatched him with a series of savage elbow strikes on the ground. Nurmagomedov has the look of a future star at 155 pounds. Pearson, who won Season 9 of “The Ultimate Fighter,” returned to the lightweight division in December, when he stopped Australian submission specialist George Sotiropoulos on third-round punches at UFC on FX 6.

Nik Lentz vs. Clay Guida-Hatsu Hioki winner: Lentz’s transition to 145 pounds has been nothing shy of astonishing. The American Top Team representative dominated the world-ranked Diego Nunes with takedowns, ground-and-pound and superior topside grappling en route to a lopsided unanimous decision and perhaps a Top 10 ranking of his own. Lentz, who wrestled collegiately at the University of Minnesota, has won each of his first two featherweight fights in overwhelming fashion and could move quickly in a division without a defined hierarchy. Guida, a former lightweight like Lentz, will downshift to 145 pounds to battle the gifted but enigmatic Hioki at UFC on Fox 6 this Saturday in Chicago.

Edson Barboza vs. T.J. Grant-Matt Wiman winner: Barboza answered the questions regarding how he would handle adversity, as he bounced back from his upset loss to Jamie Varner in May to strike the previously unbeaten Lucas Martin into submission. Few can match the 26-year-old Barboza’s tools, but the Brazilian will need to be more consistent in order to make serious headway at 155 pounds. Grant and Wiman await one another at UFC on Fox 6.