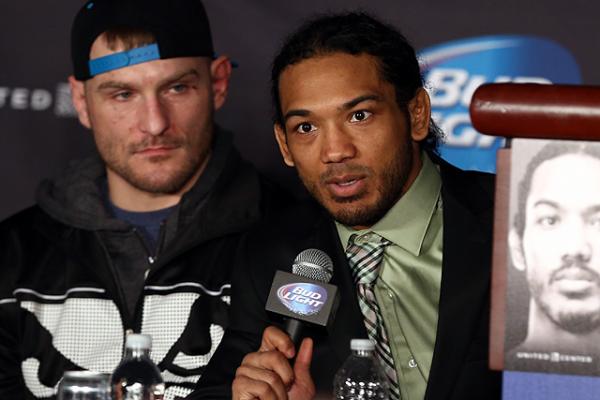 
Benson Henderson may have carried the scorecards, but he appears to have lost his latest battle in the court of public opinion.

Henderson eked out a controversial split decision over former Strikeforce champion Josh Thomson in the UFC on Fox 10 main event on Saturday at the United Center in Chicago, the verdict eliciting boos from those in attendance and resulting in widespread outrage across the MMA community. Judges Sal D’Amato (49-46) and Brian Puccillo (48-47) sided with Henderson, while Gabriel Sabaitas (48-47) gave the nod to Thomson.

Thomson -- who suffered a hand injury sometime in the first two rounds -- delivered four takedowns in the five-round bout, transitioning to Henderson’s back on more than one occasion. However, according to preliminary FightMetric figures, “Smooth” out-landed Thomson in both significant and total strikes in every round but the first. He also secured four takedowns and attempted a standing arm-triangle choke in round one. Henderson did his best work in the third frame, where he took down Thomson twice and outperformed him by a 30-2 margin in the total strikes department.

Statistical data notwithstanding, most observers had Thomson ahead on the cards. The controversial defeat could not have come at a more inopportune time for “The Punk,” who was originally scheduled to challenge Anthony Pettis for the Ultimate Fighting Championship lightweight crown. Their fight fell through when Pettis withdrew and underwent knee surgery, leading Thomson, 35, to accept the showdown with Henderson instead.

A convincing win over Thomson may have landed Henderson his desired rematch with Pettis. However, his latest performance, while successful, does not figure to inspire those who call the shots at UFC headquarters. With Pettis on the mend and the idea of a champion-versus-champion matchup with featherweight boss Jose Aldo still very much a possibility, the timing may be right for a high-stakes title eliminator between Henderson and Gilbert Melendez.

Melendez last fought at UFC 166 in October, when he captured a unanimous decision over Diego Sanchez in a memorable 15-minute romp at the Toyota Center in Houston. Like Thomson, “El Nino” knows the sting of a controversial decision defeat to Henderson, as he lost in similar fashion at UFC on Fox 7. That past history adds intrigue to a potential Henderson-Melendez rematch.

Where Thomson heads next depends largely on the health of his hand. Hypothetical matchups with Evan Dunham or Gleison Tibau make sense under the losers-face-losers matchmaking philosophy to which the UFC often adheres. However, considering the close and controversial nature of his loss, perhaps Thomson would be better suited for a pairing with someone like Jim Miller. The AMA Fight Club mainstay was in prime form at UFC 168 in December, when he submitted Fabricio Camoes with a first-round armbar.

In wake of UFC on Fox 10 “Henderson vs. Thomson,” here are five other matches that ought to be made:

Stipe Miocic vs. Alistair Overeem-Frank Mir winner: Miocic put more distance between himself and his September 2012 loss to Stefan Struve, as he cruised to a unanimous decision over Gabriel Gonzaga in the co-main event. The 31-year-old Strong Style Fight Team representative overwhelmed the resurgent Gonzaga with pace, conditioning and superior standup, planting his flag as a top 10 heavyweight with his fifth win in six UFC appearances. Overeem and Mir will lock horns at UFC 169 on Feb. 1 in New Jersey.

Donald Cerrone vs. Edson Barboza: Cerrone added to his personal highlight reel with a spectacular head kick knockout against former Jungle Fight champion Adriano Martins. The Jackson’s Mixed Martial Arts export earned a $50,000 bonus for “Knockout of the Night” after he felled Martins with shin-to-neck contact 4:40 into round one. Cerrone now owns a 9-3 mark in the UFC. Barboza finds himself on a three-fight winning streak after he took a majority decision from Team Alpha Male’s Danny Castillo at UFC on Fox 9 in December.

Jeremy Stephens vs. Dustin Poirier: Alliance MMA’s Stephens has emerged as a serious player at 145 pounds. The 27-year-old improved to 3-0 as a featherweight with a unanimous decision over Darren Elkins -- a victory that could vault him to a top-10 ranking. Stephens battered Elkins with heavy power punches and denied all nine of his takedown attempts. Poirier won for the seventh time in his past nine fights at UFC 168 in December, when he wiped out “The Ultimate Fighter” Season 14 winner Diego Brandao with first-round punches at the MGM Grand Garden Arena in Las Vegas.

Gabriel Gonzaga vs. Roy Nelson: Gonzaga enjoyed early success against the aforementioned Miocic, particularly with leg kicks, but he faded down the stretch and wound up on the wrong side of a unanimous decision. Conditioning has always been an issue for the onetime title contender, and he will need to address it if he wants to join the ranks of the elite in the heavyweight division. Nelson has faced similar criticisms throughout his career. “Big Country” will enter his next Octagon appearance having lost back-to-back bouts to Miocic and Daniel Cormier.

Eddie Wineland vs. T.J. Dillashaw: Wineland remains one of the pound-for-pound hardest hitters in MMA. The former World Extreme Cagefighting champion turned away Yves Jabouin with a searing right hand and follow-up ground-and-pound in the second round, as he bounced back from his failed bid to unseat bantamweight titleholder Renan Barao. Dillashaw, who has won five of his past six fights, looks like a future title contender. The 27-year-old Team Alpha Male export last appeared at UFC Fight Night 35 on Jan. 15, when he recorded a unanimous decision against Mike Easton.