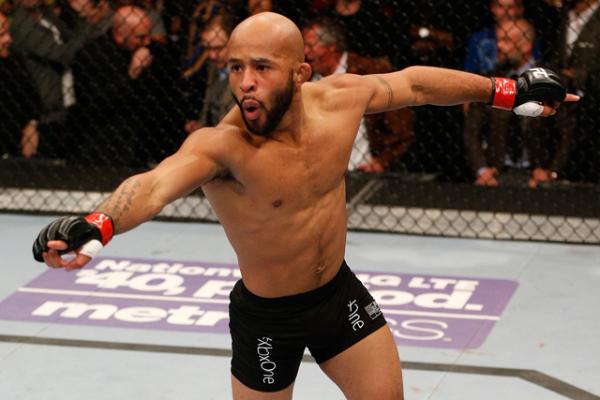 
Demetrious Johnson seems to be answering his doubters, one fight at a time. First, they questioned his desire to finish, so he gave them a fifth-round armbar-induced submission against John Moraga. Next, they questioned his punching power, so he brought it into the cage for his rematch with Joseph Benavidez.

Johnson knocked out the Team Alpha Male standout with a ringing right hook and follow-up punches to retain his Ultimate Fighting Championship flyweight crown in the UFC on Fox 9 main event on Saturday at the Sleep Train Arena in Sacramento, Calif. Denied UFC gold for a second time, Benavidez lay unconscious 2:08 into round one, a triumphant Johnson spinning through the air in celebration nearby.

The man they call “Mighty Mouse” has made himself a leading contender for “Fighter of the Year” honors, having delivered successive victories over Benavidez, Moraga and “The Ultimate Fighter” Season 14 winner John Dodson during the past 12 months. None were more impressive than his win against Benavidez, who had never before been submitted or knocked out. Johnson measured his challenger throughout their brief encounter. He moved forward, backed Benavidez into the cage and let loose with a right hook. The 29-year-old San Antonio native dropped where he stood, and Johnson made certain he was done with a series of savage rapid-fire right hands.

With Benavidez out of the picture for the time being, attention turns to the next wave of potential suitors for Johnson. Brad Pickett -- one of only two men to defeat “Mighty Mouse” -- will downshift to 125 pounds to meet Ian McCall at UFC Fight Night 37 on March 8. With Dodson recovering from injury and fighters like Ali Bagautinov and John Lineker not yet ready for primetime, the Pickett-McCall winner figures to move to the front of the line of flyweight contenders.

Benavidez finds himself in an unfortunate situation similar to that of heavyweight Junior dos Santos, the clear No. 2 in a division where he has twice failed to unseat the champion. His climb back to contention could prove long and arduous, as he attempts to navigate a fledgling but rapidly improving weight class. Tim Elliott last appeared at UFC 167, where he dropped a unanimous decision to Bagautinov, and would provide a stern test for Benavidez on the rebound.

In the wake of UFC on Fox 9, here are six other matchups that ought to be made:

Urijah Faber vs. Dominick Cruz-Renan Barao winner: Faber was utterly spectacular against prized prospect Michael McDonald, as he submitted the 22-year-old with a second-round guillotine choke. “The California Kid” capitalized on McDonald’s inexperience, routinely beating him to the punch with right hands. One such exchange led to the fight-ending choke in round two. On a four-fight tear, Faber has put himself in position to vie for bantamweight gold against the winner of the forthcoming UFC 169 unification bout between Dominick Cruz and Renan Barao.

Chad Mendes vs. Jose Aldo-Ricardo Lamas winner: Reportedly battling through an illness, Mendes did enough to earn a unanimous decision over American Top Team’s Nik Lentz. His fifth consecutive victory, while it did little to inspire the masses, kept alive Mendes’ hope of a return bout with Aldo -- the man who handed him his first and only defeat in January 2012. The Brazilian dynamo will defend his featherweight championship against Ricardo Lamas at UFC 169 on Feb. 1 in Newark, N.J.

Michael McDonald vs. Iuri Alcantara: McDonald, 22, took a step back in his development, albeit a small one, in his second-round submission loss to Faber. The gifted Californian was kept on his heels by Faber’s diverse arsenal, which was spearheaded by a series of powerful right hands. Barring injury, McDonald will likely remain a fixture in the upper reaches of the bantamweight division for the better part of the next decade. Alcantara, on the verge of a top-10 ranking at 135 pounds, knows the sting of “The California Kid” all too well. He dropped a unanimous decision to Faber at UFC Fight Night 26 in August.

Joe Lauzon vs. Diego Sanchez-Myles Jury winner: One of the UFC’s most consistent entertainers, Lauzon picked up a much-needed victory over “The Ultimate Fighter” Season 6 winner Mac Danzig. He struck for takedowns and advanced to full mount in all three rounds, mauling Danzig with elbows from top position en route to a unanimous verdict. The win halted the first two-fight losing streak of Lauzon’s professional career. Sanchez will lock horns with the unbeaten Jury at UFC 171 in March.

Edson Barboza vs. Donald Cerrone-Adriano Martins winner: Barboza captured a hard-fought majority decision over Team Alpha Male veteran Danny Castillo, surviving a first-round barrage that nearly resulted in his being finished. The former Ring of Combat champion turned to his leg kicks, slowly shifting the momentum to his side. Barboza, 27, will carry a three-fight winning streak into his next outing. Cerrone and Martins are scheduled to battle at UFC on Fox 10 in January.