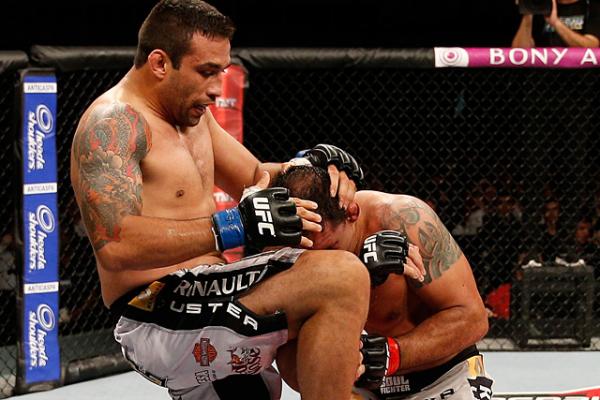 
Someday Fabricio Werdum can tell his grandkids he submitted both Fedor Emelianenko and Antonio Rodrigo Nogueira.

Werdum -- two years, 11 months and 13 days after he sprang his historic upset on Emelianenko -- forced a verbal submission from Nogueira with a second-round armbar in the UFC on Fuel TV 10 main event on Saturday at the Paulo Sarasate Gymnasium in Fortaleza, Brazil. “Minotauro” reluctantly admitted surrender 2:41 into round two, requesting intervention from referee Mario Yamasaki.

The win, Werdum’s third straight since he rejoined the Ultimate Fighting Championship roster, gives the two-time Abu Dhabi Combat Club Submission Wrestling World Championships gold medalist a legitimate claim to the No. 1 contender suite in the heavyweight division. With that said, Werdum may find himself stuck in line behind former champion Junior dos Santos, who knocked out 2001 World Grand Prix winner Mark Hunt with a sensational spinning hook kick at UFC 160 on May 25. “Cigano” also has an October 2008 knockout victory over Werdum in the bank.

Should dos Santos indeed be the choice to face reigning heavyweight boss Cain Velasquez, Werdum will have two choices: look elsewhere for a fight to pick or risk a lengthy layoff awaiting the Velasquez-dos Santos victor. Josh Barnett will challenge Frank Mir at UFC 164 in Milwaukee, and the winner of their Aug. 31 scrap would serve as an intriguing foil for Werdum, should he elect to go the latter route.

Meanwhile, one has to wonder what comes next for Nogueira. Now 37, he has put an extreme amount of mixed martial arts mileage on his body. Despite the reverence and respect Nogueira commands, he has not recorded back-to-back wins in more than five years. If Nogueira moves forward with his career, a match with the 7-foot Stefan Struve could prove meaningful and marketable for all involved. While “The Skyscraper” has not fought since he suffered a broken jaw courtesy of a Hunt savage left hook at UFC on Fuel TV 8 on March 3, the Dutchman remains one of the UFC’s more compelling heavyweight talents.

In the wake of UFC on Fuel TV 10, here are five other matchups that ought to be made:

Thiago Silva vs. Ryan Bader: Silva smashed former Strikeforce champion Rafael “Feijao” Cavalcante, as he pinned the Team Nogueira representative to the cage, leveled him with a right uppercut to the nose and finished him with follow-up blows. A bit of a wildcard in the light heavyweight division, Silva has already had two victories reversed -- one by the Nevada Athletic Commission and another by the UFC. Still, the 30-year-old’s talents are undeniable. Bader, who won Season 8 of “The Ultimate Fighter,” was booked to meet Glover Teixeira, but withdrew with an injury.

Erick Silva vs. Mike Pyle: Silva took out some of his frustration over an October defeat to Jon Fitch on Jason High. The former Jungle Fight champion submitted High with a triangle armbar 71 seconds into their welterweight affair and looks to be a serious player in the division long ruled by Georges St. Pierre. The cagy Pyle has rattled off four straight wins, his latest conquest coming in the form of a split decision over Brave Legion brute Rick Story at UFC 160.

Raphael Assuncao vs. Michael McDonald-Brad Pickett winner: Assuncao has taken to his new surroundings. A perfect 4-0 since downshifting to 135 pounds, the 30-year-old Brazilian jiu-jitsu black belt made further headway on the bantamweight ladder with his second-round, armbar-induced submission of Englishman Vaughan Lee. McDonald, who has already fought for 135-pound gold, and American Top Team’s Pickett will take aim at one another at UFC on Fox Sports 1 “Sonnen vs. Shogun” on Aug. 17 in Boston.

Rafael Cavalcante vs. Ryan Jimmo-Igor Pokrajac loser: Perhaps no fighter’s stock fell further at UFC on Fuel TV 10 than Cavalcante’s. The former Strikeforce champion faded late in the first round of his encounter with Thiago Silva, as he succumbed to punches from his fellow Brazilian 4:29 after their bout began. The performance, when coupled with his 2012 suspension over a positive test for performance-enhancing drugs, raises real questions about Cavalcante’s commitment to his craft and his long-term viability in the UFC. Jimmo, a former Maximum Fighting Championship titleholder, and Pokrajac, a Mirko Filipovic protégé, will lock horns at UFC 161 on June 15 in Canada.

Rony Mariano Bezerra vs. Diego Brandao-Daniel Pineda winner: Bezerra was stellar in dismissing the previously unbeaten Mike Wilkinson, as “The Ultimate Fighter: Brazil” Season 1 winner choked the Englishman unconscious with a triangle a little less than 90 seconds into their featherweight clash. The 29-year-old Team Nogueira export has won eight fights in a row, finishing six of them inside one round. Brandao and Pineda will test their skills against one another in August.