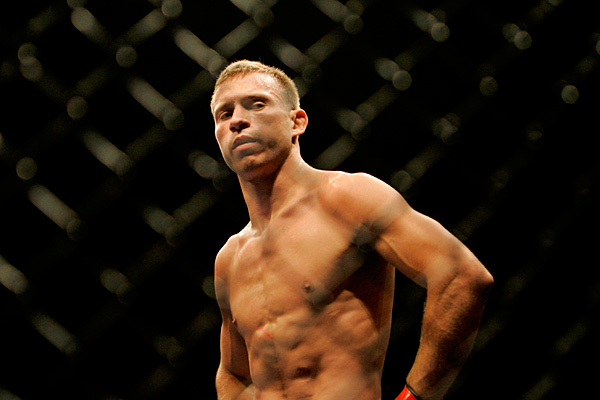 Jung morphed from mid-level curiosity to legitimate title contender in scoring a rousing technical submission victory over Dustin Poirier in the UFC on Fuel TV 3 main event on Tuesday at the Patriot Center in Fairfax, Va. Poirier, who walked into the cage as the favorite, lost consciousness 67 seconds into round four. He was beaten for the first time as a featherweight, finished for the first time as a professional.

Aldo has looked like an untouchable since he ascended to the top of the 145-pound division in November 2009, with wins over Urijah Faber, Manny Gamburyan, Mark Hominick, Kenny Florian and Chad Mendes. One of the sport’s most dynamic offensive fighters, the 25-year-old champion will enter his title defense against Erik Koch at UFC 149 on a 14-fight winning streak. Should he retain his crown, Aldo could find himself staring down the barrel of Jung’s gun.

The South Korean streamlined his game following disappointing defeats to Leonard Garcia and George Roop under the World Extreme Cagefighting banner. Three consecutive victories, all of them finishes, have followed. Jung’s stock reached an all-time high in his memorable encounter with Poirier, and UFC officials figure to strike while the iron remains hot. The clamor for an Aldo-Jung showdown only figures to intensify.

In wake of UFC on Fuel TV 3 “Korean Zombie vs. Poirier,” here are four other matches we want to see made:

Dustin Poirier File Photo
Poirier was mauled by a Zombie.
Dustin Poirier vs. Hatsu Hioki-Ricardo Lamas loser: Falling short to “The Korean Zombie” will benefit Poirier in the long run. It exposed serious holes in his game -- both standing and on the ground -- that he will need to remedy if he wants to reach his full potential. Still only 23, Poirier does not figure to fall far on the 145-pound ladder. His physical skills are undeniable, and he showcased a tremendous fighting spirit in bowing to Jung. Hioki, believed to be on a short list of challengers for Aldo, will meet the underrated Lamas at UFC on FX 4 on June 22 in Atlantic City, N.J. The loser belongs in the cage with Poirier.

Donald Cerrone vs. Gray Maynard-Clay Guida winner: Cerrone bounced back beautifully from his UFC 141 defeat to Nate Diaz. The Jackson’s Mixed Martial Arts standout battered Jeremy Stephens with a wide array of kicks, punches, knees and elbows, as he captured a unanimous decision and righted his ship. In the heart of his competitive prime, the 29-year-old Cerrone figures to hover near the top of the lightweight division for the time being, provided he remains healthy and committed. Maynard, who has already fought for the 155-pound championship twice, will lock horns with Guida in the UFC on FX 4 main event next month. A date with Cerrone makes perfect sense for the winner.

Amir Sadollah vs. Josh Neer-Mike Pyle winner: Sadollah did not wow anyone with his performance against Jorge Lopez, as “The Ultimate Fighter” Season 7 winner spent much of the co-main event locked hopelessly in the clinch -- an area in which he normally thrives. Sadollah mounted little in terms of meaningful offense, outside of sporadic front kicks and occasional close-quarters elbows, but nevertheless secured a split decision for his fifth win in seven outings. He may never be a world beater at 170 pounds, but Sadollah can provide an entertaining scrap when matched with an opponent willing to engage him on the feet or on the ground. Two other middle-tier welterweights will toe the line against one another when Neer meets Pyle at UFC on FX 3 on June 8. Pair the victor with Sadollah.

Igor Pokrajac vs. Cyrille Diabate: Pokrajac went toe-to-toe with a talented boxer in Fabio Maldonado and walked away victorious. The Croat absorbed some vicious body blows for his troubles but answered them with thudding power punches of his own and a series of well-timed knees from the Thai plum. A late bloomer at 33, Pokrajac has quietly rattled off three consecutive victories inside the light heavyweight division. Despite its considerable star power -- it features Jon Jones, Dan Henderson, Rashad Evans, Mauricio Rua and Lyoto Machida -- the 205-pound weight class lacks quality depth. That leaves the door open for fighters like Pokrajac. Diabate spent his latest appearance turning away two-division Ring of Combat champion Tom DeBlass and seems to be on a career path similar to that of Pokrajac. Hook them up.