LONDON -- James McSweeney scored a sensational 10-second knockout over the bewildered Roman Webber in the main event at Cage Rage “VIP” on Saturday at The Troxy.

After a wild exchange to open the fight, McSweeney (3-2) quickly clasped his opponent’s head and landed a brutal right knee that sent Webber (4-6) to the floor and out of the contest. A seasoned K-1 competitor, McSweeney has won back-to-back fights.

“This was just like going back to when I was fighting in kickboxing,” McSweeney said. “I had 120 kickboxing fights, and then I start losing in MMA. It’s affected my mentality, and now I’ve rebuilt myself. I’m training wrestling every day, and I want to make my mark.”

The devastating kickboxer will have every chance of do so, as his latest victory appears to have earned him a shot at Antonio Silva’s recently vacated Cage Rage world heavyweight championship. McSweeney will likely face the monstrous Neil Grove for the vacant strap in December.

Feelings ran high as the fighters entered the cage and exchanged a prolonged unfriendly stare before the action began. Olivier (16-8-1) dominated action on the ground and gave the judges an easy decision, as he bashed up Remedios and rendered the pre-fight posturing moot.

Appearing in his first MMA match in nearly three years, Remedios (15-7-2) pushed out to an early lead with precise striking. However, Olivier scored with a takedown late in the first and stole the round by landing several heavy shots on the floor. 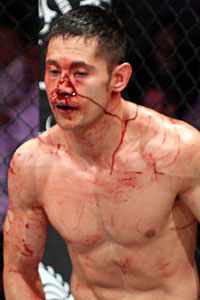 Jim Page/Sherdog.com
Robbie Olivier spoiled the anticipated
return of UK legend Leigh Remedios.
In the second, an ill-advised Superman punch from Remedios resulted in his absorbing a looping right hand from Olivier. Blood streamed from the bridge of Remedios’ nose, and the Cage Rage champion dominated the remainder of the bout en route to a well-deserved unanimous decision.

In other action, local fighter Brad Pickett brought his supporters to life and earned a hard-fought third-round stoppage against resilient Romanian Anastas Jazbutis.

Pickett (15-4) set the pace with some low kicks and punches; however, Jazbutis (7-5) refused to be intimidated and fired back with a pair of jump knees. As the fight reached its latter stages, Pickett cruised ahead on the scorecards with a series of hard body shots. A final left hook to the body sent the Romanian crashing to the canvas two minutes into round three. Pickett has now won five straight, four of them finishes.

The light heavyweight scrap between Jake Bostwick and John Phillips did not reach the judges.

Bostwick showed some improvement in his takedown game, as he repeatedly planted Phillips (7-2) on the mat and marked up his face with chopping shots. A pair of referee stand-ups did little to break Bostwick’s momentum, as he scored with some stout low kicks and forced his way into the clinch with punches.

However, in the second round, a botched takedown attempt left Bostwick (3-7) mounted, and Phillips capitalized. He landed a couple of hard shots and coaxed a tapout from his foe 2:46 into the round.

Mason (14-9) maintained control throughout the contest, as he repeatedly landed his right low kick and left kick to the liver. By the second round, Jansen was visibly tired and openly showing signs of discomfort. As the fight wore on, Mason pulled ahead on each of the scorecards and battered Jansen (3-4) around the cage on his way to a unanimous decision.

In middleweight action, the undefeated John Hathaway continued his meteoric rise up the UK’s MMA ladder, as he continually took down and dominated astute grappler Jack Mason. Usually comfortable on the floor, Mason (5-5) was subjected to a stream of blows from the marauding Zero Tolerance fighter.

After a pair of spine-rattling slams, Hathaway (8-0) made his strikes count and smashed his opponent into submission midway through round one.

Elliott reversed his way out of trouble early in the fight, but Mina (2-0) immediately worked for an omaplata and twisted his opponent’s arm to an unnatural angle. With his opponent’s limb trapped, Mina battered Elliott (2-4-1) with hammer fists and punches, opening the opportunity to choke his foe and end the fight three minutes into the first round.

A journeyman and a prospect put on a show at 170 pounds, though their match ended in disappointing fashion.

Michael Pastou and Nigel Whitear went to war, cramming a whole fight’s worth of action into 78 seconds. Pastou (3-0) immediately shot in for a takedown, but Whitear demonstrated some smart evasive footwork. A left hook from Whitear (6-14) temporarily halted his opponent’s charge, but he soon found himself planted squarely on his back. Unfortunately Whitear’s understanding of the rules was not up to par, and an illegal elbow to his opponent’s mouth resulted in his being disqualified.

In a heavyweight encounter that lacked finesse, Steven Hopwood chased down Neil Turner. Hopwood (1-0) enjoyed success on the floor and was able to control position for much of the first round. A left hook sealed the deal in the second round, and Hopwood followed Turner (0-1) to the mat, cinched a rear naked choke and delivered victory just two minutes in.

Meanwhile, Jamaine Facey dominated Newcastle fighter Scott Rogan on the floor for the entire first round. Facey (1-1) landed numerous damaging shots from the mount before he switched to an armbar and coaxed the tapout from Rogan (0-1) with only six seconds remaining in round one.

A lightweight affair saw Wesley Johnson tear across the cage and clinch with Matt Smith early. Once the fight hit the ground, Johnson (2-0) wasted no time, as he sank in a triangle choke and put Smith (1-2) to sleep just 44 seconds into the fight.

Finally, 18-year-old newcomer Ashley Pollard locked in a fight-ending kimura against Ben Smith. The end came 4:34 into the first round.