9:00 a.m.: Nothing like some matinee violence to get the weekend kicked off right! I must say I’m glad the UFC is back to starting its Sweden events at a time that’s convenient for the host country. The UFC on Fox card a couple of years ago where they started at 2 a.m. local time seemed like a slap in the face to the Swedes. This is perfect, though: classic fight time in Stockholm and not too ridiculously early for me.

9:18 a.m.: OK, I take back that last part. It is definitely too early for me to have to deal with Bruce Buffer wearing an ocular migraine. 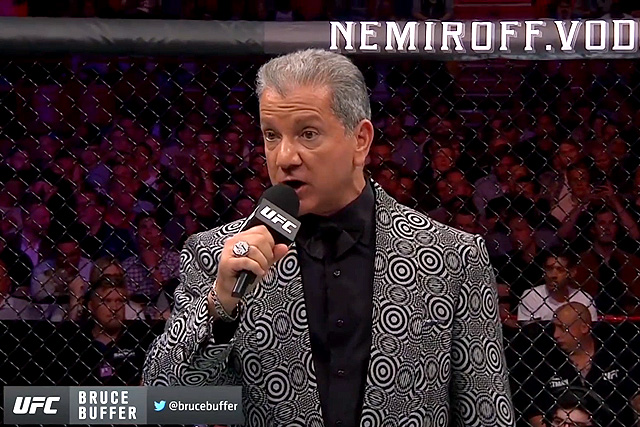 9:25 a.m.: It’s a bummer that this card lost the Volkan Oezdemir vs. Ilir Latifi co-main event at the 11th hour. Hopefully the injury to Latifi’s back is nothing too serious and he is able to return to the Octagon soon. Actually, better yet, maybe he can recuperate, then go sign with KSW, where I am at least 60 percent sure they would let him fight from horseback.

9:48 a.m.: In the UFC booth, Dan Hardy and Paul Felder are already committing war crimes against the names of some of these fighters. In the opening fight of the evening, the debuting Danilo Belluardo of Italy got called “bellwater” by Felder. Now it’s Devin Clark vs. Darko Stosic, and after one or two decent college tries, Hardy is apparently going to call him “Darko Sausage” for the remainder of the fight.

10:01 a.m.: Next up is a matchup of debuting women, as Bea Malecki takes on Duda Santanna. I must confess I’m not really sure what Malecki is doing here. She’s 2-0 in a very, very sporadic MMA career and was eliminated from “The Ultimate Fighter 28” with relative ease by Leah Letson. Of course, now that I’ve said that, she’ll look like a million bucks.

10:03 a.m.: Meanwhile, Santanna goes by the nickname “Cowboyzinha,” which if my Portuguese holds up, means “littlecowboygirl.” Nice. She also resembles Israel Adesanya just a bit.

10:08 a.m.: Not wanting to let Hardy and Felder have all the fun, UFC play-by-play man John Gooden persists in calling Malecki and Santana by their first names, but his posh accent makes them come out “beer” and “duder.” Yeah, it’s definitely early for this s---.

10:12 a.m.: Santanna shoots the ugliest double-leg takedown I have seen all year. Malecki lands in mount, takes the back, cinches up an extremely adequate-looking rear-naked choke, and gets the tap.

10:15 a.m.: Well, Malecki won, though didn’t quite look like the aforementioned $1 million. She looks pretty drawn at 135. If the UFC is going to keep women’s featherweight around, she might be a good candidate to go back there -- TUF 28 was a FW season -- to stay.

10:53 a.m.: OH MY DEAR SWEET LORD. Leonardo Santos destroys Steven Ray with a perfect counter right, then slips out of the arena, presumably into a waiting getaway car.

11:07 a.m.: Next up is Lina Lansberg vs. Tonya Evinger in a matchup of women who really should make friends after this. “Wait, YOU made it out of the first round with Cris Cyborg too?”

11:09 a.m.: Lansberg walks out to the strains of “Sail” by Awolnation. I can take or leave the band, but I support the choice of walkout music. Something about that big farty synthesizer and the dude screaming over minimalist beats probably goes pretty hard in an arena.

11:13 a.m.: Lansberg is introduced as the “Elbow Queen.” Am I losing my mind, or did she used to be the “Elbow Princess?” How did that promotion take place? Was it a question of age? Did she get married? Wait… did the previous monarch have to die? I confess that I’m largely ignorant of Swedish elbow royalty and its lines of succession.

11:15 a.m.: Just a reminder that Evinger is a very down-to-earth woman, and by “down-to-earth” I mean foul-mouthed, sexually aggressive and a two-fisted drinker. She is a likely first-ballot inductee for the Hall of [email protected]#$%&g Awesome when she eventually hangs ‘em up.

11:30 a.m.: Maybe that moment of hanging ‘em up for Evinger is coming sooner than I thought. Not because she lost to Lansberg -- making it three straight -- but because she didn’t seem like the old blood-and-guts Evinger, the one of whom I remember thinking that Cris Cyborg would have to kill her to get her out of there. Add to that the fact that she’s apparently moved here to Houston and started working in the O&G industry, and maybe she’s not that long for this sport. Well, if the UFC cuts her and she wants to keep fighting, Invicta FC would surely take her back with open arms, and there’s a decent chance she could actually win back her belt there. Or if she retires, now that she’s in H-town, she could become the first HOFA member to be inducted in person.

11:35 a.m.: The final prelim bout is Rostem Akman against Sergey Khandozhko in a battle of UFC debutants. Akman is the hairiest fighter, and possibly the hairiest human, I have ever seen. He makes 2004 Andrei Arlovski look like Stefan Struve. He looks like Belal Muhammad in a King Kong costume.

11:59 a.m.: Khandozhko beats Akman and his fursuit via unanimous decision. More importantly, the prelims are now over, so Buffer should be changing into a different (and hopefully less eye-watering) blazer. 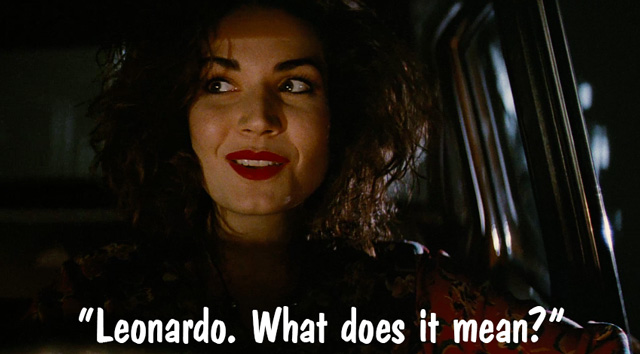 
12:02 p.m.: The guy who played Al Borland on “Home Improvement” is on my TV screen, trying to sell me a garden hose. Good grief, this commercial is 95 percent penis jokes.

12:06 p.m.: Did Felder just say that Anthony Smith doesn’t look intelligent? And why, why, why is Buffer still wearing the same blazer?


"If you stare into the abyss long enough, it stares back." - F. Nietzsche

12:16 p.m.: One or the other of the Teymur brothers really needs to nickname himself “Ex-Lion” and walk out to this. They’d have to walk pretty fast though.

12:20 p.m.: John Gooden sees a couple of hook-heavy exchanges and makes a Mike Tyson reference. Give me a break, Gooden. The only Tyson-esque thing in the UFC is the way some fighters treat their significant others. Of all the what-if fantasy MMA careers I’ve seen people argue about on the forums, the obsession with Tyson is one of the most inexplicable. How would Tyson have done at MMA? About like you’d expect a 5-foot-10 heavyweight not named Daniel Cormier to do. He’d be a cross between Cormier without the wrestling and Pat Barry without the kicks.

12:30 p.m.: This fight is a dud. “The other Teymur brother” looks likely to pick up his first UFC win, but yuck. When was the last time a debuting Korean fighter was the less aggro man in the Octagon?

12:34 p.m.: Teymur picks up the unanimous decision win and… did he just sing a couple bars of “Despacito?” This card is so weird.

12:44 p.m.: Next up: Damir Hazdovic vs. Christos Giagos. Both men are answers to interesting trivia questions: Hazdovic is the answer to “Who is the UFC’s most recent signing from Bosnia,” while Giagos is the answer to “What if a white guy went to Lorenz Larkin’s barber?”

1:33 p.m.: Oh man. Makwan Amirkhani pelts Chris Fishgold with a cleeeeeean shot to the pills. He’s going to need one of those suction cup things auto repair shops use to pull dents out of body panels.

1:37 p.m.: Amirkhani taps out Fishgold with an anaconda choke, set up at least in part by the anaconda kick a few minutes ago.

1:55 p.m.: The co-main event of the evening features Aleksandar Rakic taking on Jimi Manuwa, who is on a three-fight skid and in need of some redemption.

1:57 p.m.: …redemption he will not be finding tonight, as Rakic absolutely starches him with a left head kick. Oh my goodness. Immediate front-runner for “Knockout of the Year.”

Aleksandar Rakić (12-1) announces his contendership, corpsing Jimi Manuwa with a horrific, first-round head kick! The Austrian boosts his tear to 12 straight with 10 finishes, nine by knockout, and eight in round one. #UFCStockholm pic.twitter.com/unvZMRNef7

1:59 p.m.: Manuwa is still out, peaceful as a sleeping baby, while Rakic stomps around the cage, engaging in the most exuberant celebration over an unconscious opponent this side of Tank Abbott-John Matua.

2:04 p.m.: The crowd is letting Rakic have it, and he apologizes for the celebration. The fact remains he’s on a brutal tear in the UFC. Meanwhile, Manuwa… I hesitate to call on fighters to retire, but at the very least he needs to retool. That’s his third knockout loss in four fights, two of which took exactly 42 seconds. It’s clear he’s getting into firefights that his reflexes and chin can no longer carry him through safely.

2:06 p.m.: Also, for those keeping track at home, British fighters are now 0-3 on the night. Luckily, we have Anthony Joshua on deck, ready to redeem Great Britain with an easy walkover against late replacement title challenger Andy Ruiz, Jr. Hooray for boxing.

2:11 p.m.: Time for your main event: one of the most accomplished fighters never to win a title (yet) in Gustafsson, taking on one of the most unlikely late bloomers in recent memory in Smith.

2:17 p.m.: This is the UFC’s sixth trip to Sweden. Gustafsson has headlined four of them, including the last three. The pressure to perform in front of his countrymen must be incredible. I’m still thinking of him with tears in his eyes after getting blown out by Anthony Johnson in front of a crowd twice this size.

2:27 p.m.: What is with Gustafsson’s footwork? He keeps backing into the cage for no apparent reason, then dashing away.

2:29 p.m.: No truth to the rumor that Gustafsson is wearing a FitBit.

2:43 p.m.: And there we go. Smith takes Gustafsson’s back off a blown takedown, sinks in the rear-naked choke and gets the fourth-round finish. Ericsson Globe Arena is dead silent.

2:50 p.m.: Gustafsson takes off his gloves and drops them on the canvas. “The show is over, guys.” If this is a real thing and not just driven by the emotions of the moment, thanks for everything, Gus.


“Losing in front of your home town
The crowd call your name
They love you all the same
The sound, the smell, and the spray
You will take them all away
And they'll stay till the grave”