Scoring with a nice right hand after he was dropped by Riggs, Misaki finished the bout with a flurry of shots and forced the stoppage 2:29 into round two. Misaki (21-8-2) entered the fight -- his first in the cage and second in the U.S. -- hoping to make an impression on American fans.

The two circled for the first minute and a half. With both men reluctant to engage, a restless crowd became vocal in its displeasure with the lack of action. Misaki scored with a nice right low kick, and the dance resumed once more. Another low kick put Misaki ahead in the first round, and Riggs seemed unable to let his strikes fly until he connected on a short left cross.

“In the first round, I was just feeling him out,” Misaki said through an interpreter. “Both of us were figuring out what to do.”

The second opened with more tentative offense from the two veterans, as Misaki landed a couple of body shots in the opening minute and Riggs stalked without firing; the American then ate a body shot before connecting on a straight left. Riggs drilled Misaki with a big left moments later. The UFC veteran pounced and landed a kick, but Misaki countered with a pinpoint right cross that drove Riggs halfway across the cage and onto his back. The Japanese middleweight seized the chance to finish the fight and rained down shots -- though many missed the covered-up Riggs -- until the match was stopped by referee Josh Rosenthal.

“I’m happy with the win,” Misaki said. “This is a famous place to fight.”

Riggs (28-11) was unhappy with the Rosenthal’s decision to intervene and claimed he had never before complained about a stoppage.

“I was hit with one punch the whole fight -- the one he knocked me down with,” Riggs said. “I had my hands covering my head. But it is what it is.”

On the heels of his surprising decision victory over Gilbert Melendez, Strikeforce lightweight champion Josh Thomson was impressive against Ashe Bowman and secured a quick finish in a non-title tilt.

Thomson (16-2) used low kicks early to set the offensive tone. He then delivered a quick right hand that sent Bowman falling against the cage. Thomson pounced and scored with a flurry of punches before the bout was stopped 1:14 into the first round.

“When [referee] Herb [Dean] stepped in,” Thomson said, “I wasn’t sure if he was stopping it or checking to see if he was alright.” 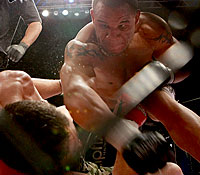 Devela -- who landed a head kick in the second and a flying knee in the third -- drove home a low right kick in the final round, but Martin (18-5) answered. The heavy-handed Chicagoan dropped Devela (9-2) with a sweeping left hook and followed up with a right hand, forcing Dean’s intervention 2:08 into round three.

“You have to take your hat off to Cory Devela; he fought a smart fight,” Martin said. “I’d been catching him, but I was just grazing him. I knew it was just a matter of time.”

Perhaps no one on the card impressed more than Mitsuhiro Ishida.

One of the world’s premiere lightweights and the first man to defeat Melendez, Ishida (17-4-1) needed little more than a minute to ditch Justin Wilcox. The Japanese standout secured a fight-ending armbar 1:21 into round one, as he won for the 11th time in 13 bouts. Wilcox (5-3), meanwhile, saw his four-fight winning streak grind to a halt.

In other action, former Bodog Fight middleweight champion Trevor Prangley earned a workmanlike decision victory against a game but outmatched Anthony Ruiz. Judges scored the bout 30-27, 30-26 and 29-28 in Prangley’s favor.

“He’s improved a lot since the first time I fought him,” said Prangley, who submitted Ruiz at a Strikeforce event in October 2006. “I always like to finish fights. He’s a good fighter and a tough guy.”

Ruiz (21-12) forced the South African against the cage early and attempted to work in some knees. Prangley landed a nice left knee in a subsequent exchange, but Ruiz battled back and landed a right hand that buzzed his opponent. A late injury replacement for Renato “Babalu” Sobral, Prangley took down Ruiz and mounted him in the first round, securing back control as Ruiz attempted to spin out.

The pair battled for hand position for more than a minute, as Prangley was unable to sink in the choke. Ruiz escaped into Prangley’s guard, only to have the South African spring up as the pair threw punches, most of them missing, to end the round. Prangley (18-5) continued to pressure and nearly cinched an armbar in the final 20 seconds of round two.

Ruiz missed a big right to open the final stanza, as Prangley slipped the punch and shot in for another takedown. Bleeding from his left eye, Ruiz shielded himself as Prangley worked punches from the top. Ruiz stood, only to be taken down once more. Prangley landed a pair of hard knees to the body, as Ruiz was unable to improve position. 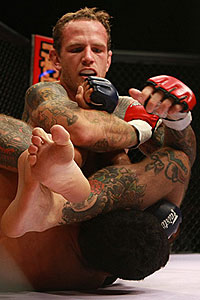 Dave Mandel/Sherdog.com
Luke Stewart (top) submits Jesse
Juarez in the first round Saturday
at the Playboy Mansion.
One of the Strikeforce promotion’s prized young prospects earned his way back into the winner’s circle, as Luke Stewart submitted Jesse Juarez with an armbar 4:55 into the opening round.

Juarez pinned Stewart (6-1) against the cage in the opening seconds, as the pair hit the mat in a scramble. Juarez wound up in top position. Stewart rolled for a kneebar, but Juarez (6-5) defended, and the fighters eventually locked themselves in chest-to-back stand-up clinch. Stewart then scored a takedown and secured mount, dropping a few shots before he transitioned to an armbar and coaxed the tapout.

In a welterweight scrap, Brandon Magana scored a split decision win against the previously unbeaten Brandon Thatch. Magana (6-1) secured numerous takedowns and mounted Thatch (3-1) in the third. He also threatened with a choke late in the fight. All three judges scored the match 29-28, two of them in Magana’s favor.

Finally, Jesse Gillespie earned a split decision nod at Dave Martin’s expense in a light heavyweight tilt. Two of the judges scored the bout 29-28 in Gillespie’s favor; the third saw it 30-27 for the winless Martin (0-2). The victory snapped a two-fight losing streak for Gillespie (2-2).