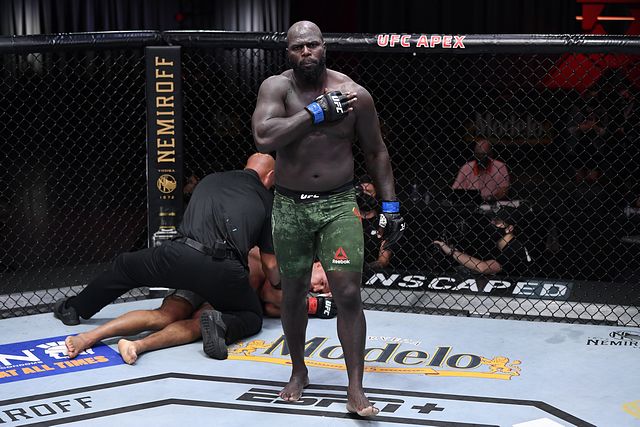 From his Ultimate Fighting Championship debut to his main event bout against Augusto Sakai this past weekend, Jairzinho Rozenstruik has been a very misunderstood and underappreciated fighter. If one doubts this, look at the betting lines for these contests. He closed as a roughly +130 underdog for his debut against Junior Albini, and then alternated between being a small favorite to even money, from -110 to -150, against Andrei Arlovski, Alistair Overeem, Junior dos Santos and most recently Sakai — all knockout victories. While he lost as a considerable +200 or greater underdog to reigning champion Francis N'Gannou and possible future champion Ciryl Gane, one would have made a pretty penny simply betting the knockout artist from Suriname in every contest. The natural question being, why is Rozenstruik perpetually underrated?

Well, it has everything to do with his unique fighting style. Rozenstruik looks downright mediocre and limited as a martial artist...right up until the moment he knocks out his opponent. To understand this, let's look at the striker's skills and approach to combat more closely. Rozenstruik is not a man interested in winning a decision. He never throws strikes to score points or to “stay busy,” as referee Herb Dean once implored him to do against Gane. Rozenstruik only attacks to knock out his opponent or to set up the knockout. If no such opportunity presents itself, he is perfectly fine sitting and waiting.

Rozenstruik's defensive grappling has improved a lot over his time in the UFC, but he is still largely looking to stall in such positions. Furthermore, when he is on his back on the floor, he is fine sustaining a certain amount of damage from being ground-and-pounded, leaning on his titanium chin, so long as he doesn't get submitted.

So what does that produce? A fighter who frequently looks like he is doing little and being badly beaten for large portions of the match. That is, right until that critical moment when he wins via knockout. Against Albini, Overeem, and even against dos Santos, there were long periods during which Rozenstruik looked to be painfully out of his depth, being drubbed by more skilled, more complete martial artists. Thus, it's easy for observers to dismiss the explosive combinations that lead to the knockout as being mere “flukes”, not realizing that his entire fighting style is based around finding the opportunity for those “flukes,” and then executing. However, it's difficult to reconcile a fighter looking average for over 90% of a bout with looking so spectacular at the very end, and so, many conclude that Rozenstruik is just a guy with freakish power who “gets lucky.”

But that is not so. For one, Rozenstruik has excellent technique on his punches and kicks. They're not just powerful, but thrown with perfect mechanics, economy of motion, and harmony between every part of his body. They're also viciously accurate and fast. Many heavyweights possess power, but few have the incredible precision Rozenstruik possesses, nor are they as quick. Just look at the pinpoint accuracy and speed of his knockouts against Crowder and Arlovski. How many heavyweights would have touched an opponent right on the button under those circumstances, including moving backwards? Lastly, Rozenstruik doesn't just throw one or two powerful strikes, but he comes up with beautiful combinations. Defending against solitary blows is much simpler than defending against the combinations Rozenstruik throws out, seamlessly integrating kicks, knees, and punches in an unpredictable, deadly flurry. And the man from Suriname is not being passive for the hell of it. He is very carefully looking and probing for an opening.

All of this coalesces together to make his unique style effective. Rozenstruik can afford to be passive and even give away entire rounds because he knows that when the opportunity arises, the combination he throws will be powerful, fast, and accurate enough to get just about any opponent out of there. And similar to other great knockout artists, like Derrick Lewis, Rozenstruik carries his power all throughout a fight, no matter how tired he is, so there is never a safe moment for an opponent.

Of course, his style has its drawbacks, and can be overcome. Ngannou did so in a very aggressive, risky manner, showing that his combination of speed, power and chin was even greater than Rozenstruik's, taking several flush connects from Rozenstruik when charging forward, being unfazed, and knocking him out in the process. Meanwhile, Gane defeated Rozenstruik in a very prudent, careful manner, using an excellent jab, powerful kicks, and his phenomenal movement and defense to tag Rozenstruik while being ready to jump out of range any time his opponent exploded forward with strikes. Moreover, Gane wisely used takedown attempts to tie Rozenstruik up when he came forward, which, even when unsuccessful, stifled any flow to his offense. Gane has good cardio, and he certainly needed it against Rozenstruik, as he had to be wary for all five rounds with this approach. Alistair Overeem found out the hard way that Rozenstruik retains his knockout venom for all 25 minutes.

Nevertheless, Rozenstruik offers a challenging, unique test for the heavyweight division, one that only the very best have managed to pass. Next time you hear him unfairly dismissed as simply a passive slugger, you will know better!