Like virtually anything in life, mixed martial arts has its yin and its yang. The ever-changing landscape of the sport offers fighters, fans and media monthly talking points. In May, there was plenty to be upset about and enough to feed the optimists, too. Here are just a few looks at the good, the bad and the ugly.

Remember the Kimbo era? Neither do I.

Talk of a new era in sport is rare and even rarer when it’s authentic. But when an undefeated challenger knocks out an undefeated champion and yells “Karate is back” into a microphone, it’s difficult to ignore. Machida’s concealed weapon style and an apparent surge of popularity signals a steady reign may be in order following his May 23 victory over Rashad Evans.

The division has suffered -- or benefited from -- a merry-go-round since Chuck Liddell missed the mark on a fifth successful title defense. Emphatically coming into his own with a championship at 15-0, Machida highlights traditional martial arts elements that made them cool. The UFC has a unique opportunity to cross-pollinate the video game generation’s martial art with its very own Karate Kid. Both the cyclical nature of title tenures and the Brazilian’s evolved style suggests the “Machida era” is not just blind fervor.

Female MMA Shines Despite Less Time in the Spotlight

There’s a female fight world outside of superstar Gina Carano and her lethal foil “Cyborg” Santos.

The back and forth battle between Sarah Kaufman and Miesha Tate at Strikeforce Challengers on May 15 was strategic, fierce and all encompassing. It also proved women should fight three five-minute rounds like their male counterparts. 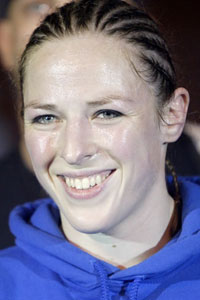 Jeff Sherwood/Sherdog.com
Kaufman vs. Tate was fierce.
When Kaufman was smashing Tate during the first of three three-minute periods, a bell came two minutes early to the party, potentially changing the outcome of Kaufman’s decision victory. It happened again when in the second Tate earned a late momentum shift and saw it end abruptly thanks to an unwelcome ding ding.

At some lower levels, male combatants fight three three-minute rounds as well. However, Tate-Kaufman was a co-main event on a Showtime broadcast. That solidifies their worth while athletic commissions insisting on three-minute rounds implicitly state that female fighting, even if it’s on a grand stage, like say, CBS or Showtime, is second tier. That’s simply not the case.

For a sport borne of nonstop action, why deprive fans of six more potential minutes of a great fight like Tate-Kaufman? The round length may leave viewers disgruntled, but Tate and Kaufman staked their claim loudly -- the ladies can reel in Fight of the Night honors too. Every female fight with the action and appropriate stage Tate and Kaufman enjoyed brings us one step closer to three five-minute rounds.

May Tour Stops in Upset City

Tournaments breed upsets and memorable moments. Take Joe Warren’s split decision over Norifumi "Kid" Yamamoto’s during the second round of Dream’s featherweight tournament on May 26 or his win over former Zuffa-era WEC champion Chase Beebe in his mixed martial arts debut back in -- wait for it -- March. Knocking off one of the best in the world when most fighters are competing in bingo halls screams of future star. Factor in his Olympic pedigree and it’s scary to think he doesn’t fade at higher levels.

Toby Imada’s backpack of doom (credit Jake Rossen for the catchy, apt phrase) upset over Jorge Masvidal in Bellator’s lightweight tournament makes May a month for improbable upsets. Frankie Edgar versus Sean Sherk? Not a major upset, but I’ll take that checkmate.

One Strike and Canseco Is Out

Canseco, author of famed tell-all book “Juiced,” has more excuses for his loss than his shape shifting from a “Bash Brother” to simply bashed, brother.

If he keeps fulfilling Dream’s sadistic matchmaking whims, that nickname may hint at an oncoming pugilistic dementia. Please, for Mark McGwire’s sake, hang up the blue four-ounce gloves.

When Tito Ortiz entered the Octagon to Limp Bizkit’s “Break Stuff,” it was the perfect blend of mixed martial arts and music. Then music passed by Limp Bizkit and the UFC didn’t get the memo.

Once self-titled the “Most Hated Band in the World,” the Fred Durst-fronted group may have, in fact, become the most hated band in the world. Look, I’m not above turning my red Yankees hat backward, hanging out with Method Man and rocking Woodstock, but kicking off a historical event like UFC 100 by handing a microphone to a man who once rhymed “here” with “here” and thought he could do The Who’s greatest song justice (“Behind Blue Eyes”) is an injustice.

The UFC has pulled out all the big stops, hosting a convention and a grappling tournament starring cult hero Rumina “Moon Wolf” Sato, so why would they hire a band with the cultural relevance of Y2K?

He may not be scoring goals like Cristiano Ronaldo, but Mike Aina sure did mimic the soccer star’s acting when he exaggerated his injury against Billy Evangelista in the main event of Strikeforce Challengers. It’s a terrible practice to call a fighter’s heart into question, but replay footage clearly placed Evangelista’s knee on Aina’s arm, not his temple.

When discussing the incident post-fight, “Iron Mike” touched the opposite side of where he was allegedly struck. If Aina was legitimately unable to continue, then it’s still a terrible way to end a fight, especially as Evangelista’s first loss.