Gegard Mousasi did not want to go to the ground with Ronaldo “Jacare” Souza, but that’s where he knocked out the jiu-jitsu phenom Tuesday in Saitama, Japan, in the Dream middleweight grand prix finals.

Mousasi had come out in a low stance, which could not keep Jacare from wrapping him up in a double-leg takedown to start the fight. Jacare was working to pass when Mousasi shoved him away. At that point, the Brazilian jumped back in with a right hand, but a kick that Mousasi had launched from his back landed first and it landed on Jacare’s chin.

Suddenly Jacare was lying limp, and the fight was over after just 2:15. Mousasi had to slide out from under his beaten opponent to calmly take in his victory.

“In this tournament, I have become friends with Zelg (Galesic) and Jacare,” said Mousasi, who at 23 years old has 24 victories. “They helped me. I’m happy that I won, but I consider them as my friends, so it was hard for me to (defeat) Jacare.”

Earlier in the evening, Mousasi also defeated Melvin Manhoef in a fight he had been requesting for some time.

Manhoef sprawled well on Mousasi’s first takedown, but the Armenian persisted until he had the dangerous kickboxer on the ground. Almost immediately on the mat Mousasi had his opponent’s back and was punching to the side of his head. Manhoef’s escape from back control only led him into a triangle choke, which Mousasi had used to finish Denis Kang in the grand prix opening round in April. 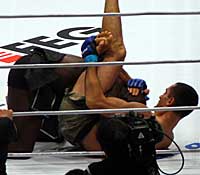 Daniel Herbertson/Sherdog.com
Gegard Mousasi submits Melvin
Manhoef with a triangle choke.
In defense, the powerfully built Dutch fighter lifted Mousasi high above his head, reminiscent of Quinton Jackson’s slam of Ricardo Arona in Pride. Manhoef’s slam didn’t generate the same power, though, and while in the air Mousasi was grabbing his foot to secure the hold through the fall. Shortly after Mousasi hit the canvas, Manhoef was tapping at 1:28.

Manhoef said he was surprised that his adversary had taken him to the ground after saying he would fight him on the feet.

“I thought he would stand with me. I thought he had balls, but he didn’t,” said Manhoef, whose five-fight win streak was snapped in defeat. “In the end, he won fair and square. It’s my own fault that I did not take in consideration that he might also go to the ground.”

Manhoef had expected Mousasi to try to ground the fight only after discovering that he wouldn’t survive standing. He credited Mousasi’s long legs for the triangle but also criticized himself.

“It was a little bit stupid of me because I was too anxious, I think, to ground and pound,” he said. “It’s my own fault. I cannot blame nobody. I’m disappointed by myself and I disappointed my team and everybody around me.”

Jacare had advanced to the final by defeating Zelg Galesic. Galesic threw one kick before Jacare had put him on his back. The Brazilian jiu-jitsu black belt pinned Galesic’s ankle to the floor and effortlessly passed his guard, struck well from side control, went to knee-on-belly briefly and then mounted the Croatian fighter.

Galesic rolled out but left his arm behind -- a mistake Souza would not let him survive. Jacare snagged the limb and extended it for a screaming tap at 1:27.

“Usually people can’t armbar from there,” Galesic said. “But he did some sort of leg triangle on my arm, and immediately my arm was popped out. In one second, it was finished.”

In the middleweight grand prix reserve bout, Andrews Nakahara gave Dong Sik Yoon trouble from the start. With a background in kyokushin karate, Nakahara moved well and peppered his opponent with kicks. Yoon grounded the fight midway through the first and took the mount, where he tried numerous chokes with his gi.

In the second round, Yoon came out of his corner throwing haymakers. Nakahara, clearly the better striker, countered with a right hand that dropped the Korean fighter and then forced a stoppage on the ground 30 seconds into the period.