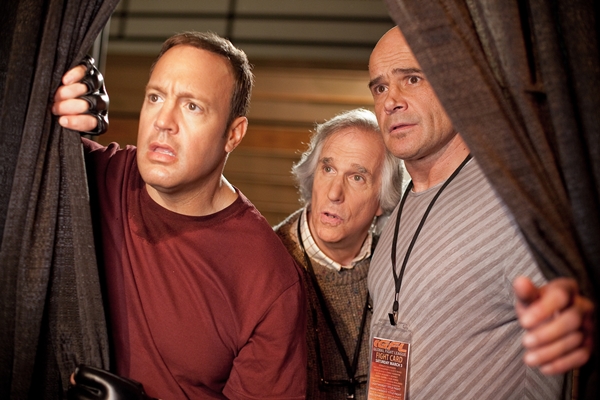 Know it or not, you’ve already seen “Here Comes the Boom,” probably more than once. Some Bad Guys want to take away a Beloved Thing, and it’s up to a Lovable Schlub who nobody believes in to find a way to save it while simultaneously romancing an Attractive Lady.

That said, if you fiend for all things MMA and aren’t put off by formula -- or if you need something PG-rated to watch with the youngins -- you could do worse than “Here Comes the Boom.”

The schlub and eventual purveyor of said boom is Scott Voss (Kevin James), a motorcycle-riding biology teacher and former Div. I wrestler who decides to get involved when budget cuts threaten to shut down his school’s music program. This leads Voss to a side job teaching a citizenship class -- it’s funny because his students don’t talk English good -- where he meets and comes under the tutelage of retired Dutch fighter Niko (Bas Rutten). At first, the plan is for Voss to simply lose fights and collect paychecks, but pretty soon ... well, you know. 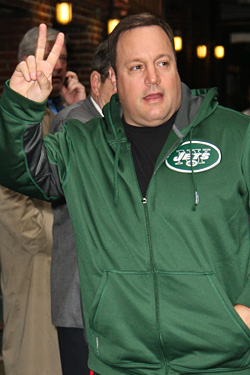 Listen: Kevin James interview on SRN.
Rutten, a real-life MMA pioneer turned real-life cartoon character, takes on a central role and knocks it out of the park, stealing scenes while playing a barely exaggerated version of himself. Anyone who’s watched “El Guapo” commentate a Pride Fighting Championships show or ham it up behind the desk on “Inside MMA” knows his is a persona made for the movies anyway. For those unfamiliar, he must come off as a loveable, goofy hulk. For those who’ve seen him palm-strike guys’ faces or remember his ill-fated mentoring of “Kimbo Slice,” Rutten’s presence makes the whole premise easier to buy.

For the MMA connoisseur, there is a steady stream of cameos, including everyone from referee Herb Dean to cutman Jacob “Stitch” Duran. Aside from Rutten and Joe Rogan, who plays the role UFC President Dana White declined, there’s significant screen time for trainer Mark DellaGrotte and light heavyweight Krzysztof Soszynski, whose fight against Brian Stann serves as a catalyst for Voss’ own career. Despite his now-infamous promotional appearance, Jason Miller’s appearance as “Lucky” Patrick Murphy is brief and to the point, and, for once, he’s on the receiving end of some outlandish behavior.

In-jokes abound, too. One particularly deep cut name-checks Don Frye and Yoshihiro Takayama’s classic 2002 slugfest, while a glimpse into the future shows that UFC 176 will be headlined by a Junior dos Santos-Shane Carwin title fight. Not that anyone needs to see the rematch, but a small part of me hopes it comes to pass. Of course, any fan knows where the climax of an MMA Cinderella story has to take place, but by the time the gladiator music hits, it doesn’t much matter.

There will no doubt be message-board criticism of the way MMA is depicted on the whole, but James’ affection for the sport is obvious throughout and the movie is spot-on in many regards. The scenes set at midsize local events feel particularly familiar, and the obstacles that pop up in Voss’ bouts -- gross mismatches, cage malfunctions, fighting outdoors -- all mirror actual oddities. A fight goes viral on YouTube, someone quotes a Bible verse, a lot of bad music is played. If anything, it’s the script’s cheaper gags that help maintain MMA’s lowbrow reputation.

“Here Comes the Boom” does succeed in delivering some legit LOLs, many thanks to Rutten and a silver-maned Henry Winkler as the timid, put-upon music teacher. Even with a simple storyline, it gets confusing at times, like it can’t decide which message to send. Nietzsche is referenced and the importance of great music is stressed repeatedly, but then P.O.D. blares and projectile vomiting is used to advance the plot. The moral of the MMA story is that you can do alright as a fighter so long as you’ve got a granite chin and heavy hands. The moral of the story on the whole, as near as I could tell, was education and God and teamwork and America.

Then again, it’s a PG-rated MMA movie called “Here Comes the Boom.” Maybe it doesn’t really need to be dissected.