MONTREAL -- Hatsu Hioki demonstrated Friday why he is regarded as one of the top featherweights in the world.

In the opening seconds of his TKO 35 championship bout against a re-invented Thierry Quenneville, Hioki found himself semiconscious on the mat but not out after a lead left hook had caught him flush on the chin.

“It was a very strong punch he threw, and for one second, I was out,” Hioki told Sherdog.com through a translator. “I just wanted to see how it went, and go with the flow.”

For Quenneville, it seemed like the opportune time to pounce on the fallen champion.

“As soon as I hook him and rock him, he went on the ground. I should have just kept my distance and let him get up or from there see if I could finish him on the ground or not,” Quenneville said. “Suddenly he took me to his ground fighting, and so that’s where it went wrong.”

Hioki showed his true warrior spirit and kept the fight where he needed it, forcing Quenneville to fight off submission after submission until the Quebec native finally fell prey to a textbook triangle at 4:14 of the opening round. 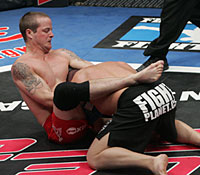 Al Quintero/Sherdog.com
Noah Thomas submits Adrian Wooley.
Noah Thomas shocked the Canadian MMA world with a first-round submission win over the previously undefeated Adrian Wooley to take the TKO bantamweight title. Thomas (12-5), spent much of the fight on his back against the dominant wrestler, but the fight turned on a dime when a right roundhouse kick delivered from his back connected flush. A noticeably stunned Wooley staggered back and Thomas pounced, locking in a tight modified guillotine to elicit the tap at 3:22 of the first round.

After his win, Thomas was understandably emotional as he had to deal with much more than a wrestler in Montreal.

“My father died as I was on the plane coming here, and I dedicate this fight for him,” a visibly overwhelmed Thomas informed the crowd upon receiving he championship.

Heavyweight Steve Bosse was triumphant in his return to action despite having a new opponent lobbed his way for the third time. Stepping up on two days’ notice for Lance Evans and Sherman Pendergarst was “Iron Leg” Sebastien Gauthier. Gauthier, some may recall, had petitioned to the crowd and TKO brass after Bosse’s MMA debut for a fight against the renowned hockey brawler. On this night, he got his wish.

Despite being rocked by a Bosse right hand, Gauthier was successful in taking the bout to the mat, where Bosse’s inexperience showed. After being mounted, Bosse immediately gave up his back and Gauthier worked to finish with the choke.

Bosse hung tough, reversing to top position, where he stood over Gauthier and patiently picked his shots and blasted away at Gauthier’s head. When Gauthier showed no signs of improving position or intelligently defending himself, referee Marc-Andre Cote halted the bout at 3:59 of the first round.

With a potential shot at the TKO welterweight title on the line, UFC veteran Forrest Petz battled the talented TJ Grant. Grant (12-2), controlled the pace of the fight in the first, taking Petz to the floor, where the Halifax native enjoyed a slight advantage. At one point, Grant had Petz in some trouble when he took his back and worked feverishly for the choke, swiftly switching to the armbar. Petz, however, escaped and finished the round on top in Grant’s guard.

The second stanza saw Grant use his strong clinch to deliver hard knees to the body of Petz and set up the takedown. Once back on the ground, Grant’s dominance continued as he put Petz in a number of precarious positions before finally locking in the fight-ending arm-triangle that forced a tap at 3:55 of the second round.

Sean Pierson returned from a 15-month layoff and showed few signs of rust. He hammered the grossly overmatched Jacob MacDonald into submission via strikes at 1:45 of the first round and punctuated the victory with his trademark back flip from the top of the cage.