EDMONTON, Alberta -- Emanuel Newton used everything in his arsenal to defeat David Heath on Friday in the main event of Maximum Fighting Championships 18 at the River Cree Resort and Casino. After battering Heath around the ring for the entire fight, Newton finished the fight late in the second round with a rear-naked choke.

From the opening bell, Newton brought the fight to Heath. Newton went from one submission attempt to the next and had back control for a good portion of the round, but Heath made it to the bell.

Newton, 24, was in control for most of the second round. Heath’s only real attempt at any offense came in the form of a footlock, which Newton countered simultaneously with his own attempt. Newton maneuvered to side control and rained down blows, securing the choke shortly after at 4:42 into the round.

With his tenth win in a row, Newton booked himself a shot at the light heavyweight championship, and will get his chance against titleholder Roger Hollett at the next MFC event on Dec. 5.

In the semi-main event, local star Ryan Ford returned to the win column as he defeated experienced veteran LaVerne Clark with a guillotine choke 2:30 into the second round.

The first round was a very even round with both fighters having their moments on the ground. Ford connected with some of his trademark slams that brought the sold-out crowd to their feet each time.

In the second set, Ford took the reigns. Following a break in the action where Clark was deducted a point for escaping the ring, Ford sensed victory was at hand and finished with a guillotine choke from top position.

"It was a little bit frustrating with him grabbing the ropes and escaping the ring but whatever, it’s a fight," said Ford, who improves to 7-1 with the victory. "I give him credit, he was tough. But I saw the opening and I took it. My ground game is getting slick."

Ford meets Nabil Khatib on Oct. 25 in Calgary, and is then slated to rematch Pat Healy for the welterweight title on Dec. 5. Ford succumbed to a third-round armbar during their first bout last July. 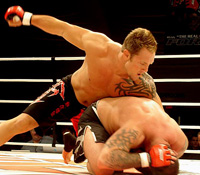 Rob King/Sherdog.com
Jay Whitford surived an early
beating from Aron Lofton (top)
to capture victory in round two.
"I learned from that fight to finish the fight and I won’t let him beat me again," said Ford.

Simon Marini made his MFC debut a memorable one, as he and Fit NHB’s Gerald Lovato went toe-to-toe for the 15-minute duration. Marini was rewarded with a unanimous decision for his efforts.

The two exchanged hard, clean blows for the entire fight, only going to the ground for a minute in the first round. The judges scored the bout 29-28 across the board, a decision that upset Lovato’s corner when the scores were read. Sherdog scored the bout a 29-29 draw.

"It’s way more fun to stand up and entertain the crowd so that’s what I did," said the 22-year-old product of Hamilton, Ontario. "I’m more of a technical boxer and I knew he would be willing to stand so that’s what we did. I knew I would be stronger and my punches were cleaner which won me the fight."

Tom Vaughn, head trainer to Lovato, expressed his disappointment with the decision.

"I was shocked when the scores were read. I thought it was going to be 30-27 for us. I thought that there was not one aspect of that fight we didn’t win. Gerald landed the better blows and won the little bit on the ground. Yeah, it was a great fight, but I though for sure we should have gotten the decision." 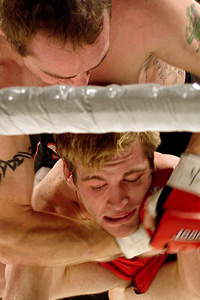 Rob King/Sherdog.com
Ryan Machan submits Gavin Neil
with a rear-naked choke.
Jay Whitford was getting beaten and bruised by Aron Lofton, but hung in there and managed to turn the bout around in the second round. After absorbing some punishing blows from the heavy-handed Lofton, Whitford turned to his ground game, managing to get in a deep side choke. Lofton tapped out 3:11 into the second round. The submission won Whitford the “Submission of the Night” award.

Chris Camozzi picked up his second win inside the MFC ring, despite suffering an arm injury in the second round that everyone in the building noticed. Following a break in the action against Elliott Duff, Camozzi winced in pain and held his left arm close to his chest. He waived off the referee and continued to fight, although with limited effectiveness from his left hand for the rest of the fight. Initial reports were that his shoulder had popped out early in the second round.

Despite the injury, Camozzi went on to win a unanimous decision with 30-27 scores across the board.

One of Canada’s best Brazilian jiu-jitsu black belts in Josh Russell made his MMA debut a successful one, as he defeated Mike Gates via unanimous decision. Calgary, Alberta’s Russell, who is the jiu-jitsu coach of UFC vet Jason MacDonald, controlled the fight on the canvas en route to a decision in a fight that was much closer than the 30-27 (twice) and 29-28 scores would seem to suggest.