AMSTERDAM, Netherlands -- The Russian Red Devil squad crushed Team Holland in a 4-1 victory on Sunday at the M-1 Challenge 2008 Finals, a tournament that spanned nine months and pitted 10 teams against one another over 10 events on four continents.

Wrestling out from underneath Gibbs in the early going, Oleinik nailed two big takedowns to keep a waning Gibbs at bay until he could secure the head and arm choke.

Red Devil light heavyweight Mikhail Zayats pummeled last-minute replacement David Haagsman standing, then grounded the Holland fighter with a trip before taking mount. Zayats pitched off the side for the armbar on Haagsman, who took the bout on Sunday after teammate Kamil Uygun fell ill. An overwhelmed Haagsman submitted at 3:25.

Jason Jones got Team Holland on the scoreboard with his unanimous decision victory over Dmitry Samoilov in the middleweight final. The explosive Jones, cornered by K-1 knockout artist Melvin Manhoef, dropped the first round to the well-versed Samoilov, who worked a kimura and some potent ground-and-pound on the trapped Dutchman.

Jones came alive in the second and outmuscled the Bodog Fight standout to the canvas, where he went for a rear-naked choke and then transitioned to an armbar attempt. Samoilov was deducted a point for kicking Jones’ head as he tried to wiggle his appendage free. After a brief rest, the fighters were re-started standing, and Jones began to get a feel for his shot range. 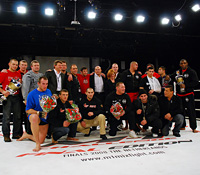 Chris van der Meijde
In the final round, Jones utilized two key takedowns to steal the bout from the frustrated Russian, who found his range in the stand-up just a little too late.

Erik Oganov’s violent takedowns were too much for Romano de los Reyes, who fell to the Red Devil welterweight via a unanimous decision. A second-round guillotine attempt from de los Reyes and a yellow card deduction given to the Russian for an illegal head butt in the bout’s first few seconds were not enough to slow down Oganov.

Red Devil lightweight Mikhail Malyutin landed a crushing right hook on Team Holland’s Bogdan Christea that set the stage for a split decision nod and a win for his team out of the gate. Malyutin enjoyed positional control for much of the first and second rounds and scored points in a defiant Christea’s guard.

A purple mouse forming under his left eye, Christea attempted to rally by taking the Russian’s back mid-round. He garnered top control in the second round’s final seconds and dropped back for a leg lock right at the bell.

Down two sets, the emotionally charged Christea took the reigns in round three and nearly ended things with a rear-naked choke. The fighters made it back to their feet, and Christea dropped to his back for one more failed guillotine attempt, but his efforts were not enough to secure a win for his squad.

In non-team bouts, light heavyweight Toni Valtonen dished out loads of punishment en route to a third-round stoppage over Chang Seob Lee. Pudgy but resilient, Lee absorbed head and body punches from almost every position, including full mount. The potbellied plodder landed a few haymakers of his own along the way and quickly became a crowd favorite but had endured enough by round three and verbally motioned for a reprieve.

Red Devil newcomer Radmir Gabdulin acquitted himself well in his fourth professional fight, surviving two heel hook attempts from middleweight Hoon Kim in the first round. He cinched in his own triangle choke finish 35 seconds into the second set.

Ricardo Wondel’s first takedown on Sang Soo Lee was as sudden as the heavyweight bout’s finish. After pounding on Lee in his guard for a minute or so, a wincing Wondel -- cornered by Dream middleweight grand prix champion Gegard Mousasi -- informed the referee that he had dislocated his thumb and would not be able to continue.

M-1 Global will begin M-1 Challenge’s second season on Feb. 21 in Seattle, expanding from 10 to 16 teams to include a Brazilian contingent, an additional U.S. squad and possibly a Chinese group.

Sherdog.com initially reported that Gibbs was undefeated entering his match when in fact he lost to Aleksander Emelianenko in 2007.