FRESNO, Calif. -- Casey “The Underdog” Olson will have to change his nickname soon. Olson needed only half of the first round to dispose of the overmatched Tony Boyles at Cage Combat Fighting Championships “Rumble in the Park II” at the Woodward Park Amphitheatre.

Dominant lightweight Olson immediately took the fight to the ground, patiently improving his position until he locked on the winning arm-triangle choke at 2:28 to boost his record to 8-2.

Jason Von Flue, another local favorite, was not so fortunate. Von Flue looked good early, connecting with a left-right combo that dropped his undefeated opponent, Kyle Pimental, to his knees. Von Flue followed him down and looked close to finishing Pimental off with a tight guillotine, but Pimental survived. It would be the last time Von Flue looked in control.

The beginning of the end seemed to come from a standing elbow Pimental landed while the fighters were separating. The blow obviously rocked Von Flue, and he did not seem fully recovered as Pimental pounded away in Von Flue’s half guard to finish the round.

Pimental began round two by landing a solid body kick that had Von Flue stumbling backwards towards the fence. He then rushed in and landed a devastating liver kick that doubled Von Flue over for the finish at 29 seconds. Pimental improved his record to a perfect 6-0. 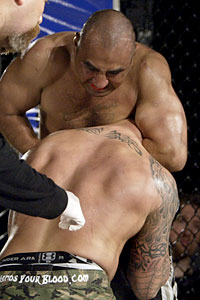 Metcalf came out aggressive, landing a right, then took the fight to the ground where he locked in a fight-ending rear-naked choke at just 1:16 of round one.

The bantamweight title, recently vacated by Rolando Velasco, was also up for grabs. David Espinosa, who already fought the former champ to a draw in August, faced off against Anthony Figueroa.

Figueroa (4-4) had nothing for Espinoza and was steamrolled in a swift 1:07. Espinoza (6-2-1) came out strong, got the takedown, took his back, and locked in the rear-naked choke.

Preliminary action stole the show with the fight of the night going to Eli Moreno and Ted Von Roll after three grueling rounds of back-and-forth action. Von Roll took the first two sets, but a winded Moreno locked in a standing guillotine to force the tapout 44 seconds into round three.

Telly Sanders put on a takedown clinic against Lira Moses. Sanders dumped Moses on his backside throughout the fight, but by the third round, looked to have nothing left. However, Sanders dug deep, got the takedown and pounded on Moses until the ref jumped in and stopped the fight at 2:22 of the final stanza.

Also on the undercard, Eric Castle scored a technical submission victory over the always-tough Mike Craddock. The ref stopped the fight at 2:27 due to on armbar, but Craddock, who never tapped, insisted that his arm was already almost out, and that he was in no danger at all. A rematch is more than likely in the near future.