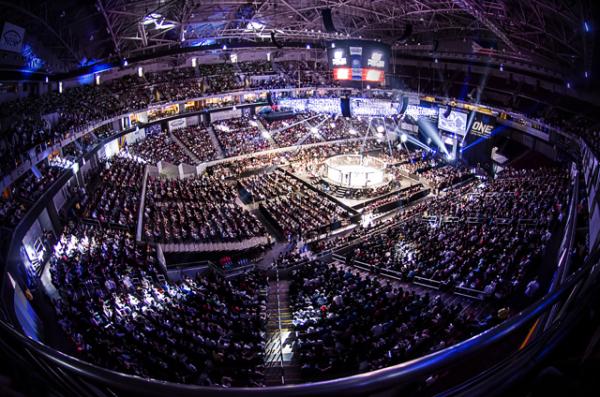 One Fighting Championship CEO Victor Cui is a man with a plan. | Photo Courtesy: One FC


Many refer to rapidly growing Asian mixed martial arts promotion One Fighting Championship as “the rebirth of Pride.”

As a freelance reporter for Sherdog.com, I have covered events and interviewed fighters, coaches and promoters from around the world. Lately, however, I have become increasingly interested in the explosive growth of Asia’s largest MMA promotion: One FC. Reading about the how the organization was founded and how it functions, talking to its staff and fighters and watching its events on Internet pay-per-view has led me to believe this is an entity that has only just begun its rise. Finally, a few months ago, I decided it was time for me to attend an event in person.

I had originally planned to catch One FC’s next show in Singapore in November. However, when One FC announced its biggest card to date, with three title fights, for its debut in the United Arab Emirates, my plans changed. The event was sooner, closer and cheaper, so I bought my ticket to Dubai to watch One FC 19 “Reign of Champions” on Aug. 29 at the Dubai World Trade Centre.

I saw fireworks -- literally. The beginning of the locally televised, Internet-broadcast PPV event began with the entire main card lining up, one-by-one, and facing off against respective opponents in front of two-story-tall synchronized screens; and the final complete lineup was saluted by a round of indoor fireworks, to the delight of the sold-out Dubai crowd. Another unique practice of this organization is the focus and spotlight, with each fighter on the card, from the first prelim to the main event, receiving his or her share of attention. Everyone on the card is treated as a superstar, right up to and including the dramatic introduction of each fighter to the cage by legendary Dream, Glory and Pride ring announcer Lenne Hardt.

As for the actual fights, only three of the nine went to a decision -- a fact no doubt assisted by the Global MMA Rule Set utilized by One FC. These guidelines combine old Pride rules with those adhered to in Nevada, and unlike those present in the UFC, they allow soccer kicks, as well as knee strikes to the head of grounded opponents. Additionally, scoring is not done on a round-by-round basis but on the bout in its entirety, using One FC’s judging standards, which include near knockout or submission, earned takedowns or takedown defense, striking combinations and cage control, ground control, superior position, aggression and damage. On a side note, every fighter with whom I have discussed these rules and scoring guidelines prefer them to those that are widely utilized in modern MMA.

What is it about the organization that is so fascinating? For one, each of its cards is packed with fighters from around the globe -- and intentionally so. One Fighting Championship CEO Victor Cui explained it simply as the search for the next Bruce Lee. When One FC held an MMA summit in 2013, it was attended by more than 500 of the who’s who in Asian MMA, including Lee’s brother and sister. Cui pointed to Asia as birthplace of MMA, and most Asian countries have at their core and as an integral part of their culture some form of martial arts. One FC works to show how each of these native martial arts remain relevant and valuable in the world of MMA.

“We are focused on developing national champions in each country we visit [and] showing the world some of the best fighters in their own countries,” Cui said.

Case in point: each of the reigning champions in One FC hails from a different country, from Ben Askren (United States) and Shinya Aoki (Japan) to Jadamba Narantungalag (Mongolia) and Bibiano Fernandes (Brazil).

Need more reason to pay attention to One FC? There are plenty. In just three years, it has already staged shows in Singapore, Malaysia, Indonesia, Taiwan, Philippines and United Arab Emirates. On Friday, One FC visits Cambodia, where it will crown its inaugural flyweight champion. One FC also plans to promote several events in mainland China over the next year -- a feat the UFC has yet to accomplish. Cui’s relationships within the Chinese government, obtained during his eight years as a senior executive for ESPN Star Sports, have given him the means and strategy to succeed where others have not.

From the time I arrived at my hotel in Dubai until I boarded the plane to go home, I was treated with courtesy and respect. One FC follows an aggressive marketing strategy, courting the fighters, gyms, businesses, media and governments of each country as part of what has been a successful growth plan. The entire organization, from staff to sponsors, fighters to coaches, management to outsourced help, appears to pursue close, familial relationships. One FC has a formula for success, and so far, it is working.