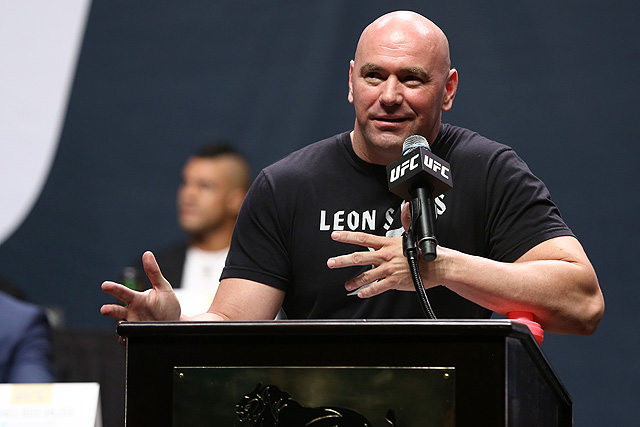 Editor's note: The views & opinions expressed below are those of the author and do not necessarily reflect the views of Sherdog.com, its affiliates and sponsors or its parent company, Evolve Media.

The yin and yang of an Ultimate Fighting Championship led by Dana White were on full display at UFC 192, and it all had to do with decisions following the fallout of Saturday’s event.

As we all know, White is an emotional person who is truly a fan of the sport. So when things happen to the product he loves, there is oftentimes a kneejerk reaction. Case in point, the UFC 192 co-main event between Johny Hendricks and Tyron Woodley that was scrapped thanks to the former Oklahoma State University wrestler’s well-documented weight-cutting issues.

There were two major takeaways from his subsequent decisions that epitomize White’s tenure and the reason why so many are enamored with him, while others love to hate him. To be more specific, it’s the reason why fans love that he often caters to their desires and fighters loathe how unreliable the sport’s landscape can play out.

Just spoke with @danawhite and he said @TWooodley will get the title shot next, fighting Lawler-Condit winner. My post will be live soon.

White reportedly told Yahoo’s Kevin Iole that Woodley would get the next crack at the UFC welterweight title as a result of UFC 192’s drama. While it sounds good in theory, we all know that you simply can’t trust promoters to not change their mind between now and whenever that title shot is supposed to come.

Without a signed contract, Woodley will be at the mercy of watching other fights play out and hope that the offer still stands when it’s his turn. There are simply too many factors that will play into whether Woodley gets his title shot. If Carlos Condit were to narrowly beat Robbie Lawler, you can almost bet your bottom dollar that a rematch will be confirmed. The same goes for if the opposite happens. Who’s to say that there won’t be some injury along the way that will derail all plans?

And you always have Matt Brown lurking right around the corner. What happens if he wins in dominant fashion against Kevin Gastelum? It’s totally plausible that White thrusts him into a rematch with Lawler (which was exciting in its own right the first time around) and leapfrogging Woodley. By the time Woodley is supposed to get his title shot, it’s not outside the realm of reality that Rory MacDonald will be ready to go. And considering that MacDonald handed Woodley his last defeat, why wouldn’t he get a rematch against either Lawler or Condit before Woodley gets his shot?

You see? So many factors that make this supposed title shot far from a sure thing for Woodley. That’s how title shots go. Don’t believe me? Ask Miesha Tate.

And then there’s Hendricks, who was exiled from the division after missing weight. Well, chances are that the UFC will have a change of heart sooner than later. Even though Hendricks’ battles with making weight have been well documented, this is the first time he has ever had to pull out of a fight on the eve of battle and has never officially missed weight (he initially came in heavy at UFC 171, but made the limit within the allotted hour) . Add that to the fact that White is a human being who often changes his mind and it’s unlikely that we’ll see Hendricks migrate upward to the middleweight division … yet.

Obviously, to see a highly anticipated co-feature bout nixed at the last minute doesn’t bode well for the former champion. But he is the former champion who is only one fight removed from losing the title last December. Not to mention that he was pretty dominant in his last fight against Brown. It’s clear that White made his decision in the heat of the moment.

White’s going to listen to Hendricks plead his case and whatever the fans say before he decides whether or not to follow through on his plans for the former champ to compete at middleweight. But the smart money is that he’ll give “Big Rigg” another chance at welterweight before seriously considering shoving him up the weight ladder.

Ultimately, rankings don’t mean a whole lot in the grand scheme of things and if there is a fight that appeals more to the fans, the UFC won’t hesitate to pull the trigger, regardless of rank. White often says at press conferences to not ask him what’s next because he knows, just like everyone else, that his mind can and will change.

That’s the beauty and the beast of the UFC. It gives the fans what they want but oftentimes at the detriment of those that it makes promises to.

Andreas Hale is a content producer for Jay Z’s LifeandTimes.com and editor-in-chief of PremierWuzHere.com, as well as a frequent Sherdog.com columnist. Check out his archive here.