There are two things fans can take away from the Clay Guida-Anthony Pettis bout at “The Ultimate Fighter 13” Finale on Saturday at the Palms Casino Resort in Las Vegas. One, it was a good fight between two talented contenders. And two, anyone familiar with their styles surely wondered what might have transpired if their match had been slated for five rounds instead of three.

Guida went five rounds twice in Strikeforce, outpointing Josh Thomson and losing a decision to Gilbert Melendez. Meanwhile, Pettis’ five-round war with Benson Henderson, in which he won the WEC lightweight title, was an instant classic in December.

Like old-school pitchers that get better down the stretch, Guida and Pettis are wired to throw their best stuff over nine innings; the decision awarded to Guida was unequivocally his, but with the lightweight division the deepest in the organization’s swelling roster, five-round fights would be a great way to truly differentiate between fighters at the highest level.

UFC President Dana White has ventured that five-round elimination fights are a possibility, but with that stipulation comes a host of expectations and reasonably plausible consequences. First, to make five-round non-title fights, you would need to set a clearly defined standard for what could qualify. To do so arbitrarily would be haphazard and dilute the brand, and you would also run the risk of increasing the length of boring bouts by 40 percent. 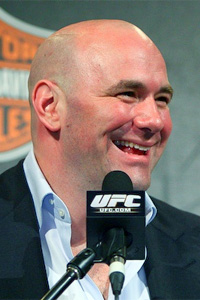 Dana White File Photo
White has stated that five-round
elimination fights are a possibility.
In the lightweight division, among the current crop of top contenders -- Guida, Henderson and Jim Miller -- there is a great return on investment in them squaring off over the five-round distance. Perhaps a stipulation could be put in place designating fights between Top 10 contenders as five-round affairs, with the winner put on the short track to a title shot -- at most one more win away. Is there any doubt that the Miller-Henderson bout at UFC Live 5 on Aug. 14 in Milwaukee would be eminently more conclusive if it were scheduled for five rounds?

Building and creating fight cards with a busy schedule and huge roster is no small feat, particularly with the spate of injuries, withdrawals and variables that ensue as the weeks and months go by. Still, the gold mine that is the lightweight division makes five-round elimination fights a virtual no-brainer.

It is a wrinkle to the existing formula that should be applied judiciously. It would enrich the viewing experience and let the better man prove himself over the championship distance.

With Frankie Edgar and Gray Maynard ranked as 1 and 1A, they sit atop a packed lightweight division in the UFC. Anyone getting a title shot will have to negotiate a tough road of bouts against talented fighters. Miller will meet Henderson in the next showdown of top contenders, and Guida cracked the Top 5 with his win over Pettis.

Guida’s ascent has not been easy. With a record of 9-5 in the UFC, his career was often defined by being entertaining and ever-watchable, often in defeat, often by narrow margins. From a technical perspective, he is not quite the wrestler or striker that Edgar and Maynard have shown themselves to be. And he will never be a flashy, highlight-reel-type like Pettis or Melvin Guillard, whom I think is the most physically gifted fighter in the division.

With that said, Guida’s conditioning and constant fine-tuning of his game allows him to bring his fast pace and constant pressure to bear, blunting opponents and bending them to his will. The win over Pettis was defined by numerous escapes from seemingly bad spots, as he stymied submission attempts and picked his spots.

Guida is just one of those guys that is always going to extract a price and get a piece of you somehow; he would not be a betting favorite over whomever emerges with the title from Edgar-Maynard III, but who would not want to see it?

Jason Probst can be reached at [email protected] or at www.twitter.com/jasonprobst.