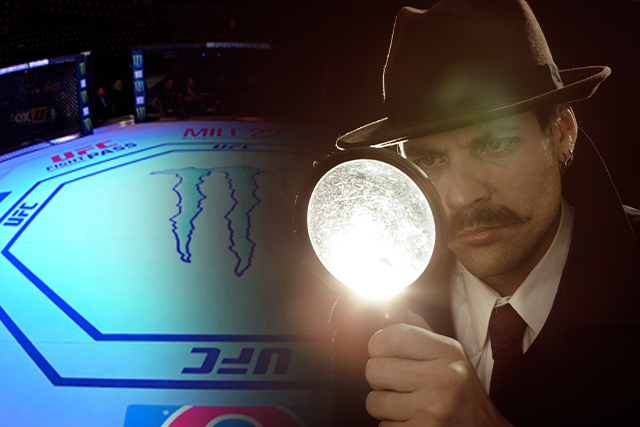 When one thinks of MMA mysteries, they usually deal with the past. For many years, fans debated whether Charles Bennett knocked out Wanderlei Silva backstage before Pride Final Conflict 2005, contributing to the Brazilian legend's loss to Ricardo Arona. The question was only put to rest last year, when Silva himself confirmed it in a memoir.

But what if I were to tell you that there is a very intriguing MMA mystery going on right now, while I type these words? And that not only is it unsolved, but I have yet to see anyone else even mention it? Solving a mystery is difficult enough, but this is a case where almost no one realizes anything strange is going on.

What I'm talking about are some very curious inclusions on the main cards of Ultimate Fighting Championship events, up to and including the co-main event. I first became aware of this watching UFC on ESPN 16, headlined by Holly Holm and Irene Aldana, whose co-main was Carlos Felipe facing Yorgan De Castro. At the time, Felipe was 0-1 in the UFC and had just been soundly beaten by Sergey Spivak in the very first fight of UFC Fight Night 172, two and a half months before. Yet, after losing on the lowest billed match, he was “promoted” all the way to the co-main in his next appearance. Moreover, de Castro was no great shakes himself, being 1-1 in the UFC and having just lost a lackluster affair to Greg Hardy.

So why in the world were those two in the co-main in front of much better matches featuring more highly regarded, more famous opponents, such as Carlos Condit – Court McGee, Germaine de Randamie – Julianna Pena, or even Casey Kenney – Heili Alateng?

Nor was this an isolated incident. Why on UFC 254 was a match between two UFC newcomers, 8-2 Spencer Hawes and 4-0 Jacob Malkoun, on the main card, ahead of an earlier main card battle like the rematch between light heavyweight contenders Magomed Ankalaev and Ion Cutelaba, or exciting prelim encounters like Kenney – Nathaniel Wood, or even undefeated former M-1 Global champion Shavkat Rakhmonov facing entertaining veteran Alex Oliveira?

Why, for UFC on ESPN 21, was a fight between two UFC newcomers, Montserrat Ruiz and Cheyanne Buys, on the main card, ahead of a tremendous battle like Grant Dawson – Leonardo Santos? Santos had been undefeated for over seven years, including a perfect 7-0-1 record in the UFC, and was facing a hot prospect in Dawson, with a sterling 16-1 record and 4-0 in the organization.

Most recently, this past weekend, a few eyebrows were raised at Marcos Rogerio de Lima facing Maurice Greene on the main card, ahead of that very same Hawes, now 10-2 and far more proven, versus Kyle Daukaus on the prelims, or Michael Trizano – Ludovit Klein. Greene, it should be noted, had lost three of his last four, all by finish, while de Lima had himself gone 1-2 in his last three, and not against tough opposition.

What is the reason for these strange inclusions, which we see about one of every two or three cards? One ready answer might be that these are heavyweights, but that's not always the case, as Hawes-Malkoun above was at middleweight and Ruiz-Buys was at strawweight. Another might be that the matchmakers expected fireworks in these bouts, despite the lack of name value. However, that's a difficult argument to make for Felipe-de Castro, both of whom had uninspired, tepid performances in their respective last fights prior to that one. And why then do fights that guarantee tremendous action, like Kenney-Wood, get passed over?

I have my own theory, although like any good mystery, I can't say for certain it's correct. I believe there are two related reasons for such odd placements.

First, the UFC was initially curious whether there was any drop-off in viewership, or anyone would point out how out of place such fights are in terms of quality. I believe, based on the continued appearance of such matches, they have answered both questions in the negative.

And once they discovered this, the second reason was to send a clear message to the fighters that even a highly skilled veteran, a dynamite young prospect, ranked contender, or even a former title challenger, can easily be replaced by newcomers or fighters on losing streaks that are paid far less. And what's more, no one will bemoan this or stop watching! Thus, stay in line and don't get too cocky or demanding.

The second reason is utterly ruthless, but likely very effective. While I haven't seen public discussions of these main card oddities, I wouldn't at all be surprised if the fighters themselves notice it, since this is literally their livelihood on the line. Moreover, while we have seen plenty of top stars and champions recently challenge the UFC to pay them what they're worth, with Jon Jones, Henry Cejudo, and Jorge Masvidal all coming to mind, we rarely see it from anyone less popular. And this could well be why.

But what do you think, dear reader, of this modern MMA mystery? Do you have a solution of your own?
« Previous Gregor Gillespie: UFC on ESPN 24 Win ‘Took Most Character and Heart’ of MMA Career Next Michelle Waterson Releases Statement After UFC on ESPN 24: ‘I’ll Be Back’ »