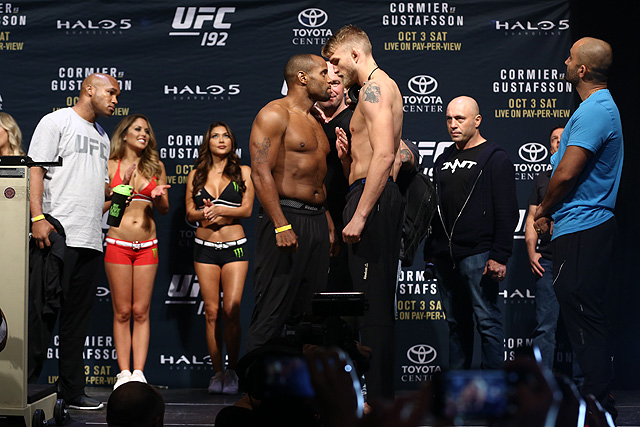 
Something about combat sports brings out the jingoism in all of us. It’s a weird, vicarious validation to see a countryman beat the best of the best of another country. The Ultimate Fighting Championship routinely plays up this angle: Look no further for evidence than this season of “The Ultimate Fighter.” It’s a natural promotional approach given the degree of international presence in the sport, and it seems to be a renewable source of excitement upon which to fall back.

Though much of the promotion for the light heavyweight title fight at UFC 192 on Saturday essentially boiled down to “tall punchy guy vs. short wrestler guy,” the subtext of that matchup was nationalistic. Daniel Cormier is the quintessential American story, one of success born of defiant determination and stubborn grit. Through numerous struggles and detours, Cormier never gave up, “never had his eyes on the door” and forged a path of his own to become the (technically) undisputed champion of the world. Throw in the rags-to-riches undercurrent, and he’s a regular depiction of the American Dream. That he’s a wrestler who relies on tenacious physicality is fitting, especially when contrasted with his European foe.

Alexander Gustafsson was the antithesis of “DC.” Long and rangy, the Swede wins by technical precision and finesse, by keeping a safe distance no matter what -- even if it means turning his back on his opponent and running away. His actual fighting style undermines his nickname; “The Sniper” would probably describe him more accurately.


As opposed to Cormier’s trial-by-fire belief in himself, Gustafsson’s confidence was perceived as smug and snooty, like he was buying into his own unwarranted hype. After all, he had just been walloped by Anthony Johnson in his hometown, and his biggest accomplishment was losing to Jon Jones, noteworthy only because it defied the expectations of a blowout. In the same way that the conception of the American Spirit was forged by frontier bravery and rugged wilderness, the stereotypical aura of Sweden is one of peaceful balance and passive neutrality. Cormier and Gustafsson were the pugilistic embodiment of these national identities, it seemed.

Gustafsson’s career has thus far placed him on the border of “very good” and “great,” but both of his opportunities to definitively cross that line have come up painstakingly short. He’s routinely blown it on the biggest stages. The amalgam of Gustafsson’s criticisms paints a picture of someone who is a sportsman, not a “real fighter,” which apparently exists distinctly separate from the majority of the UFC roster. Real fighters roll up their sleeves and get their hands dirty. Either that or they win championships. Gustafsson doesn’t win titles because he’s not a real fighter, and he’s not a real fighter because he hasn’t won a championship.

That’s ultimately why he wouldn’t beat the bellicose beast of Cormier, pundits opined before the fight. The grinder would outduel the point-scorer. If you only look at the result of the fight, then that narrative rings true. It doesn’t bode well for Gustafsson, then, since his entire fighting style and subsequent success has been a direct result of not getting his hands too dirty. Perhaps it’s time for him to reinvent himself?

A comparative analysis with another European who pursued athletic glory in Texas, however, provides meaningful insight to Gustafsson’s be-yourself-or-be-a-champion predicament.

Dirk Nowitzki of the Dallas Mavericks, like Gustafsson, was seen as too soft to compete with his American counterparts. Too much finesse, not enough ferocity. No one could argue that he was an offensive wunderkind, but naysayers would point to his bread and butter -- a mid- to long-range game that was unprecedented for post players and still unmatched today -- as proof that he lacked the rugged physicality necessary to win a title. While other frontcourt 7-footers like Shaquille O’Neal, Tim Duncan and Kevin Garnett were swapping titles by putting their backs to the basket and dunking through defenders, Nowitzki mastered a step-back fade with a high arc and a soft touch.

Nowitzki’s first attempt to right the ship was in 2006. After leading the Mavericks to the NBA Finals for the first time in franchise history, they squandered a 2-0 series lead and lost the title-clinching Game 6 in front of their home crowd. The following year, after Nowitzki won the regular-season MVP and the Mavs posted the best record in the league, they were ousted by heavy underdogs in the first round. That offseason, Nowitzki flirted with retirement.

The parallels with Gustafsson’s career volatility of late are not hard to spot: close title loss followed by non-championship success and then a devastating upset that spurned retirement consideration.

Of course, Nowitzki had his moment in the sun when he won a title in 2011, and his development from Euro-soft to win-at-all-costs-warrior was widely praised. For Gustafsson, had one judge scored one round differently at UFC 192, his career homage to Nowitzki would have been eerily complete. However, all is not lost for the Swedish sensation.

The irony of Nowitzki’s championship “transformation” was that he didn’t change his game -- at all. It took a few failures, but he stayed true to the talents that worked for him all along, improving upon them incrementally instead of changing them comprehensively.

At 28 years old, Gustafsson still has a great deal of upside, and the same narrative arc could very well prove true for him, too. There are mounting murmurs of what he needs to change, but the game he has now has been good enough to arguably win the title twice. He’s not the best fighter he is capable of being just yet, but his loss-by-a-hair performance against Cormier proves he is generally on the right path. He needs to trust what he has done; it has gotten him this far.

If I could fast-forward the next 10 years of MMA, I wouldn’t be surprised to see Gustafsson introduced as a former champion. Then again, I wouldn’t be all that surprised to see him on a “Top 10 Fighters Who Never Won a Title” list, either, especially with the cumulonimbus shadow of all-time talent Jones descending on the 205-pound division sooner than later. Still, as rehearsed pre-fight interview etiquette dictates, Gustafsson should be focused on himself, not his opponents. After all, Nowitzki won his title against LeBron James.

Moral victories only really exist with fans and pundits. I doubt Gustafsson feels much solace in almost winning the title twice. If anything, the closeness of the fights likely compounds the disappointment and second-guessing. Even so, Gustafsson has plenty reason to be optimistic about his future in the sport.