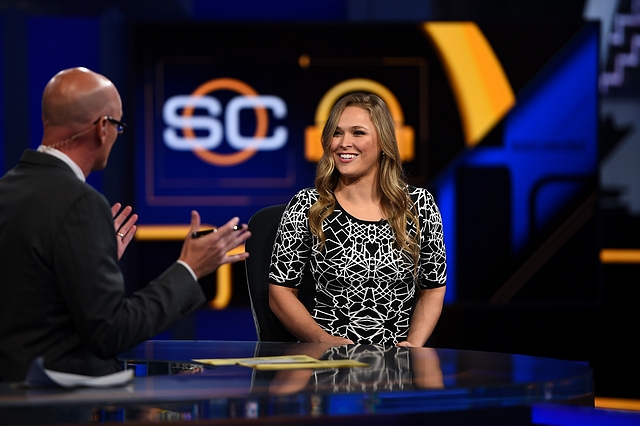 While news broke last week of Ronda Rousey’s several celebrity controversies, I was going home from work in one of the busiest parts of Seoul. Advertisements for UFC Fight Night “Henderson vs. Alves” flapped from streetlight poles, some of them generic red Ultimate Fighting Championship banners, others with pictures of fighters on them. My coworker noticed me inspecting them and asked what they were about. The best explanation I could offer was “punch-kick-wrestle fighting with rules.” Her immediate reaction was to ask, “Why do you like that?”

I tried to vocalize that it was exciting, that mixed martial arts is probably the most consistently dynamic and unpredictable sport in existence, that the energy of a live UFC event is a truly unique experience in the world of professional athletics. She wasn’t convinced, instead honing in on the fact that people pay a good chunk of money to watch people beat up each other. I assured her that it wasn’t like that. I’m a normal, nonviolent person. I enjoy it like a baseball fan enjoys baseball. She shrugged in the same way you might if a coworker started to excitedly tell you about the home-brewed beer he has been making, assuring you that even though he loves beer, he’s not an alcoholic.

If you’re reading this, you probably agree with me that my coworker is the one who doesn’t get it, but we might not be right. That conversation reminded me that you and I, dear reader, are still part of a sport that involves a good degree of moral scrutiny -- from a lot more people than we might be aware of. That there is at least some degree of earnest political opposition to its existence surely is a reflection of a larger, less vocal group of people who passively disapprove of it in the way that a grandmother does gangsta rap; she may not want it made illegal, per se, but she definitely wants no part of it.

As spectators, we can compartmentalize the violence we eagerly consume and keep it separate from the rest of our lives without any ill effects. That’s why Arizona Sen. John McCain’s 1990s crusade against “human cockfighting” is so infamously hilarious; it’s hyperbolic prudishness to see the entire sport unfit for existence, let alone TV, especially when you can watch a weekly murder/orgy on “American Horror Story” without so much as a blip on anyone’s political radar. The more habitually you watch an MMA event, the more uncontroversial it becomes.

As fans of the sport, we’ve laughed in the face of what we perceive as irrational judgment, and yet there was a significant moral outcry at the news that Rousey is dating Travis Browne -- an alleged domestic abuser. “How could she?” the masses curiously cried, demanding better of someone who fights for us to watch, “after dissing Floyd Mayweather about the same thing?” Accusations of hypocrisy were hurled at Rousey, as if “hypocrite” weren’t a synonym for “human.”

The tweets, comments, podcast discussions -- you name it -- were impossible to avoid if you consume even the least bit of MMA media. No other story has been as widely read on Bleacher Report MMA. Ever.

A big portion of that interest revolved around the domestic abuse allegation surrounding Browne, which he has vehemently denied. After being briefly suspended by the UFC, the matter underwent an investigation that concluded in his favor. Of course, that may not be the whole story; the accuser posted pictures of bruises on social media, and “settled” does not mean the same as “innocent.” Alas, we don’t know. That’s exactly the point, though, and why it struck me as odd as it did when the pitchforks were brought out for Rousey when her relationship with Browne was made TMZ official. Reactions to convicted abusers never evoked such en masse uproar.

I’m by no means defending domestic abuse, which is disgusting and horrible in every way possible, but I’m not in any kind of position to know what actually happened, so I don’t feel comfortable casting judgment. The official word is that Browne is in the clear. Who am I to question that? There is no shortage of people better positioned than I to ascertain the truth, and I hope they do; or that they already have, as I prefer to live in a world where this sort of thing happens less.

Yet, the most peculiar part of it all is the idea, embedded in the moralized murmurs, that this is something that hasn’t come up between Rousey and Browne. Rousey is a grown woman, and I’m confident that the topic has been addressed in the relationship, at least to an extent to which they currently feel comfortable. Her situation is her own, and it’s not like the contradiction of cozying up with an alleged domestic abuser escaped her. If she is in fact making a relationship mistake, it looks like she’s part of the human race after all. Personally, I don’t think it deserves any more breathing room than whatever other celebrity gossip goes on without my knowing or caring.

Because we can section off our mental thirst for violence and still maintain normal lives, we assume the fighters themselves can, too. We see everything from what is essentially a voyeur’s purview, avoiding the messiness of real life as we sound off from a safe, sanitized distance. Make no mistake, righteous outrage is the easiest, laziest response there is. It spares us from the painful helplessness of empathy and the blisters of understanding.

This does not even mention that while the rabble groaned on, a fantastic boxing card and another solid outing from perpetual underdog World Series of Fighting went by, with “real” fans and pundits bemoaning the state of Rousey’s celebrity gossip. Apparently they’re not aware that in doing so, they are her gossip, at least partly.

I understand that the world we live in is one where celebrity gossip and other fluffy, hollow “news” stories will appeal to a certain type of person. That’s fine, but mixed martial arts, in my experience, has always been a refreshing reprieve from that world. Now with Rousey crossing over in every sense of the word, it appears the collective response has been to become the same schoolmarms we rolled our eyes at not too long ago. We can do better.