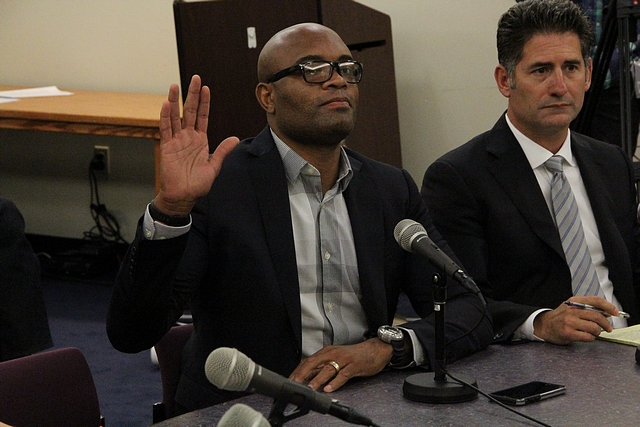 Anderson Silva did his legacy no favors before the Nevada Athletic Commission. | Photo: Mike Sloan/Sherdog.com


It makes me feel like a fool, but I’ll be honest: I really, truly expected to write this column about the Ultimate Fighting Championship lightweight title rematch between Rafael dos Anjos and Donald Cerrone. I really, really did.

When word got out on Tuesday that Anderson Silva’s defense to his post-UFC 183 positive steroid test was going to be a contaminated sexual-performance supplement, I thought that was going to be as good as it got -- as if I had never seen a Nevada Athletic Commission hearing before, as if I didn’t know what kind of sport mixed martial arts truly is.

Instead, the NAC hearing on Thursday served as a reminder that somehow, some way, a government office streaming its tribunals online is the best part of UFC’s Fight Pass platform. As loquacious as I might be, I struggle to find just a few punchy adjectives to sum up the entirety of this farce. To describe it in detail without seeing it just cheapens the event; your mind struggles to process so many individual pieces of its intellect-insulting insanity that they overlap and overload your brain. Ryo Chonan might have put him on a highlight reel for the ages and Chris Weidman might have knocked his block off and broken his leg, but no one has put Silva on blast like this.


The emphasis is on “no one,” as it wasn’t a solitary effort. Not only were the chairpersons of the Nevada Athletic Commission ready to pounce on and skewer Silva’s ridiculous story, but we were also treated to Silva doing his best to hurt his own cause, translator drama and even an enterprising person using the NAC conference call line as their personal DJ booth.

Silva is arguably the greatest MMA fighter to ever grace the cage -- or ring, you pedants. Rather than showing any penchant for preparedness that he might have developed over his 18-year MMA career, “The Spider” showed up with the ole “I took some mysterious clear sex liquid out of a blue vial from Thailand that I got from a training partner” excuse. He doubled down with his “expert” witness Paul Scott, who got the ass kicking of a lifetime from the commission after not showing up with anything resembling evidence, essentially offering testimony of, “Yeah, it was contaminated bootleg Cialis, but I forgot to bring the proof.”

An irate-looking Ed Soares took over for the NAC-appointed translator partway through proceedings, unsatisfied with translations for his client. It was only at this point that the “clear liquid in a blue vial” story came out, leading the original translator to claim that Silva had changed his testimony. Partway through the hearing, Soares was replaced again. What?

And then there was the speakerphone. “Let's Talk About Sex” by Salt-N-Pepa, “Bump N’ Grind” by R. Kelly and all the sexy jams you could shake a sexy stick at made it onto the audio of an official government meeting pertaining to the immediate future of a legendary combat sports athlete. By the time the third or fourth Twitter request made it to the NAC airwaves, it wasn’t even funny so much as it had become the interstitial musical motifs of an absurd MMA sitcom.

Did I mention that this hearing was postponed three times? Silva was granted a trio of continuances. He had an extra four months to work on an excuse, and this is what we came up with: “Yeah, I go to the doctor for my anxiety medication and when my sciatica acts up, but if I have some issues with my penis, I get some clear liquid from Thailand courtesy of a guy I’ve trained with for a year or so.”

At one point, for no fathomable reason, Silva petulantly rubbed his chin stubble against his microphone. It was like a Tim Heidecker and Eric Wareheim audio gag.

Still, what is a comedy or a drama -- and to be sure, this was both -- without a climax? The hearing concluded in a fashion as farcical as the rest. Ultimately, Silva was fined his show money and 30 percent of win bonus, adding up to a paltry $380,000 (given Silva’s legitimate worth) and suspended for one year retroactive to Jan. 31, when he fought Nick Diaz at UFC 183. He could have showed up in March, simply said, “Hey, sorry everybody, I goofed,” and gotten nine months plus a much smaller fine. Instead, he spent a day immortally humiliating himself over the course of a deceitful, malarial dream to receive essentially the “maximum” Nevada penalty, which still amounts to nothing. At least he wasn’t an hour’s drive immediately west, in California, where Andy Foster would have slapped him with two years off the top.

For his cheating, lying, tarring and feathering himself in public, Silva will be eligible to take to the Octagon for Super Bowl weekend -- this after every Nevada commissioner all but called Silva a liar for over two hours. Even more perverse, the shambolic theatrics of Silva’s pathetic “defense” -- nowhere befitting one of the best defensive fighters in MMA history -- are so extreme, so over the top, that they serve to distract from the actual conversation and perhaps even lessen its impact.

I’m not saying people have entirely forgotten that Silva is a PED cheat, but rather that when any famous person’s actions -- let alone a legendary and legendarily aloof fighter like Silva -- veer into the category of “bats--- insane,” assessing them rationally can become hard. Probably the greatest example of this, fighter or not, is heavyweight boxing great Mike Tyson, a profoundly disturbed individual whose brutally antisocial past has been forgiven due to a bizarre mix of contrition, lispiness and eccentricity, albeit not in the combination for which you’d hope. So profound is that forgiveness that his cartoon avatar can cavort around with pigeons. It’s hard to reconcile that the same guy that stumped you all on the Nintendo Entertainment System during summer vacation in 1988 is the same guy that got coked up and punched Robin Givens and is the same guy who told Lennox Lewis he would cannibalize his children. The more calamitous and compounded the craziness, the more it distracts from the essential damage being done.

MMA doesn’t have to look far for its own chilling example. In fact, you don’t need to look much further than Silva, more specifically a man whose hype “The Spider” helped put to bed: Lee Murray. Murray was a terrifying human being before masterminding the $85 million robbery of a Securitas Depot in February 2006, but his heist, the chase for him as a fugitive, his eventual capture in a palatial Moroccan estate, his escape from prison and re-capture all served to turn him into a criminal folk god, not just a UFC veteran who happened to enjoy a knife fight in a nightclub.

Sports Illustrated ran a massive takeout feature on him, which, while not explicitly glorifying him, inspired Time Inc. to begin developing a movie about the Securitas heist and Murray’s life, proving that surely no good deed goes unpunished. Murray is still responsible for a man, his wife, his young son and 14 Securitas employees being held hostage under threat of death via automatic firepower, but he is often spoken of lovingly, like a Guy Ritchie character, not a sociopathic international felon.

Silva’s misdeeds don’t run nearly as deep, but his headache-inducing shenanigans following his positive PED test already seem to have overshadowed the act itself. Even the Nevada commissioners seemed more thrilled by their own wit, the situation’s absurdity and their desires to play bad cop against Silva’s outlandish claims than the punishment him they levied against his wrongdoing.

Silva may fight again and he may not, but regardless, the once-esteemed pound-for-pound king will end his career in some state of disgrace; it’s tough to say what shape it will exactly take. After all, the reality is that Silva’s current predicament only resonates within the MMA bubble. What, you think he’s Ronda Rousey or something? However, Silva’s defense was so memorably irrational, for reasons both within and beyond his control, that it has already become a touchstone for a meme-hungry MMA crowd that can’t resist a train wreck.

“Clear liquid, blue vial” gags will make me smile for some time, I’m sure, but every laugh is a small victory for “The Spider’s” unintentional subterfuge. His cockamamie defense is like an atomic mushroom cloud, billowing toxic, neon lunacy into the sky, its explosive reverberations somehow ringing out in the unmistakeable sounds of Salt-N-Pepa. It is unfathomable, it is disgusting and it is worth mockery, all while it distracts from its own wreckage below.