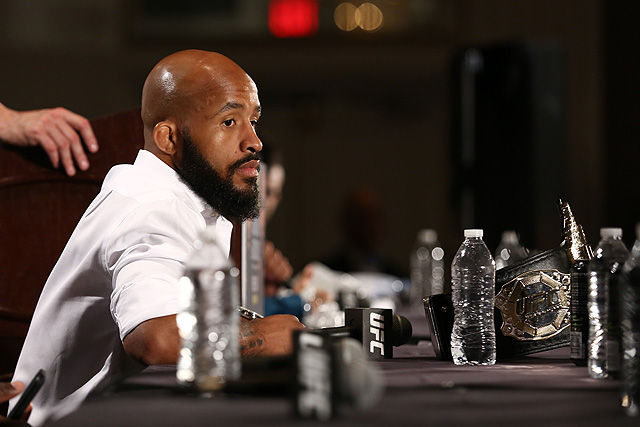 Demetrious Johnson has flopped at the box office, despite his obvious talents. | Photo: Dave Mandel/Sherdog.com


Viewers at UFC 192 on Saturday were treated to what has unfortunately become a familiar scene. Two elite flyweight fighters entered the cage for an important bout in the division at the Toyota Center in Houston. In one corner was Ali Bagautinov, the dangerous sambo champion who fought for the title in his most recent bout. In the other was Joseph Benavidez, one of the best pound-for-pound fighters in the world and a man who now holds a 23-0 record against opponents not named Demetrious Johnson or Dominick Cruz. The fight was one of the most interesting on paper in the division this year; and fans reacted with silence. The library-like conditions were interrupted only by sporadic boos, as the division that nobody asked for delivered another fight that nobody appeared to want to see.

At the end of 15 minutes featuring a lot of speed and movement, the attributes the Ultimate Fighting Championship has attempted to emphasize to sell the division, we went to the judges’ scorecards. That has become another flyweight specialty. In the last 14 flyweight fights, there have been 11 three-round decisions, one five-round decision, one third-round technical knockout and one first-round TKO. That’s two finishes in the last three hours, 24 minutes and 34 seconds of 125-pound competition. Not surprisingly, this is not creating a bevy of new superstar attractions.

It isn’t making a lot of money, either. Flyweights have headlined on pay-per-view four times now and only once cracked the nominal 200,000-buy barrier. The one time they did surpass that figure -- barely -- it was with the help of Conor McGregor and the UFC debut of Eddie Alvarez opposite Donald Cerrone. The implementation of flyweight title pay-per-views has coincided with the floor falling out for low-end UFC PPVs, in general.

Things are even worse from a live gate standpoint, where the flyweight division appears to have an overt and strong negative stigma. Montreal has been one of the hottest markets in the world for the UFC, and the promotion’s first six events in the city did 21,390 fans and a $5.1 million gate, 21,451 and $4.9 million, 17,647 and $3.2 million, 23,152 and $4.6 million, 17,249 and $3.1 million and 16,523 and $3.6 million. The seventh, headlined by Johnson-Kyoji Horiguchi and featuring Quinton Jackson and Michael Bisping in separate matchups, did 10,154 fans and a $668,000 gate. It couldn’t reach one-fifth the average of the previous six gates. The UFC followed that with the Johnson-John Dodson rematch on pay-per-view in Las Vegas on Sept. 5; it resulted in the lowest gate for any UFC pay-per-view event in its top market since UFC 49 in 2004.

The UFC is not running a nonprofit devoted to the advancement of athletic competition. It’s a business, and the company has made that clear in its choices of who gets title shots and even in who gets contracts. Rightly or wrongly, talented fighters like Phil Davis, Jon Fitch, Yushin Okami and Ben Askren have found themselves outside of the UFC in significant part because of the way they fight. Yet here is an entire division that continues on with next to no fan interest while diminishing interest in cards on which they compete.

Now, it’s only fair to point out that divisions don’t immediately become successful. It took time for Anderson Silva to become a pay-per-view attraction, and for some time, he was actually a liability. With that said, does it feel like the flyweight division is even moving in the right direction? It shows no signs of gaining any traction, and if anything, it’s moving backwards. Tickets are moving at slower rates and fans are reacting to the fights with less interest. Fans have gotten a taste of the division and haven’t liked it.

Adding to the problem is that there is so little on the horizon. How many fights are there in the entire division with any significant interest? Johnson-Henry Cejudo is intriguing down the road because of Cejudo’s Olympic background. Dodson-Joseph Benavidez is a fun and fresh matchup. After that, pickings are slim. The division is thin with talent, and most of that talent has already lost to Johnson already. Plus, there just aren’t that many 125-pound men out there to replenish the division.

It would be one thing if dissolving the flyweight division meant we wouldn’t get to see the best fighters from the weight class in the UFC or that they would be at a massive disadvantage. That just isn’t the case. The 135-pound division could use added excitement in its own right, and an infusion of the best flyweight fighters would give you one solid division rather than two weak ones.

The rationale for getting rid of the flyweight division is the same for not creating a 195-pound class. Sure, it would have been great for Rashad Evans to have a 195-pound division in which to compete, just like 125 has been great for Johnson. However, it would have watered down the light heavyweight division and decreased the number of interesting fights that could be made. One of the advantages MMA has over boxing is that it doesn’t have a million weight classes keeping the top fighters from competing against each other.

The elite fighters in the flyweight division have also proved they can compete perfectly well at 135 pounds. Johnson and Benavidez were two of the bantamweight division’s top championship contenders before they moved down; Dodson knocked reigning bantamweight champion T.J. Dillashaw at “The Ultimate Fighter 14” Finale in 2011; and Cejudo debuted at bantamweight and has struggled to make 125. Their speed works to their advantage in lighter weight classes where speed is at a premium.

Right now, the bantamweight and flyweight divisions are struggling for top-flight fights beyond the forthcoming Jan. 17 Dillashaw-Dominick Cruz showdown, which is one of the most intriguing upcoming fights in any weight class in the sport. Merge the divisions and the future gets brighter. How would Johnson fare against the champion of the higher weight class in Dillashaw? Could Dodson’s speed and footwork pose problems for Cruz? How would Urijah Faber deal with a young lion in Cejudo? Would Renan Barao be able to get some Team Alpha Male revenge against Benavidez?

Dumping the flyweight experiment would open up many fight possibilities and help out two weight classes that are struggling to stay afloat. It would also help to remove the stink that’s now becoming associated with a number of excellent fighters because they compete in a division people don’t pay for and don’t react to. It’s time for the 125-pound weight class to grow wings and fly away.