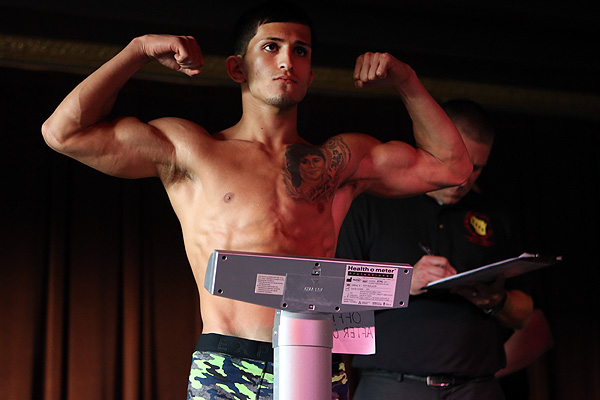 Fifty three seconds and a stunning one-two combination was all it took for Sergio Pettis to defeat late replacement Dillard Pegg at RFA 8’s main event on Friday night, and the quick finish immediately stirred up talk about what’s next for Anthony Pettis’ little brother, who was pegged as a prospect long before he ever stepped into the cage.

Though a win over former UFC and Pride veteran Jeff Curran would have had more impact, the televised highlight-reel finish he scored over late replacement Dillard Pegg was certainly the best finish “The Phenom” could have hoped for.

Sergio shows every bit as much potential as his older sibling, but it’s worth noting that it wasn’t until Anthony’s 20th birthday that the UFC star stepped inside the cage for his professional debut for Gladiators Fighting Series. He made quick work of his first opponent -- a 24 second TKO victory. He followed this up with a 12-second submission win not seven months later, and it took a whopping total of 36 seconds for his third opponent to tap out due to strikes. Anthony then had two more first round TKO victories before he ever fought to a decision, winning the Gladiators Fighting Series lightweight championship by defeating Rob Roy, who was 16-4 at the time with wins over Nik Lentz and Kyle Watkins. Showtime then went on to defend with two more quick first-round victories; 8 fights and 8 victories in two years of pure domination before he ever fought for the WEC at the age of 22.

And Sergio? To say he got started younger would be an understatement. He holds an RFA belt although he’s not yet old enough to legally drink a Miller Lite with his buddies. The kid made his amateur MMA debut before he could drive.

With every athlete who fancies himself a fighter dreaming of making it into the UFC, the slow rise to the top isn’t easy. But much better to see a prospect fine-tune the less refined aspects of his game than crash and burn because he rushed in before he was ready. RFA’s deal with AXS will give Sergio some exposure on TV; he can slowly showcase the wrestling he’s working with Bellator champ Ben Askren and his flashy kickboxing and TKD, as well as take on more challenging opponents as he’d hoped to by agreeing to fight Jeff Curran.

As much as MMA fans may want to see how Pettis stacks up in a tough flyweight division, or if he’s as good as his brother in the big show, there’s a certain beauty to a sustainable growth. But perhaps it’s not so much Sergio’s age but the depth of his weight class. Rory MacDonald jumped into the deep end of his division early, starting his UFC career at 20-years-old, but there are 79 fighters in the welterweight roster. The former KOTC champ didn’t exactly need to be built up slowly, but at least the possibility was available.

Not so for the UFC’s 125-lb. division. All 14 flyweights are at the top of the food chain. Jackson’s MMA product Azamat Gashimov was 7-1 with six stoppages before signing to the UFC where he’s lost two in a row; Ulysses Gomez was 9-2 with seven stoppages before doing the same (and getting cut from the promotion in the process). Jungle Fight veteran Iliarde Santos will be trying to work his way up the ladder by facing Ian McCall at UFC 163. There are no easy flyweight fights in the UFC. Someone as young as Sergio Pettis might be better served through a year or two of patience; enjoying the sweetness of victory in the regional circuits, getting more used to cutting weight and staying on the UFC’s radar, along with guys like Sean Santella and Zack Machovsky (or fighters like Will Campuzano hoping to work their way back in). There’s a big range of talent between opponents like Joe Pegg, who stepped in for the fight on short notice after having fought less than two weeks prior, and the very stacked flyweight division in the UFC. Sergio Pettis has so much room and time to grow.

Perhaps some younger fighters who were quickly cut may wish they had been better prepared, but ‘the UFC isn’t going anywhere’ is a counterintuitive thought in a promotion where people who aren’t even in fight shape quit their jobs to join reality shows.

And trying to remain patient when you’re in the promotion doesn’t have much payoff. Just ask Anthony Pettis.:10 fights into his career with a win over the current champ, and he’s champing at the bits. Begging to fight injured to avoid missing out on a title shot -- a fight he called for in a weight he’s never made. Currently waylaid by an unfortunate knee injury, Pettis’ loss to Clay Guida while Frankie Edgar and Gray Maynard completed their long trilogy kept him away from that shot. A quick KO of Joe Lauzon wasn’t enough, so Anthony had to get creative.

But for Sergio, a balanced, smart approach seems to make more sense.