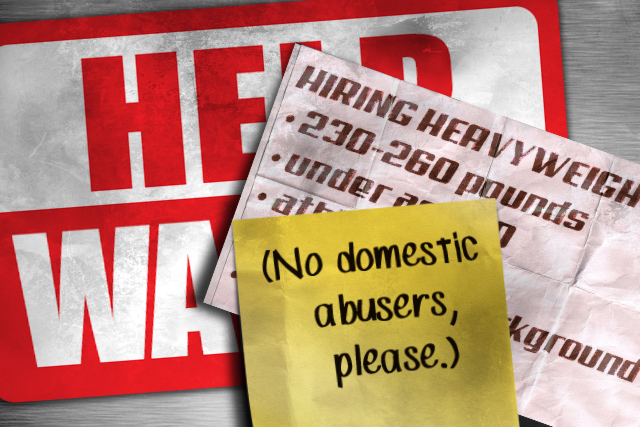 Former NFL defensive end Greg Hardy is 3-0 as an amateur mixed martial artist, and it was announced this week that he would appear on Dana White’s Tuesday Night Contender Series in June. Assuming the show follows its usual pattern, it will most likely result in the one-time Pro Bowler being signed to compete under the Ultimate Fighting Championship banner.

When I think of the possibility of Hardy fighting in the world’s flagship mixed martial arts promotion, I find myself paraphrasing veteran UFC color commentator Joe Rogan. If you were to construct a fighter in a lab who embodied all the qualities mixed martial arts needs less of, that fighter might look a lot like Hardy. That seems an odd thing to say about a 29-year-old man who stands 6-foot-5, weighs 270 pounds and was a standout athlete even by NFL standards. He seems to embody everything a man would need in order to become the immediate talk of the aging, stagnant heavyweight division. Of course, Hardy is the talk of the division now, but not for any of those reasons.

So that nobody can accuse me of being vague here, I will say this as plainly as I can: Hardy should not be fighting professionally at all, and the decision makers at the UFC should be ashamed of themselves for even entertaining the possibility of signing him. For those who aren’t familiar with Hardy’s issues, here is a brief breakdown. In May 2014, Hardy was arrested for assaulting an ex-girlfriend and threatening to kill her. He was found guilty in July of that year and sentenced to 18 months’ probation. When he appealed, the victim failed to appear in court to testify against him and the prosecutor’s office could not locate her. The charges were dropped, and Hardy was, in the legal sense at least, in the clear. That is the reason Hardy, instead of pulling down eight figures annually with some NFL team, is fighting amateur MMA in the first place and hoping to sign with the UFC for 80-and-80 or whatever the promotion ends up offering him.

There are other less-than-flattering marks on Hardy’s history. He was arrested for cocaine possession in 2016; he had to be censured by the Dallas Cowboys for inappropriate social media posting; and he was known as a locker room malcontent during his football career. However, none of those represent a bar to competing in the UFC. In fact, the organization deals with recreational drug users, “rape van” tweets and general attitude problems on a regular basis. When it comes to Hardy’s burgeoning cage fighting career, the domestic violence incident is absolutely the elephant in the room.

Hardy’s domestic violence incident is not a case of “she said, he said” where nothing was ever proven. It is a case where Hardy was convicted by a judge based upon a preponderance of evidence. Hardy appealed, requesting a jury trial. The prosecutor’s office ended up dropping the charges after being unable to locate the victim and being told she had reached a civil settlement. Nothing about the clearing of Hardy’s charges even purports his factual innocence, and a reasonable person would be likely to conclude that he did in fact strike and choke the woman in question. In the wake of the dismissal of charges, images of the victim and witness accounts of the evening were released publicly, and they are horrifying.

By allowing Hardy to compete and vie for a roster spot in the sport’s premier organization, mixed martial arts as a whole and the UFC in particular have embraced a morally repugnant position and elicited a growing public relations storm as a result. The NFL, which has faced its own backlash in recent years over perceived lenient treatment of domestic abusers, has declared Hardy persona non-grata by assent rather than by edict. He isn’t currently banned by the league; it’s simply that no team will sign him. For the UFC to imply that it may sign Hardy if he can make the company some money, thus shouldering its way behind the NFL on this matter, is a race to the bottom of a particularly ugly barrel.

Make no mistake, the UFC was complicit in this long before the DWTNCS spot was announced, by its silence if nothing else. Hardy was accustomed to making over $10 million a year during his NFL run. He would never have entered mixed martial arts without a hope of competing at the highest levels, where the paychecks might at least be better than he could make in an arena or overseas football league. A UFC with a moral center, represented publicly by a frontman without a reputation for emotionally fueled hyperbole and outright dishonesty, could simply have said two years ago that “Greg Hardy will never fight in the UFC. Don’t bother.”

Instead, while the UFC may eventually think better of this decision, with or without the impetus of public pressure, nobody will believe anything until they see it. Even if the UFC decides to withdraw the DWTNCS offer because of simple self-interest, due to public backlash now or fear of repercussions should Hardy have another such incident while under contract, I hope it does the right thing. I should stress that the particular nature of Hardy’s alleged crime is crucial here. Mixed martial arts has an obligation to be even less tolerant of domestic abusers than other sports. Put simply, if you have a personal history of punching, choking and otherwise brutalizing people who did not consent and cannot hope to defend themselves, you should not be extended the opportunity to punch, choke and otherwise brutalize people for a living. You should not be lauded, nor paid, for honing the very skills you put to use in injuring and terrorizing a current or former domestic partner. Full stop.

I am not a fan of people being rendered unemployable as punishment for real or imagined crimes. From the lifelong difficulty those convicted of felonies have in finding decent employment to the social media “shame laser” that puts heat on businesses until they fire an employee accused of saying offensive things, I am deeply uncomfortable with it. I also do not entertain any delusions of “cleaning up the sport,” nor do I have any huge desire to do so. Mixed martial arts is thinly regulated violence. As such, it will always attract its share of misfits, miscreants and antisocial head cases -- the exact type of people who might find violence for pay an attractive proposition. To an extent, outside-the-cage mayhem may always be a part of this sport, but that doesn’t mean it’s condoned when it happens. In any event, Hardy’s case is fundamentally different from two fighters coming to blows in the locker room, and in nuance, it is even different from fighters winging cups and bottles around a room full of media.

For these reasons, I do not advocate that Hardy be made unemployable, only that he be barred from transitioning to a new career in professional fighting -- an occupation he demonstrably lacks the temperament to navigate. There are many things Hardy, a young and physically gifted man, could do to earn a living. MMA should not be one of them.