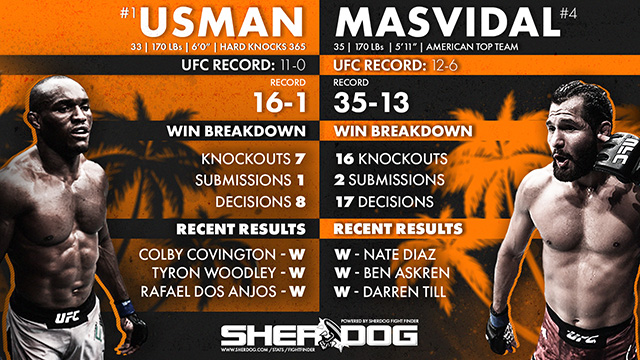 Sign up for ESPN+ right here, and you can then stream UFC 251 live on your smart TV, computer, phone, tablet or streaming device via the ESPN app.

If nothing else, MMA is a sport with no shortage of extremes. There are freak athletes, physics-defying displays of violence and stories of calamitous misfortune playing out alongside those of the heart-warming, rags-to-riches variety.

Jorge Masvidal’s tale is one of the latter, an “overnight” success 17 years in the making who came out of nowhere to become a breakout star in 2019 after years toiling as a talented-but-overlooked fixture on the Ultimate Fighting Championship’s lightweight and welterweight rosters. He will fight for the undisputed 170-pound title in the UFC 251 main event on Saturday, as he looks to enter combat sports immortality by taking out Kamaru Usman on seven days’ notice.

A truncated version of the “Gamebred” career biography has been written many times over in the past 15 months, and it’s a story that lends itself to re-telling.

The son of immigrants who grew up in unenviable circumstances in Miami. His father, originally from Cuba, sent to an 18-year federal prison sentence on drug charges when Masvidal was just 4 years old. His mother, from Peru, making ends meet selling beads. Their adolescent offspring, who would one day have his face plastered on billboards across the globe, getting into fights early and often, inadvertently acquiring the tools that would propel him to combat sports stardom 20-plus years later.

The “thugged out goon from Miami” began competing in underground bareknuckle fights at 14 years old. He got the call to fight “Ray,” a protégé of Internet sensation Kevin “Kimbo Slice” Ferguson when he was 18 years old and about to place his order in a McDonalds drive thru. That same year, with two victories over “Ray” under his belt and a reputation which preceded him on Miami’s South Beach, he made his professional MMA debut at a small show in Fort Lauderdale, Florida. He knocked out little-known 13-fight veteran Brandon Bledsoe in the first round.

Between then and now, there isn’t much of the MMA world that Masvidal hasn’t seen. He had a stint in the short-lived-but-fondly-remembered Bodog Fight promotion, taking bouts in Costa Rica and St. Petersburg, Russia, before its principal, Calvin Edward Ayre, was indicted on illegal gambling and money laundering. He had a handful of fights in Bellator MMA while it was still under the control of Bjorn Rebney, competing in the inaugural lightweight tournament but coming up short in the second round. He was factor in Strikeforce’s lightweight division, circa 2011-12, challenging Gilbert Melendez for the 155-pound title, but he was outclassed by “El Nino” over 25 minutes and was jettisoned back into the queue of contenders.

Masvidal then arrived in the UFC, transferring from Strikeforce after the promotion was acquired by Zuffa. It kickstarted a run in the most competitive divisions in history that was equal parts exciting (see: stoppage victories over Michael Chiesa, Jake Ellenberger and Donald Cerrone) and anticlimactic (see: split decision losses to Al Iaquinta, Benson Henderson, Lorenz Larkin and Demian Maia). Even though “Gamebred” was the victim of more than one decision which could easily have gone his way, his proclivity for mid-fight inactivity cost his dearly; and with a middling 9-6 record in the UFC, something clicked inside him during a self-imposed hiatus while filming the reality show “Exatlon Estados Unidos” in 2018.

He returned for the self-titled “Resurrection” tour in 2019, starching former title challenger Darren Till inside two rounds before scoring the fastest knockout in UFC history over Ben Askren at UFC 239. He parlayed his newfound infamy into an inaugural “BMF” title fight with Nate Diaz at UFC 244 at Madison Square Garden in New York, winning via doctor stoppage after dominating for three straight rounds. In between these conquests, all kinds of Masvidal quotes entered the MMA lexicon, including the “three-piece with a soda” (a reference to some extracurricular punches thrown Leon Edward’s way in London) and “super necessary” (the punches Masvidal landed on Askren after he was unconscious). Masvidal was the BMF “baptizing” fools inside the Octagon and oozing charisma outside of it, riding a huge groundswell of support on route to a 2020 title shot opposite Usman.

First, Masvidal took a detour, going head-to-head with the UFC brass on the small issue of compensation. Proving that he wasn’t just willing to take on Goliaths inside the cage, he visibly and vocally challenged the promotion’s pay structure, publicly airing his grievances about the Usman negotiations, going on ESPN quoting figures from the antitrust law suit and savaging the 80/20 revenue split in favor of the company. The UFC responded by promptly subbing in Gilbert Burns as the UFC 251 headliner opposite Usman, only to crawl back to Masvidal with a more generous offer when “Durinho” tested positive for COVID-19 at the Eleventh Hour.

"We were hanging out, eating food, talking ****!" @GamebredFighter reveals how he negotiated his UFC contract at a BBQ with nothing but a pen & paper #UFC251 pic.twitter.com/3HJMKMoePN

Now, a Versace-robe-clad Masvidal has ridden in on a white horse to save the UFC’s inaugural Fight Island event, lacking the benefit of a full-camp or even his head coach—American Top Team trainer Mike Thomas Brown tested positive for COVID-19—but exuding confidence nonetheless. When asked whether he was concerned about his lack of preparation, the weight cut or the overseas travel, he laughed off those concerns in typical “Gamebred” fashion, telling ESPN: “If you’re asking me, are you in shape? Maybe not to fight Ben Askren. I’m not in Ben Askren shape, because he’s a hell of a wrestler—or even to fight a guy like Darren Till—but am I in shape for this bum I’m about to decapitate and baptize? Hell, yeah.”

To hear Masvidal talk, it’s a foregone conclusion that he rolls over Usman and becomes the UFC’s 13th undisputed welterweight champion. If he is able to follow through on this promise, he’ll be the guy who went 2-0 against the UFC and Usman, all inside seven days. It’s an enormous gamble and the smart money says it’s unlikely, but if Masvidal manages to pull it off, it would be a story like none other in our sport’s history.

Jacob Debets is a lawyer and writer from Melbourne, Australia. He is currently writing a book analyzing the economics and politics of the MMA industry. You can view more of his writing at jacobdebets.com.
« Previous Prime Picks: UFC 251 ‘Usman vs. Masvidal’ Next UFC Partners With Venum for Outfitting Following Expiration of Reebok Deal »
More
Latest News
ALLUFCBELLATORPFLONE