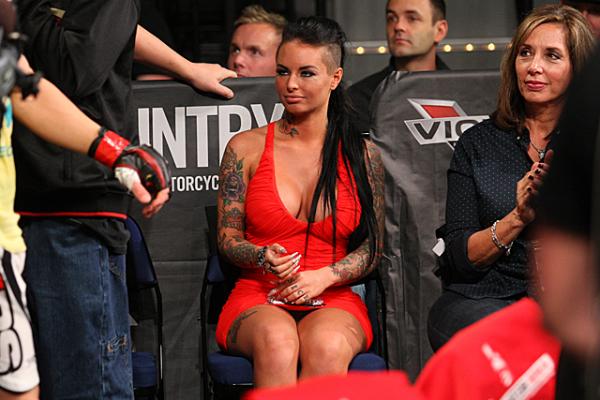 MMA is a violent sport, and not always in the most sublime way. On Tuesday night, HBO's “Real Sports” probed that idea in harrowing fashion, as journalist David Scott presented a feature on the strong and septic presence of domestic violence in mixed martial arts. Anchored by a sit-down interview with Christy Mack in which she details her horrific beating at the hands of ex-boyfriend War Machine, the piece wasn't new per se, focusing on well-known recent incidents of domestic violence in the sport, but it was damn necessary. MMA has many faces, many of them ugly at that, but I'm not sure there's any more disgusting than this.

This is a sport that needs to see its own reflection and reflect on it. Often.

However, the minute I saw a Microsoft Office graph pop up on my television screen, I grimaced. I didn't grimace because of HBO's sobering findings: that mixed martial arts has a domestic violence arrest rate of 750 per 100,000 men, as compared to 210 in the NFL and 360 in the general American male population. Instead, my face flinched because as soon as I saw the data, I knew the murky methodology would unintentionally overshadow the vital discussion that the segment had just amplified.

In general, I'm skeptical of domestic violence statistics, given how routinely abuse victims decline to speak up or press charges against their attackers. The underreported nature of these crimes logically suggests to me that in actuality, these numbers should uniformly be higher, regardless of whether they pertain to an MMA fighter or a librarian. Yet, I find the 750 arrests per 100,000 men statistic dubious for the same reason most other observers did. “Real Sports” host Bryant Gumbel stated the data came from reviewing “hundreds of current fighters, dating back to 2003, focusing on Americans ranked in the top 200 in several weight classes.”

This methodology is simply full of holes. Does that mean fighters who were in the “top 200” any time in the last 12 years or just at this moment in time? Whose “top 200” is this? Could it even be something other than FightMatrix?

Why are only Americans important? Women are victimized all over the world, by men of many passports and MMA is a fairly diverse sport. Who is American, someone born in the country? Do naturalized citizens count? Thiago Silva is responsible for one of the most horrific acts of violence against a woman we've encountered in this sport. What country do they think he's from?

Also, this is a news feature about domestic violence in MMA, not specifically “when male fighters beat and terrorize women.” I would never be so daft as to suggest that violence against men is just as prevalent in and out of this sport, but it does exist. Go read Clark Bevans' request for a restraining order against ex-wife and women's MMA pioneer Erin Toughill. While you laugh and snort “Yuk yuk, beat up by a girl!”, imagine an alleged drunk, pilled-up, psychologically-frought 170-pound pro fighter attacking you on a whim, smashing your vehicles, stalking you, threatening your children, attempting to steal your medical and financial records and physically assaulting anyone they perceived to be a romantic rival no matter how insane the notion. This is definitional terror.

According to the CDC's landmark 2010 National Intimate Partner and Sexual Violence Survey, the lifetime prevalence of violence by an intimate partner was 43.8 percent for lesbians and 61.1 percent for bisexual women (as compared to 35 percent for heterosexual women). MMA has a vibrant LGBT community. Something has to give.

Most importantly, comparing MMA, the NFL and the general population is non-sensical given the structure of mixed martial arts itself. This infographic did not refer to the UFC, Bellator, or any other specific promotion, but the sport on the whole, a sport which does not exactly have a stringent barrier to entry. Unless you happen to be a true phenom, neither you nor I are going to walk on to an NFL squad. Conversely, either one of us could get an MMA fight booked on a local show by the time you're done reading this column. HBO claims its methodology focused on those “top 200” in “several weight classes,” an attempt to appropriately control the sample and adjust it to the “level” of NFL competition. But, we don't know the fighters, the weight classes, why only males, why only Americans, so on and so forth. Even if these numbers were the truest, legitimate representation of domestic violence in MMA, it would seem “Real Sports” curiously arrived at the correct answer with the wrong equation.

Naturally, I don't begrudge “Real Sports” for doing original research and presenting it in the piece. In the interest of producing well-rounded reporting, it's what's appropriate. In fact, HBO opted to push its “objective” statistical analysis rather than relying on some of the sensationally inhumane details of the cases it detailed, i.e. mentioning Josh Grispi being charged with beating his wife, but not mentioning his attempt to alledgedly have his pitbull maul her to death. However, at the risk of sounding like your sophomore algebra teacher, in this case, the equation is more important than the answer. This is a realm where process trumps the product.

HBO's offering was not designed to be an exposé, as the sport's problems with domestic violence were already unfortunately well-known to fans. It was meant to be a provocative primer for those not “in the know” about MMA's repugnant side and for diehards, a piece to encourage reflection on the culture that supports and suborns domestic violence. The problem is that these imprecise statistical claims, while not offering anything intellectually substantial because of the shoddy methodology, undermine the crucial, conscious content of the piece, even if it shouldn't.

True story: my senior year in high school, a shy, nerdier gentleman in my Global History class gave a particularly rousing 10-minute speech about the Wright brothers and the political difficulties they experienced in developing the airplane both in America and Europe. I had never heard this kid speak, yet he was a passionate, articulate orator. I loved his presentation and the sheer amount of old-school research that went into it was obvious. He deserved to be celebrated: for everyone to leave the room and share something fascinating they just learned about aviation history.

Instead, I realized after class that the gentleman's fly was down during the speech, to the extent that his boxers were peeking out of his pants. Apparently, his undergarments had magnetized the entire class. I was seriously the only human being in a room of 30 who retained anything he said, all because his zipper was down. It was an important moment for me, realizing that well-crafted, thoughtful content can be ignored or impaired by even the slightest oversight, intentional or not.

Witness this Huffington Post article, predictably titled “HBO Investigation Finds MMA Fighters Commit Domestic Abuse At Rates Far Exceeding NFL Players.” This story makes it to the U.S.'s most popular political site and news aggregator, but it's entirely hinged on the briefly-referenced, poorly-conducted in-house research. In turn, it creates an entirely false narrative and ridiculous discussion: the comments section is overrun with inane conversations comparing War Machine to Ray Rice, morons hypothesizing that fighters and football players are abusive because of roid rage and classic “Duh! This shouldn't even be legal, it's not a real sport!” foolishness.

The inclusion of questionable data also refortifies the age-old “us vs. them” mentality in MMA. Historically, MMA fans have been defensive about everything. Fans used to have to defend the sport from human cockfighting rhetoric on a moral level (“How barbaric! I heard they die in the cage!”) and more recently, they've become accustomed to defending the sport as a matter of taste (“Ew, you like that? You own any Affliction shirts?”). Outside of the graph, the reporting was spot-on, yet the nature of the data was dubious enough to spark outlandish conversations of the report being a “hit piece.”

The lack of quantitative rigor (or perhaps misplaced quantitative rigor) isn't just a red herring either, it's a lightning rod for idiocy. When analysis such as “MMA fighters are over three times more likely to beat up their spouse!” is offered up without a thorough, buttoned-up approach, the lame-brained are empowered to be dismissive. “Oh, where'd you get these numbers? What a joke. MMA isn't more dangerous than the NFL!” All of a sudden, we're right there again, racing downhill to conversational rock bottom, confronting with unintended strawmen, rather than the true and disconcerting underbelly of the sport.

Shoddy graph aside, I'm thankful HBO, "Real Sports," David Scott and his interview subjects told this story. Domestic violence in sport is an issue only now getting more serious cultural examination and so far, that conversation in the mainstream hasn't included prizefighting, in spite of the obvious component violence. MMA will always draw hoards of athletes from social turmoil, attracting the most brutal and broken individuals who feel they can turn their penchant for violence into a paycheck. Simultaneously, we still inhabit a sport where promoters rush to forgive and promote athletes that abuse their partners, where those abusers themselves still believe it is acceptable recompense to plead no contest in court and then talk about “being in the past” and “moving on.” These are circumstances that dictate this be a necessary and routine conversation in MMA, as painful as it might be. Without it, there's no hope for those complicit to ever realize the extent of their damage or ever make any meaningful changes as people.

When we talk about domestic violence in MMA, we must ensure that's the conversation we're actually having. No matter the gravity of the topic, it takes just the slightest slip-up -- one set of suspect statistics, one unzipped fly -- to contaminate the conversation and destroy its ability to philosophically, morally engage its subjects.

I don't know what the “real” numbers are, how the NFL and MMA “really” compare as far as domestic violence arrests go. What I do know, though, is that the “real” numbers should not be this sport's primary concern at this moment. MMA shouldn't be bothered with being “better” than the NFL, because right now, MMA needs to look long at its own reflection and start being better than its ugly self.