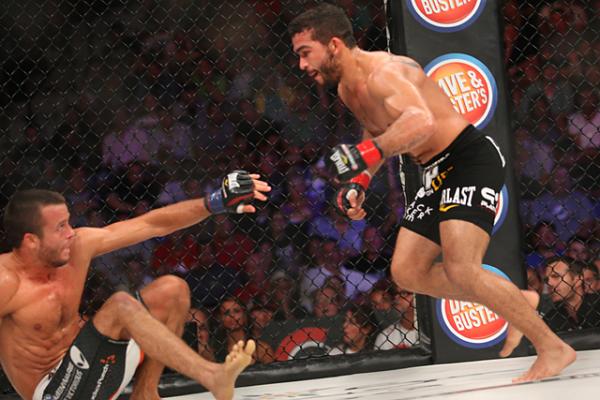 Pat Curran and Patricio Freire could not outdraw the UFC on Sept. 5. | Photo: Keith Mills/Sherdog.com


The bad news for Spike TV from its head-to-head television matchup against the Ultimate Fighting Championship on Sept. 5 was the fact that it lost. It was not a blowout, but Bellator MMA’s rating was reportedly smaller by a couple of hundred thousand viewers. Pat Curran-Patricio Freire was an excellent fight for Bellator on paper, as was Ronaldo Souza-Gegard Mousasi for the UFC; and Alistair Overeem-Ben Rothwell added slugging star power. The combined viewership for UFC and Bellator was 1.6 million viewers.

However you spin the ratings loss for Bellator, there was a lesson to be learned from the confrontation with the UFC. The ratings numbers confirm that if Bellator is going to match the UFC number-for-number in viewership, competitive intrusion is not the way it is going to reach its business goal. If Bellator wants to win, it has to grow the overall MMA audience domestically in the United States and Canada. When I recently talked with Bellator play-by-play announcer Sean Wheelock about growing the current MMA audience, he was very confident that there were lots of people who still do not follow or do not like MMA who can be converted into fans. He believes the key ingredient in attracting new fans is presenting a product that is energetic and fun.

Despite the UFC’s overall declining ratings on Fox television platforms, its fan base remains as loyal and hardcore as ever. They may have become more selective in what UFC events they choose to watch, but they are UFC-first people all the way. They are not going to buy into the idea that the Bellator product is equal to or better than the UFC’s. This is not merely a product of loyalty to the UFC because of its brand name. Rather, the loyalty comes from the fact that the UFC has the superior talent on its roster. If Bellator and Spike TV are going to increase their business to match the UFC’s ratings numbers, they are going to have to create or win over disgruntled MMA fans. The number one source for attracting new fans is by persuading professional wrestling fans, past and present, to give Bellator a chance -- the same way fans of World Wrestling Entertainment’s “Raw” gave “The Ultimate Fighter” and the UFC a chance a decade ago on Spike TV.

Certainly, there is some public relations value in Bellator going head-to-head against the UFC. Any time you can get the Bellator name in the same conversation as the UFC, it provides a shot in the arm for credibility. Social media and public-relations buzz, however, is not going to deliver an automatic gain in television viewers. ESPN recently aired a Canadian Football League game head-to-head against NFL games on CBS and Fox; as fun as the CFL product is to watch, nobody is mistaking it for the NFL. The CFL is not going to poach viewership away from the NFL. What it can do is build its own core constituency and persuade some NFL fans on an off-night to watch a CFL game or two. That is the strategy Bellator is going to have to implement long-term against the UFC if it wants to survive with the new corporate philosophy that has been implemented by Spike TV.

There simply are not enough swing MMA viewers who will abandon a UFC show to watch Bellator. If Spike TV is going to increase its viewership numbers, it is going to have to utilize its TNA professional wrestling television property and figure out a way to attract WWE fans to watch its product. On Sept. 5, Bellator’s primary competitor in the battle for ratings was not the UFC; it was the WWE. The SyFy network, which supposedly was going to move WWE “Smackdown” from Fridays to Thursdays, ran “Smackdown” opposite UFC and Bellator. “Smackdown” drew 2.7 million viewers, easily beating the UFC and Bellator combined by more than a million television viewers. Those WWE viewers helped create the UFC popularity boom years ago with Brock Lesnar as the heavyweight champion; and the same audience could either create a second boom period for the UFC or help create one for Bellator. UFC commentator Joe Rogan may not like professional wrestling or the fans that watch the WWE or TNA, but those same fans helped produce momentum for some of the biggest events in Ultimate Fighting Championship history. See UFC 100. 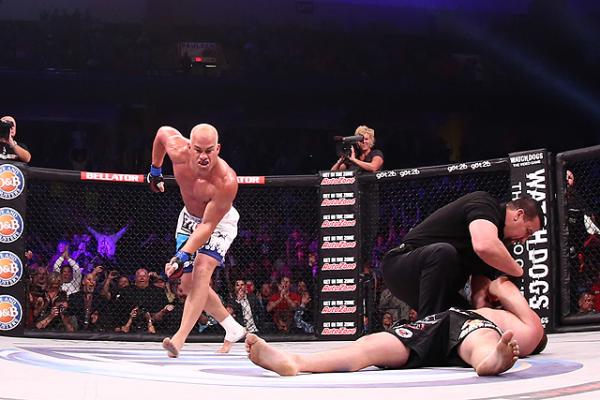 (+ Enlarge) | Photo: Dave Mandel/Sherdog.com
Ortiz returns in November.
When Bellator and the UFC go head-to-head on Nov. 15, Bellator will not have to compete against WWE “Smackdown.” That is a plus for Spike TV. There will certainly be some buzz for the next head-to-head battle, but it is more symbolic than substantive. UFC fans who want to watch Cain Velasquez-Fabricio Werdum are not going to give up buying the pay-per-view in order to watch Tito Ortiz-Stephan Bonnar. They will simply DVR the Bellator show or skip it entirely. Conversely, Bellator and Spike TV will hope to put a dent in the ratings for the UFC 180 prelims on Fox Sports 1. Any victory will be a moral victory, I suppose.

Spike TV executives understand that the way they are going to increase their viewership is by courting professional wrestling fans, much in the same way that political pollsters and focus groups try to court independent voters in elections. Your two major political parties in the wrestling-MMA space are the UFC and the WWE. In order for Bellator to succeed, Spike TV is going to have to convince a small amount of UFC fans and a significant amount of WWE fans to accept Bellator as a real programming alternative. Spike TV is going to have to build a coalition of fans, much in the same manner it did a decade ago when it convinced WWE “RAW” viewers to give the UFC and “The Ultimate Fighter” a chance. WWE Chairman and CEO Vince McMahon learned how painful allowing Spike TV to use his company to build the UFC was for his corporate bottom line.

The question centers on whether or not Spike TV’s decade-old playbook will work in today’s environment. Spike TV got into the MMA game on the cheap with Bellator and its founder, Bjorn Rebney. It budgeted $50,000 to $60,000 a show and ran on volume: 26 weeks’ worth of shows, or a show every other week in a seasonal, tournament format. The great irony is that Spike TV’s frustrations with Rebney grew while Bellator’s ratings seemed to show some increasing improvement. The buy rate numbers from its PPV show proved it had some momentum, even if it was quirky. Rebney found himself in a no-win situation. Spike long had a vision of using its old playbook to make a big splash, and Rebney was not entirely down for the cause. You do not bring in Scott Coker as president, Rich Chou as matchmaker and Jason Jordan as COO unless you are looking to hit a home run. Spike TV played small ball for a couple of years and became impatient. Now that it is swinging for the fences, it has to build a new coalition of fans right here and right now.

When I wrote about a five-point Bellator battle plan to increase its core MMA business, I focused mainly on what the company could do to attract non-wrestling fans. It needed some crossover fights with Glory stars, a campaign to win over new and disenchanted Canadian fans who have been burned by the UFC and a marketing blitz to establish a real foothold on the East Coast, especially in a market like Washington, D.C., where the money is flowing; and it needed to cut back on the number of weight classes. All of these ideas can help Spike TV build up its hardcore fan base. Eventually, Spike TV is going to want to make money on pay-per-view. To do that, it is going to need hardcore MMA fans and a bunch of WWE fans -- the same kind of WWE fans that helped Lesnar shatter UFC PPV records.

In order for Bellator to match or exceed the UFC’s current business numbers, Spike TV is going to have to try to beat Fox to the punch in attracting the Michelle Beadles of the world to watch its product. It also needs the diehard WWE fans who like MMA as an alternative and not as a replacement product. There are lots of different factors that could impact the Bellator business plan. What is the future for the WWE Network amidst a report from “The Wrap” that Warner Brothers may sign a video library content agreement? What is the future for UFC Fight Pass given how many shows the Ultimate Fighting Championship is producing for the website, along with additional video tape libraries it wants to purchase for additional content? What is TNA’s future on Spike TV? Will Spike TV keep TNA around as a discount in order to use it as lead-in programming for Bellator to help boost ratings? What night will SyFy air “Smackdown” in the future? How much longer will “The Ultimate Fighter” last? Could it become something Spike TV targets with the Bellator vehicle? The biggest question of all, however, centers on who will win over professional wrestling fans and create a new boom period. Will the UFC go for the kill and bring back Lesnar for some super fights? It is not as far-fetched as you might think. If UFC President Dana White is talking about an automatic title shot for Georges St. Pierre, Lesnar is certainly not out of the question.

The battle over which MMA property can connect with professional wrestling fans will tell us a lot about how business will look in 2015 and beyond. Spike TV knows this all too well.