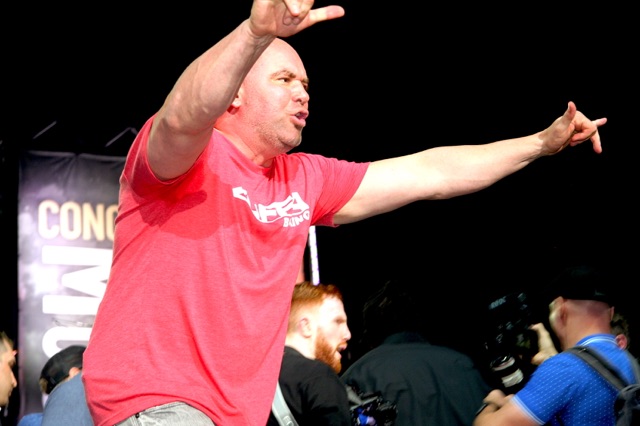 After Zuffa, LLC first acquired the Ultimate Fighting Championship in 2001, the organization would hold anywhere between five and seven events. Not in the span of a month or two, but across an entire year. All were pay-per-views and would aim for eight matches per card. Thus, in 2001, there were a grand total of 40 UFC fights. Now, two points are important here: During that time, there was a small fraction of the current MMA talent, and the UFC wasn't even the premier organization in the sport. That would be Pride Fighting Championships.

Despite this, almost every single fight on these old cards featured at least one world-class fighter and was important for the top rankings in the weight class. As an example, let's look at UFC 32. I chose this particular PPV since it was considered relatively weak for its time compared to the loaded UFC 31, headlined by Randy Couture and Pedro Rizzo's legendary first encounter, or UFC 33, which, despite Dana White calling it the “worst show we ever had” due to the high number of decisions—leading to the broadcast infamously cutting off during the main event—was also the first UFC event with three title fights. That's significant considering there were a grand total of five divisions in the UFC back then, with the inaugural middleweight (185 pound) championship being contested that night; the majority of the promotion's titles were on the line in one card.

UFC 32 was headlined by Tito Ortiz, then the consensus best light heavyweight in the world, having defeated Wanderlei Silva a year ago, defending against Elvis Sinosic. Sinosic was admittedly one of the weakest world title challengers ever, with only a victory over Jeremy Horn to recommend him, but Ortiz was the clear No. 1. At lightweight, a top 4 guy in Din Thomas, who had a victory over current UFC champion Jens Pulver, was facing a young phenom by the name of B.J. Penn, already considered a potential world champion due to his grappling pedigree and outstanding debut one event earlier. Penn knocked Thomas out in the first round.

At heavyweight, Top 10 contender and very soon to be UFC heavyweight champion Josh Barnett looked to rebound from his first career loss to Pedro Rizzo by taking on the nearly 7-foot, all-time great striker and Pancrase champion Semmy Schilt, at that time also considered Top 10 thanks to a long winning streak and impressive knockout debut at UFC 31 against Pete Williams.

At welterweight, recently dethroned UFC welterweight champion Pat Miletich, still probably the second best in the world at that class after champion Carlos Newton, faced off against Shonie Carter, at that time a well-traveled, borderline Top 10 talent who had a slew of good wins on his record such as Chris Lytle and the massively larger, soon-to-be middleweight champion Dave Menne, and was coming off a sensational spinning backfist knockout of Matt Serra.

At lightweight, Caol Uno, who had just lost a world championship bout against Pulver at UFC 30 and was still widely considered the second best in the world at that weight, faced off against the surging, borderline Top 10 Fabiano Iha, who had started his UFC tenure by losing to two larger men in Menne and LaVerne Clark, but was on an impressive three-fight winning streak, all stoppages, including avenging his loss to Clark.

At light heavyweight, highly regarded Pancrase legend Yuki Kondo, who had challenged Ortiz for the world championship recently, faced off against highly regarded Vladimir Matyushenko, a star of the significant IFC promotion, with a slew of solid wins and only a single, controversial loss on his record. As undersized as Kondo was, both were Top 10 at their weight class.

On the undercard, which wasn't even televised on PPV unless time permitted, two highly regarded prospects fought at heavyweight. Both Andrei Arlovski and Ricco Rodriguez would become world champions within the next few years. Lastly, Tony DeSouza fought Paul Rodriguez at lightweight. This was the only match on the card not to feature a world-class fighter or significant prospect.

Why am I going through all this? Oftentimes, looking back at old UFC cards, people judge fighters through a modern lens and don't realize how they were viewed at the time. A relatively forgotten martial artist nowadays might have been considered a tremendous prospect or a world top 5 talent. This isn't helped by the UFC either spitting at or ignoring their own history—Frank Shamrock, anyone?—and adopting an attitude of “latest is greatest,” as evinced by them calling many current champions at a weight class “the greatest of all time” at that class, often after just one title defense.

Looking at UFC 32, that level of consistent world-class quality is unimaginable today, even on PPVs, and while there is a hell of a lot more competition to becoming a top 10 fighter nowadays, the UFC also has a hell of a lot more money and fighters on their roster. Instead, by 2019, the UFC was holding 41 events, one more than the number of fights in 2001, amounting to 517 fights, and that was with one event canceled. One can argue both the economic and entertainment merits of this expansion for dozens of pages, both pros and cons. But what can't be disputed is that a very small portion of modern UFC cards feature any kind of significant world-class talents or prospects.

The much-maligned UFC on ESPN 10 card is an example. The main event featured Cynthia Calvillo, a borderline Top 10 strawweight going up in weight to face the massively, noticeably larger Jessica Eye at flyweight. Eye, despite being ranked right below world champion Valentina Shevchenko on the basis of a 4-1 record at 125, could easily have been 1-4, with split decision verdicts over Kalindra Faria and Katlyn Chookagian and a win over Viviane Araujo for which Eye was significantly overweight. Given how close that last victory was, it's reasonable to question whether Eye would have won without the unfair advantage of missing weight by several pounds. Of course, this is also ignoring Bellator MMA’s flyweight division, which features several fighters I would favor over Eye. Calling her borderline Top 10 at flyweight might be generous.

Throughout the rest of the card, the only serious prospects were Marvin Vettori and Mariya Agapova. That's awfully slim pickings for 10 fights on a card. One fight on the card, Christian Aguilera versus Anthony Ivy, featured two men who weren't even ranked in the Top 100 at welterweight.

Even many of the pay-per-view cards are shockingly weak outside of the few main fights. The main event of UFC 243 was a tremendous title unification match between Robert Whittaker and Israel Adesanya, the No. 1 and No. 2 middleweights on the planet. The co-main was already a big step down, with Iaquinta being 7th in the UFC lightweight rankings and Hooker 16th. The only prospect or ranked fighter on the rest of the 11-fight card was Jake Matthews. That's it. Outside of the main event, many of the random Fight Nights back in the day offered more high-level match-ups.

Whether you approve or disapprove, the UFC is no longer home to only the most elite fighters and prospects at a given weight class. Oftentimes, the per-match quality is weaker than a strong Bellator event, or it feels like a glorified card by Legacy Fighting Alliance, a feeder organization into the UFC, rather than the main show itself.

This would be more palatable if the UFC commentary team toned down their rhetoric, instead of trying to sell every featured fighter as a world-beater. For instance, Dan Ige is a very good, skilled mixed martial artist. However, even ignoring Bellator's talented 145 pound division, Ige is simply not a serious contender or genuine Top 10 guy even within the UFC. His last two fights prior to losing to Calvin Kattar were a very close split decision verdict against Mirsad Bektic and a split decision over Edson Barboza that most people, myself included, felt was an outright robbery, one of the worst decisions of the year.

Of course, that didn't stop the UFC commentary crew from praising him to the moon and back on last Wednesday's ESPN card, which even extended to the fight itself. They repeatedly gushed over Ige punches that missed Kattar by a solid foot, while maintaining stoic silence as Kattar repeatedly battered his tough, game, but overmatched opponent. There were even multiple moments where, after a hard connect by Kattar, the commentary team praised Ige's toughness rather than, you know, the huge blow his opponent landed.

The purpose, naturally, was to make the affair seem much closer than it was, and Ige a deserving, elite fighter. Still, there is only so much one can do to try to fool the audience. As one can plainly see, the quality of the average fight in the UFC has degraded tremendously and continues to do so, and for the foreseeable future, MMA fans will either have to accept it or watch less.
<h2>Fight Finder</h2>
Sponsored by