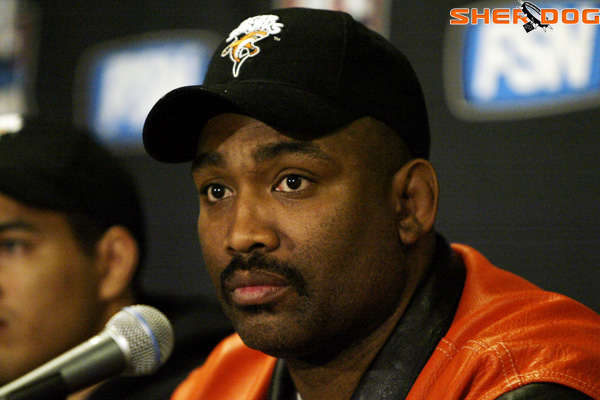 Look around MMA websites, YouTube channels and message boards, and the consensus on the largest upset in history is clear: Matt Serra knocking out Georges St. Pierre to win the Ultimate Fighting Championship welterweight title at UFC 69. While it might be the biggest upset of the post-“The Ultimate Fighter” era, it doesn't hold a candle to the actual biggest upset in MMA history, a fight that just like GSP vs. Serra 1, occurred in the UFC for a world championship. I'm talking about Mark Coleman versus Maurice Smith.

Let's set the stage: Coming into UFC 14 on July 27, 1997, “The Hammer” was 6-0 and considered utterly unbeatable, a force of nature who had brutalized everyone in his path, even other elite wrestlers like Don Frye and Dan Severn. Frye had better striking than Coleman, but was an inferior grappler, the difference between a good wrestler and a world-class one who had come in seventh at the Olympics and second at the FILA world championships. Additionally, Coleman was 245 pounds of pure muscle while Frye was a relatively small 210-pound heavyweight.

Severn might have been a match for Coleman in wrestling in his heyday in the mid-1980s, but by February 1997, when they met at UFC 12 to crown the UFC’s first official heavyweight champion, the 38-year-old “Beast” had a litany of injuries and was well past his physical prime. Coleman, meanwhile, was 32 and looked as powerful as ever. It wasn't just his wrestling, though; Coleman was the first fighter to employ what we now call ground-and-pound. If Severn took a fighter down, that fighter had a good chance of surviving so long as he knew how to defend a keylock. Being on one’s back against Coleman, however, was a death sentence, as he would smash opponents with fists, forearms, and perhaps his deadliest weapon, the forehead.

Back then headbutts were legal in MMA, Coleman's were the most lethal in the sport, crushing the opponent's face underneath his giant noggin. Who could stop this unbeatable monster's takedown? Who could survive under his ruthless assault? Fellow future UFC Hall of Famers Severn and Frye were celebrated champions in their own right. Frye had never lost a UFC fight outside of his bout with Coleman and was an Ultimate Ultimate champion, while Severn had won every championship there was in the UFC.

Coleman had obliterated Frye and Severn, and now his next challenger was to be Smith, a mere kickboxer with an MMA record of 5-8. Even in Rings and Pancrase, two organizations that heavily limited and discouraged strikes to a grounded opponent, Smith had largely been a failure, being submitted not only by much smaller, lesser grapplers than Coleman, but also by fellow kickboxer Bas Rutten. Those losses had happened not long ago, only a year or two before his bout with “The Hammer,” so the possibility of him learning new skills was slim.

Smith had earned a title shot thanks to a head kick knockout of current American Top Team head coach Marcus Silveira to win a title in Extreme Fighting, the biggest MMA rival to the UFC at the time. Smith then showed that it wasn't a fluke by defending his title with a knockout of a weaker grappler in Kazunari Murakami. Silveira was a Brazilian jiu-jitsu black belt and Murakami a judoka, though, not wrestlers. The fact that wrestler Gary Myers had taken down Silveira easily at EF 1 shows how wide the difference between Silveira and Coleman was.

Most of all, it's difficult to convey how utterly hopeless a striker-versus-wrestler matchup appeared at the time. To that point in MMA history, a striker had never beaten a decent wrestler in a major MMA match. No matter how much the commentators would hype up the possibility of a magical strike leading to a knockout, it never happened. The wrestler would always take the striker down, and they weren't getting back up. Pat Smith was a world-class kickboxer in the early to mid-90s and had arguably the most devastating pure offense in the world, even destroying Andy Hug in 19 seconds in K-1. Yet in MMA, he couldn't even beat a grappler on the level of Kimo Leopoldo, a roided-up street fighter with no formal fighting background.

Thus, people couldn't even dream up a scenario where Smith beat Coleman. They had no idea what a Smith victory would look like, because nothing like that had ever happened in MMA. There were no betting lines for the sport back then, but if I had to guess, it would probably be close to -5000 Coleman, or 50 to 1, similar to how heavily Mike Tyson was favored against Buster Douglas. When people thought of how Coleman vs. Smith would go, they pictured Coleman's destruction of Moti Horenstein, another talented striker with a losing record in MMA. Coleman would take him down and annihilate him.

For the first four minutes, that's exactly what happened. Smith was simply trying to survive, and then, out of nowhere, magic happened. Tactics that seem completely normal to modern audiences, such as Smith hip-escaping from the ground to get back up, were astonishing revelations to the audience watching UFC 14. A striker had never gotten back up against a wrestler like that before.

By the end of the night, the unbeatable golden god Mark Coleman was the one trying to survive, and Maurice Smith had pulled off one of the most inconceivable, fantastic upsets not just in MMA, but all of sports history. As bizarre and unlikely as the victory looks today, it was a hundred times so in 1997.

Let's compare that to Serra versus St. Pierre. Serra had a solidly winning record, was a highly talented grappler, and considered a very good fighter at lightweight and welterweight who simply couldn't overcome the elites at either class. He had plenty of impressive wins, such as outpointing an Yves Edwards who was one of the five best lightweights of that time—albeit at 170 pounds—as well as wins over the well-regarded Ivan Menjivar and Jeff Curran. Serra had a very competitive loss against B.J. Penn in which he won a round, a split decision loss to Din Thomas where Serra was originally announced as the winner before it was reversed by the athletic commission and, most recently, had been solidly defeated by Karo Parisyan, at that time a borderline Top 5 welterweight who was considered a very serious title contender.

His opponent, St. Pierre, was seen as a tremendously talented, deserving champion, arguably the best of the new generation of MMA fighters, but not unbeatable. He had, after all, been submitted by Matt Hughes via armbar in his first challenge for the welterweight crown, and many thought that Penn had beaten him in their first encounter, a fight which had taken place only a year prior to the Serra defense. In modern terms, it might be like Diego Ferreira taking on Kamaru Usman.

However, there was at least some conceivable way that Serra could win. Serra was considered to have the better pure jiu-jitsu, so perhaps a submission, since St. Pierre had lost by tapout once before? It should be noted that wins by submission in the UFC were far more common back then. Serra had also been working a lot on his boxing and even recorded his first knockout on the “TUF” season he won to get a crack at the champion, stopping Pete Spratt in the first round, so maybe a perfect punch? Obviously, this all seemed highly unlikely, but at least you could picture it in your head and think back to previous MMA fights that ended similarly.

When Serra knocked out St. Pierre to win the welterweight championship, it was shocking in the sense that no one thought that Serra had that kind of punching power or could overcome a seemingly superior kickboxer in St. Pierre. However, it wasn't the least bit shocking in terms of the art of MMA itself. There wasn't anything we had never seen before, as there had been with Smith and Coleman. We had seen other fighters get caught with a punch and then knocked out. It was only surprising that it happened to St. Pierre against Serra. While an enormous upset for its era, it's not even in the same league of Smith's win over Coleman, an upset that, given the sport's development, will likely never be matched.
« Previous Ryan Hall-Ricardo Lamas Featherweight Pairing Rebooked on Aug. 29 UFC Card Next The Fight for Global Supremacy »