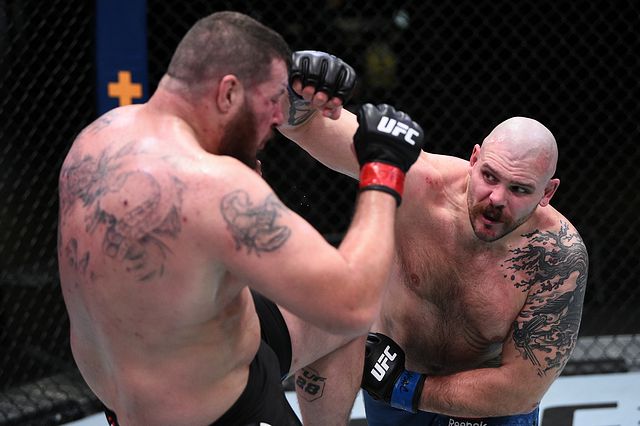 Early Friday morning, just one day before UFC on ESPN 18, the main event was canceled when Curtis Blaydes tested positive for COVID-19. Less than a day later, next week's main event, Kevin Holland vs. Jack Hermansson, was off when Holland tested positive. Going back to last week's card, the scheduled main event for UFC 255, Cody Garbrandt vs. Deiveson Figueiredo, was scrapped when Garbrandt suffered an injury in training camp. Oh, and one week before that, the fight card's planned main event, Rafael dos Anjos vs. Islam Makhachev, never came to fruition, either, and was only partially saved by Paul Felder's last-second heroics. So that's four Ultimate Fighting Championship events in a row—one a pay-per-view—in which the originally planned main event never happened. Normally, this wouldn't be such a big deal, but with the UFC opting for an increasingly boxing-inspired approach to their cards, it is.

Let's back up for a moment. UFC President Dana White is, at heart, a boxing enthusiast. He was originally a boxercise coach in Boston, and if not for a childhood friendship with the Fertittas, that's where he might be to this day. His eyes have always gleamed at promoting world-class boxing, a prospect he has discussed intermittently for almost 20 years, and he is always quick to give his views on rival boxing promoters or the champions of the day. Now, don't confuse any of this with actual knowledge of the sport. Dana White's appreciation of boxing is similar to his tastes in MMA, preferring two pugilists slugging it out with wild haymakers like two drunks at the local bar, defense and even technique be damned. And his understanding is similarly terrible, like when he stated that Andy Ruiz Jr.'s main skill is his devastating punching power. That's a hot take on par with the most casual and ill-informed of fans.

Still, it's a sport that the UFC’s head honcho has always looked at wistfully. And over the years, consciously or not, he has adopted a fight card mirroring that of boxing more and more closely. As I mentioned in a past article, UFC cards in the early 2000s, back when there were only six in a year with eight fights per event, were stacked top to bottom with championship bouts, clashes between top contenders, and dynamite young prospects, even on the then untelevised prelims. This was by necessity, as the Zuffa-owned UFC was bleeding money from 2000 until 2005 and the success of “The Ultimate Fighter,” so it had to offer up its very best each time out. Thus, there was a very clear contrast between a typical UFC and boxing pay-per-view. The latter would have a great main event, a decent if unexceptional co-main, and the rest of the card would be largely forgettable. Not so with the UFC, where virtually every fight was significant. This was a huge appeal of the sport to many fans at that time, myself included.

However, as the UFC became more successful over the years and increased its yearly number of events, the level of quality dipped considerably. And this can't solely be blamed on the pandemic, either. UFC 243 was a fine example, with a tremendous main event title bout between Robert Whittaker and Israel Adesanya, arguably the two best middleweights on the planet, a solid but unspectacular co-main in Al Iaquinta, then seventh in the lightweight rankings, facing Dan Hooker, who was 16th, and the rest of the card being largely irrelevant, with Jake Matthews being the only prospect of note.

Now, there is much to be said for this approach! It's no accident that it's been around for so long in boxing. Most fans, especially of the more casual variety, only care about the top-billed names on the card. They would greatly prefer a huge main event and 10 fights better suited to Legacy Fighting Alliance than a weaker main event paired with 10 better quality fights underneath it. And to a degree, this makes sense. Casual fans care about who the best in the world is, but they're less likely to care about the difference between the 20th and 50th best. It's not a foolproof approach, since longtime MMA viewers have been conditioned to expect a strong main card more than boxing fans, but that very same UFC 243 did well enough, garnering a good $5.5 million gate and a likely solid buy rate. Incidentally, the prelims garnered the second lowest ratings of the year, but that's less important than the other two markers.

However, this approach has a major drawback: namely, that losing a single fighter from the main event can ruin the entire card. And during the pandemic, when a single positive COVID test can do precisely that, it's especially glaring.

This can be easily corrected, of course. Book more high-quality fights on the card so that losing a single fighter isn't as damaging. Make it pandemic-proof, if you will. However, I understand why the UFC is reticent to do this. The promotion already missed a chunk of scheduled events earlier in the year, and wants to fulfill its contract with ESPN. The UFC is currently on track to hit the same number of events—41—that it had planned before the shutdowns, which means stretching its roster very thin per card. Holding fewer events would certainly mean less money from ESPN. And while regular readers will know how much I love to ridicule White, there is a good chance this wasn't even his decision, but that of the WME executives.

And yet, I think the UFC should have tried to hold fewer events, anyways, or else shell out more money to better fighters presently outside the UFC. Whatever it would take to bolster these cards. It would mean less profit in the short-term, but I can't imagine that the weak, lackluster UFC 255 PPV or last week's main card featuring Josh Parisian battling Parker Porter, two severely overweight men throwing sloppy, untechnical punches and gasping for air after four minutes, is good for the UFC brand long-term. The UFC is supposed to be the best fighting organization in the world, and while that is still true at the very top, it's increasingly dubious on a per-fight basis.

That's also a concern that boxing doesn't have to worry about with its approach to cards. No one watches an event just because it's promoted by Golden Boy or Matchroom Boxing the way they watch for the UFC or Bellator. The UFC would be wise to recognize these differences, especially in the pandemic era, and stop aping a sport it once bragged about leaving in the dust.