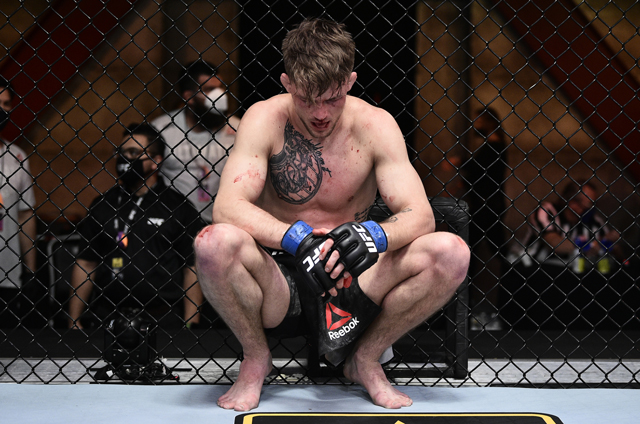 Max Rohskopf's unsuccessful promotional debut against Austin Hubbard at UFC on ESPN 11 received a lot of attention thanks to his corner, Brazilian jiu-jitsu legend Robert Drysdale, trying to convince him to go back out for Round 3 despite Rohskopf’s pleas to stop the fight. The match was ultimately called off by referee Mark Smith, but there was plenty of condemnation for Drysdale online.

However, for me the bout was notable for an entirely different reason: namely, that Max Rohskopf was a perfect example of a MMA bully, and how thoroughly Hubbard exposed him. Coming into his UFC debut, Rohskopf had been a borderline Top 20 collegiate wrestler nationally at North Carolina State before finding further success in submission grappling. He never reached the pinnacle in either sport, but he dominated a lot of guys and was only 23 when he turned pro in MMA. There, he decimated his first five opponents, finishing all of them, and only his first victim surviving to the second stanza.

Watching these matches, Rohskopf blows through opponents on a purely physical level, being much stronger and faster, and then doing anything he wants to them on the ground, with little resistance. At no point is there any risk to himself. He just smashes these guys. Talented prospects destroying weaker foes early in their career is nothing new. However, every such fighter is faced with a choice. Either they can remain humble and grounded and realize that as they go up against increasingly good opponents, matches will become longer and tougher, or they can adopt a childish, bully mindset, with the expectation that they will stomp through anyone in their path with minimal resistance en route to becoming an undefeated world champion.

Rohskopf chose the latter, and in a big way. When Joe Solecki was injured, he stepped in on just six days' notice to face Austin Hubbard. Fighting on such short notice is usually a bad idea at the best of times. One can't even cut weight properly in less than a week. But it was especially poor for Max, who was facing a skilled former Legacy Fighting Alliance champion that was light-years ahead of anyone he had previously encountered. Moreover, Hubbard had lasted three hard rounds against Mark O. Madsen, even winning the final period against an Olympic silver medalist who was a much better wrestler than Rohskopf as well as a better, more complete mixed martial artist with a full training camp.

Did any of this deter Rohskopf? Absolutely not. In an interview conducted less than two months prior, he laughed off the suggestion that he might not be adequately prepared for a short-notice fight. In that interview, he states that a week is no problem; he could easily make weight in two days. (Naturally, after he lost, Rohskopf's manager blamed the loss on the short-notice weight cut.)

Moreover, Rohskopf announced that he was ready to face a Top 5 foe “right now,” and that “some dudes in the Top 10 I would make look easy”. He even went one step further, claiming that he had sparred against some of the same Russian and Dagestani martial artists as UFC lightweight champion Khabib Nurmagomedov and that the champ's manager, Ali Abdelaziz, “had to pull me off.” Those victimized fighters “had never even felt anything like I have” to offer. Clearly, Rohskopf was on a different level than Nurmagomedov himself.

Rohskopf boasted that he wanted to immediately jump in “against a borderline ranked opponent” and salivated at the thought of his “50k bonus.” In his mind, he had already won the fight in scintillating fashion. It was natural that he would dominate and destroy anyone in front of him. He provided an excellent illustration of the bully mindset.

Only Hubbard didn't feel like going along with the script, and had different plans. While very far from the Top 5 and possibly not even in the world's Top 50, he was a solid, skilled opponent who wasn't going to go away after the first takedown. Sure enough, after Rohskopf had some early grappling success, he came across something entirely new to him in the sport—some real resistance. Hubbard managed to scramble back up and easily evaded Rohskopf’s submission attempts. He was stronger, faster, and more technical than anyone Rohskopf had fought, and suddenly, his go-to strategy wasn't working.

After that, Rohskopf experienced another first in a MMA fight: adversity. By the end of the round, he was already being pelted with strikes, something that he had avoided for his first five pro outings. Mentally, he was already beaten at this stage. With his envisioned easy victory shattered, and experiencing doubt and adversity for the first time, he crumbled. Rohskopf came out like a zombie in Round 2, passively covering up as Hubbard beat him up, landing strikes at will.

It was little surprise that Max gave up after Round 2. It might have seemed unusual to Drysdale, but the coach never had a bully's mindset in either MMA or BJJ. He still thought Rohskopf could get a takedown and pull off a miracle submission in Round 3. But for his charge, it was all over. There was no fight left in him.

Nor is Max a unique example. Consider Sanford Alton Meeks, who faced Yorgan De Castro on Dana White's Contender Series in June. Listening to Meeks talk, you could tell he was used to dominating guys physically all his life, whether in high school wrestling, college football or Greco-Roman wrestling, where he was a U.S. national team alternate.

In the interview airing right before his fight against de Castro, Meeks predicted that “I've never had a fight last longer than two minutes, and that's about what I expect.” This was no mere braggadocio; he really meant it and hadn't planned for anything longer. And why not? De Castro was a full-time teacher and part-time fighter who had a losing amateur record and was a small, pudgy heavyweight that could likely make middleweight with the right diet. Oddsmakers and bettors agreed, with Meeks closing as a monster -1000 favorite.

Only no one bothered to inform de Castro. While his small opponent wasn't as big or strong, he was a lot more skilled and agile than the journeymen on whom Meeks had been feasting. Meeks had trouble securing a takedown and once he did, de Castro wall-walked and posted right back up. The magic two-minute mark came and went. After that, the Cape Verde native punished the bully with leg kicks, a strike that inexperienced wrestlers struggle with avoiding or defending. (Watch Pedro Rizzo vs. Dan Severn from back in the day.)

Sure enough, facing the prospect of a tough, painful battle, and already tired, Meeks collapsed, covering up and wanting out at the end of Round 1. He hadn't attained a win inside of two minutes, and after less than five, he was done. Once de Castro stood up to the bully and showed enough resistance, there was surprisingly little left.

Mixed martial arts is a cruel, difficult sport. No matter how physically gifted one is, they have to be ready for a grueling fight that will take them to the absolute limits. A moment's loss of concentration can mean crushing defeat for the greatest fighter. There are always opponents who are strong, fast, and skilled, and refuse to succumb quietly. At a sufficiently high level, they're the norm.

Even athletic phenoms like Yoel Romero, Georges St. Pierre and Nurmagomedov have frequently had to battle through adversity and the highest levels of resistance. None of them have given in to the easy mindset of the bully, despite how far their pure physical talents would have taken them. It's a lesson prospects would do well to heed, but as long as there are talented, arrogant young men and women in MMA, there will be bullies, and they will continue being exposed.