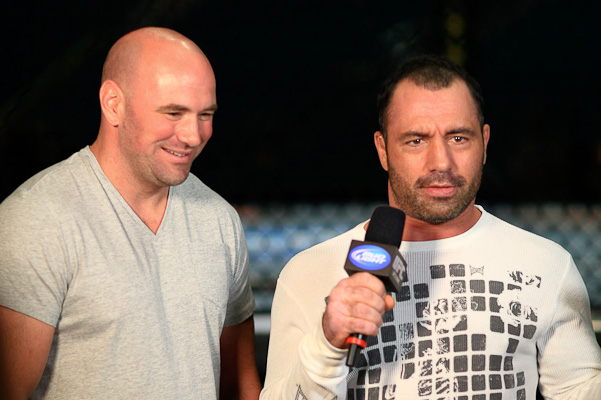 When I think of biased commentary in the Ultimate Fighting Championship, two recent examples come to mind: one being color commentator Joe Rogan's complaints about Khabib Nurmagomedov in his championship-winning performance against Al Iaquinta at UFC 223 and the other being Rogan and play-by-play commentator Anik's shameless cheerleading and praise for Felicia Spencer’s performance against the exiting Cristiane Justino at UFC 240.

Both are really bad. In the first, Rogan was constantly grousing about Nurmagomedov's lack of stand-up while he was not only displaying the best striking of his career, but soundly beating Iaquinta—a top-10 fighter largely thanks to his kickboxing—on the feet. Was Nurmagomedov's striking world-class, on par with the best of the UFC? No. Did his stand-up success against Iaquinta owe a debt to Ragin’ Al's fear of the takedown? Certainly. But Nurmagomedov showed good, technical striking that was far better than what most other UFC fighters display. Considering how fantastic his wrestling is, that's an achievement deserving of respect, not derision. Not only did Rogan's commentary take away from Nurmagomedov's historic victory, but it was downright ignorant.

Spencer-“Cyborg” was a fight that saw the Canadian bravely fight to the bitter end and even open up a cut on her legendary opponent early in the fight, but it was still dominated by the Brazilian, who repeatedly battered Spencer with strikes and had referee Yves Lavigne leaning in, ready to stop the fight at least half a dozen times.

You would never have guess that by the commentary. Rogan and Anik constantly praised and complimented Spencer, the fighter being badly beaten, while criticizing and downgrading anything “Cyborg” did. At some point, the bias approached parody, with Rogan and Anik gushing over how awesome Spencer was for being hurt with a barrage of clean strikes from Justino. While heart and toughness deserve to be pointed out, it's not as important as the fighter beating the stuffing out of their opponent. Yet, Spencer's grit was the main focus of the two commentators, when they weren't pretending the fight was much closer than it really was or that “Cyborg” was secretly in trouble. It reminds me of the old joke about how a fighter ruthlessly beat up his opponent's hands with his face.

In a wild coincidence that I'm sure has nothing to do with Rogan and Anik's embarrassing commentary, “Cyborg” was on the last fight of her contract and in the midst of a very public, acrimonious split with UFC head honcho Dana White, who had no intention of re-signing her and wanted to reduce her market value. Meanwhile, Spencer was a young, photogenic fighter the UFC was looking to promote. Again, totally unrelated.

However, neither Spencer-“Cyborg” nor Nurmagomedov-Iaquinta features the most biased commentary in UFC history. One would have to go back many years to the main event of UFC 37.5, which was called by a young color guy named... Joe Rogan.

For those who haven't seen it, Chuck Liddell vs. Vitor Belfort was a genuinely great battle that I encourage everyone to watch. It was a tremendous contest between two of the best strikers in the world at the time, yet wasn't merely a fantastic stand-up duel, but also features some fine grappling exchanges, pitting Belfort's Brazilian jiu-jitsu against Liddell's wrestling and excellent use of wall-walking, a technique he pioneered.

Round 1 was clearly won by Belfort. Round 2 was close, with Liddell landing more strikes but Belfort having the hardest connect of the stanza, and Round 3 was also close right up until Liddell landed a gorgeous right hook counter that knocked Belfort down on his butt, an iconic highlight which is most people's dominant memory of the encounter.

However, that classic was partly spoiled by the painfully biased judging and commentary that was even worse. Two of the judges scored the fight 30-27 Liddell, and only one of them was Cecil Peoples. There is literally no way that Liddell won the opening stanza by any criteria. To use a recent example, Robert Whittaker has as good a claim to winning Round 1 against Darren Till as Liddell had to winning that round.

If such judging happened in a UFC main event now, there would be massive controversy and possibly even an investigation. Luckily for the UFC, 37.5 occurred in 2002, long before social media, in front of a relatively small live crowd of 3,700 and with a pay-per-view buy rate of less than 30,000.

Yet Rogan had the 30-27 scorecards beat when it came to comical levels of bias. He consistently cheered and overhyped everything that Liddell did while dismissing anything by Belfort. He claimed that Belfort was hopelessly outmatched and Liddell had him completely beaten in every area. Here are a few highlights, with the action contrasted with Rogan's presentation:

1. Early in round 3, Liddell scores a solid right cross to Belfort's face that causes Belfort to back up slightly.

2. A few seconds later, Belfort lands a left cross that snaps Chuck's head back and is significantly harder than what Chuck just hit him with.

Rogan: “That leg kick was very defensive! He kicked and then he moved away.”

4. Belfort lands a head kick at the end of Round 2.

Rogan: “That to me tells me that Vitor is TIRED! He's not in the best shape he can be in and is conserving his energy.”

Rogan also gushed incessantly over a spinning back-kick Liddell threw in Round 2 that looked pretty but landed on the side of Belfort's chest, causing minimal damage. This occurs at 2:17 of the round, and Rogan yells "VERY NICE! VERY NICE!" like a man possessed, then mentions it again and again throughout the round, including at its conclusion. Just seven seconds later, Belfort landed the best strike of the round, a gorgeous straight left at 2:10 that had Liddell momentarily stunned and backing up. Rogan's only response? "Liddell has a HELL of a chin!" Beyond that, he completely ignored the punch, never mentioning it again.

The most ridiculous commentary moment of the fight came in Round 1, though. After Belfort had taken Liddell down multiple times—despite some blatant fence-grabbing by Liddell that referee “Big” John McCarthy slapped away—and landed some ground-and-pound, Liddell eventually got up thanks to the aforementioned wall-walking.

As soon as Liddell got up, before landing any strikes, with Belfort way ahead in the round, Joe exclaimed, "Liddell is taking over this fight!"

My guess for this shameless cheerleading? Liddell-Belfort was billed as a No. 1 contender's match to set up the next challenger to Tito Ortiz's light heavyweight championship. It's surreal to see Ortiz passionately cheering for Liddell in the stands, and then hear Liddell refer to his future nemesis as a close friend in the post-fight interview. Dana White at the time was not only the president of the UFC, but Liddell's manager and close personal friend, a comically corrupt conflict of interest. White clearly wanted Liddell to win to set up the title fight with Ortiz, with whom White had had a recent falling out, and apparently told Rogan to massively hype up Liddell and oversell everything he did.

I guess one shouldn't be surprised Rogan was responsible for this though, as Liddell-Belfort was a combination of the horrible elements of the two more modern fights, all magnified to the extreme.