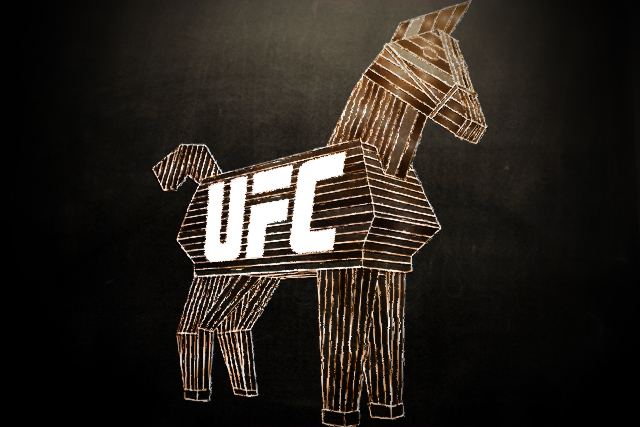 
The ordering process for Ultimate Fighting Championship pay-per-views has changed: UFC 241 is only available on ESPN+ in the U.S.

UFC President Dana White has confirmed that “The Ultimate Fighter” -- the Ultimate Fighting Championship’s long-running reality series -- would return to airwaves in the near future. In a press scrum following Episode 7 of Dana White’s Contender Series, he praised the program as a vital tool for developing contenders and claimed it at a future for as long as he leads the organization:

“We’re going to switch some things around, do some things different, but I truly believe that ‘The Ultimate Fighter’ is so key in building young talent. This show is fun and guys come in, but what they have to go through with cameras in their face 24/7, being away from home, being away from their families and all the bulls----, hardcore training everyday with these dream camps that are [expletive] built, cutting weight, staying on weight … you’ll never go through anything harder than ‘The Ultimate Fighter.’ It’s a big deal. When you come off ‘The Ultimate Fighter,’ everybody knows who the hell you are immediately. When we just left Fox, the thing was still pulling big numbers. It was the highest-rated show for original programming on Fox the entire seven years we were there.”

Despite White’s insistence that “The Ultimate Fighter” still pulls “big numbers” on television -- an assertion that’s so patently false that reporters have stopped attempting to call him on it -- the news has been met with predictable apathy from fans and media. With 28 seasons over 15 years, not including international spinoffs, liters of ink have been spilled on opinion columns and forums advocating for the program to be euthanized. Citing consistently shrinking audiences, a tired format, a diluted talent pool, the dubious benefits of the team system in an era of super camps and a vastly more engaging alternative in the Contender Series, the prevailing opinion among commentators and hardcore fans is that it’s time to let “The Ultimate Fighter” go the way of pyrotechnic fighter-walkouts and Mike Goldberg.

However, these arguments, while absolutely correct in highlighting the limited appeal the reality show has for television viewers, ignore its enduring utility as an institution geared towards monopolizing the market for prospects and -- more instrumentally -- preaching the virtues of the UFC brand to its future workforce. Even while the number of fans and media who care about, much less watch or keep up with, “The Ultimate Fighter” has dropped precipitously, the aspiration of many prospects remains to get to the UFC via the TUF House. Although the depth of talent isn’t what it was back in the early seasons -- when multiple contestants went on to challenge for UFC titles -- legitimate and marketable fighters still show up to tryouts and enter the house. Once inside, the UFC exerts unfettered power to mold them into tractable and affordable foot soldiers, all the while extracting valuable intellectual property for their ancillary programming.

While only two fighters per season make it to the finale and win the “six-figure contract” outright, the UFC still has options on all “Ultimate Fighter” competitors, and with a punishing and increasingly oversaturated event schedule, having a surplus of cheap labor to insert on the prelims at the 11th hour is absolutely key to the UFC’s business. Not unlike the Burns-Omni-Net, “The Ultimate Fighter” sweeps the sea of viable prospects, locking down young up-and-comers at rock-bottom prices.

The scene of White playing drill sergeant in front of a group of assembled killers, proselytizing about the land of boundless opportunity that awaits them if they make it through the house, is also key to propagating and legitimating a promotion that takes 85 percent of revenue while its fighters on the poverty line are designated “washouts” who just weren’t good enough. Of course, hearing a man worth more an estimated $700 million pat himself on the back for awarding a $12,000 guaranteed contract and the occasional $50,000 bonus seems absurd to anyone even remotely aware of how the UFC makes its money (hint: from the fighters). Still, contestants in the TUF House make a remarkably receptive audience. That tends to happen when you’ve bet all your chickens on making it big in a reality TV show and the guy that might just make the gamble worth it is expecting you to validate his speech about the emancipatory nature of his company. That dynamic -- where an aspirational labor force meets an organizational structure purpose-built to extract the maximum amount of value out of its athletes at the lowest possible print point -- is central to the UFC’s hegemony as a cultural institution and financial juggernaut.

At its best, “The Ultimate Fighter” provided the uninitiated sports fan with a portal into the lives and aspirations of young MMA fighters. It ironed out misconceptions about the men and women who plied their trade in a steel cage and showed a side of the sport that wasn’t transferrable in an event broadcast or a 40-minute episode of “Countdown.” It was an educational tool, an incubator for talent and an entertainment product that delivered ratings to the TV execs and star power to the athletes. There is a very good argument that none of these descriptors apply any longer when the program is viewed in a vacuum. However, to ask why the program hasn’t been axed would be to miss its central purpose as an economic and cultural tool to make the supply side of the market for fighters more pliable and thus easier to exploit.

So what do we make of White saying that “The Ultimate Fighter” isn’t going anywhere? It’s more than just “Face the Pain”-inspired nostalgia. It’s the marrow of the UFC’s business model.

Jacob Debets is a law graduate and writer from Melbourne, Australia. He is currently writing a book analyzing the economics and politics of the MMA industry. You can view more of his writing at jacobdebets.com.