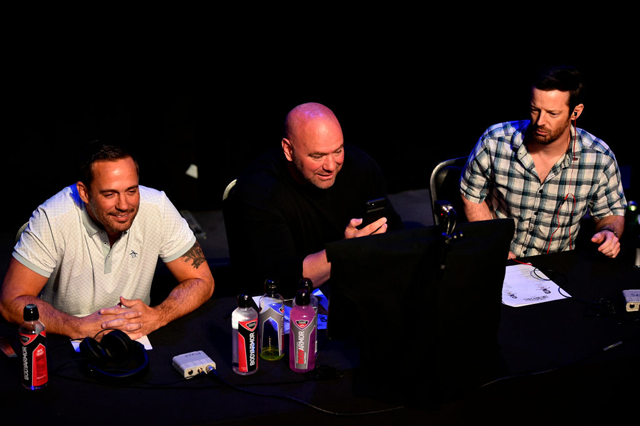 Anyone who has read my columns has likely figured out that I don't like Dana White. Sure, there is a lot of appeal in a cocky, foul-mouthed, younger man who seems like a dude you can have a beer with at the local bar, in sharp contrast to the stuffy, stilted, older heads of other sports leagues. Unfortunately, the Ultimate Fighting Championship president never learned to draw the line with that behavior, especially in his dealings with fighters, and over the years, he started to buy into his own PR hype. However, this article isn't about White, at least not directly, because for a long time, his failings as the UFC president really didn't matter. How can that be, one may wonder?

Firstly, as White himself even acknowledges, the real brains behind most of the UFC's rise was Lorenzo Fertitta. Fertitta had a deep understanding of the sport and a true talent for growing it, as well as a number of connections to the Nevada State Athletic Commission, of which he was a member when it told the UFC—then owned by Semaphore Entertainment Group and Bob Meyrowitz—that it wouldn't sanction the sport. The NSAC then magically approved mixed martial arts when Fertitta quit the board and bought the UFC from Meyrowitz a few months later, all without a single rule change, a fascinating story in its own right.

Regardless of the highly unique manner in which Fertitta acquired the UFC alongside his brother Frank III, he was certainly excellent in running it. It was he who made the final decision to do “The Ultimate Fighter” reality show and it was he who was responsible for their branding, presentation, financial deals, etc. Unlike White, however, he had no desire to be the public face of the company and receive glowing praise. He preferred to work in the background, like most truly successful businessmen do. If one doubts this, compare how the UFC grew and flourished from 2000 to 2016 under Lorenzo's leadership versus how it has done since, when the Fertittas sold the company to WME-IMG.

However, Fertitta was not the only major figure that made White's shortcomings largely irrelevant. The other was matchmaker Joe Silva. While a number of former and current UFC fighters, from Eddie Alvarez to Gray Maynard, have detailed poor experiences with Silva, such as his penny-pinching, threats, and generally scummy behavior, that shouldn't detract from the main point. The man was an absolute genius at what he did. An average matchmaker might set up contests where, if one guy wins, it's good for the promotion, but if the other guy does, it's bad. Silva, however, regularly set up win-win scenarios. Regardless of who won, it would benefit the UFC and set up more intriguing contests that would do big business. And this was true whether one was talking about the main events of pay-per-views or the earliest prelims of fight nights.

Unfortunately, Joe Silva decided to retire in 2016, the same year the Fertittas sold the company, and in his stead, Dana White decided to promote Sean Shelby and Mick Maynard, two individuals whose chief qualifications appear to be that Dana likes hanging out with them. Or, as I like to call them, Tweedle-Dee and Tweedle-Dum. Rather than booking win-win scenarios, or even win-loss scenarios, the duo have mastered the art of loss-loss scenarios. This has severely hampered the UFC's production of new stars and in turn, their ability to make big fights that capture the public's interest and generate money.

One of the most colossally dumb blunders that Dee and Dum were responsible for is booking the rematch between Francis Ngannou and Curtis Blaydes in November 2018 in Beijing. Let's recall the status of both fighters at the time. Blaydes had just come off an awesome, vicious ground-and-pound knockout of Alistair Overeem. Riding a five-fight winning streak, he was considered next in line for a title shot, with then-champion Daniel Cormier even specifically mentioning Blaydes how impressed he was by him.

On the flipside, Ngannou had lost two fights in a row, having been dominated by Stipe Miocic when he challenged for the title, and then producing one of the worst, most boring fights in UFC history against Derrick Lewis, which he lost despite being a heavy favorite. It's hard to believe now, but his stock as a fighter was very low and he was far from a title shot, with many remarking he would never recover from the Miocic loss, especially mentally. Despite Ngannou having won their first fight convincingly and seemingly showing a definitive stylistic advantage, Blaydes was a considerable -250 favorite.

Let's imagine for a moment that Blaydes would have triumphed. The victory would have done absolutely nothing for him, as it would be seen as nothing more than a victory over a flawed, overrated, ruined fighter in Ngannou. His status as a top contender would be unchanged. Meanwhile, it would have largely killed Ngannou as a serious contender, with him having lost three fights in a row.

Instead, Ngannou knocked out Blaydes in under a minute. What did this do for both fighters? Blaydes fell considerably in everyone's estimation, and suddenly found himself very far from a title shot. Despite an impressive four-fight win streak since that encounter, including victories over top contenders like Junior dos Santos and Alexander Volkov, he is still on the outside looking in when it comes to a title shot.

Did the victory do much for Ngannou? Actually, no. It was seen as nothing more than Ngannou defeating a man against whom he had a very good stylistic advantage, and not any kind of proof that he was back and better than ever. Consider that for Ngannou's next fight, against a Cain Velasquez making an ill-fated comeback attempt, he was an even bigger underdog than he was against Blaydes. It was only after lightning-fast knockouts of Velasquez, another legend in Junior dos Santos and Jairzinho Rozenstruik—which we will get to later—that Ngannou is back in the title picture in a big way.

Thus, in both scenarios, the match did more harm than good when it comes to building new stars and big matches. If the UFC had never booked this fight, it would have probably had two stars and championship contenders in Blaydes and Ngannou. Blaydes would be seen as a perfectly credible champion should he defeat Miocic and a rematch between Blaydes and Ngannou would be the main event of a PPV, doing big business, rather than being the main event of a weaker Fight Night card. Now, it will be hard to take Blaydes seriously as a champion given his two decisive knockout losses to Ngannou, and there is little interest in a third match between them.

The UFC partially killed the popularity and status of a great fighter like Blaydes through sheer ineptitude. Shelby and Maynard arguably cost the UFC millions of dollars. Incredibly, as if to prove the saying that an idiot never learns from his mistakes, Tweedle-Dee and Tweedle-Dum made an almost identical blunder more recently. I'm talking about Ngannou against Jairzinho Rozenstruik.

Yet again, you have two excellent, highly regarded contenders with a slew of impressive knockout wins. Why in the world would you have them fight one another, necessarily hurting the stock of one of them? Why not keep Rozenstruik away from a fellow killer in Ngannou and have him continue to rack up impressive victories against older greats, like his very next opponent, Dos Santos? And why would you risk Ngannou's status as a scary contender against another outstanding striker with a titanium chin and monstrous power who could absolutely defeat him?

Yes, Ngannou finished Rozenstruik in 20 seconds, but that's not the point. There was risk involved, and for what? Ngannou isn't considered significantly better than he was before the win, but the previously unbeaten Rozenstruik lost a lot of status, to the point where he was almost even money against a Dos Santos clearly in decline. Yet again, the effect of this is that Rozenstruik will be hard to take seriously as a champion, and an Ngannou vs. Rozenstruik match that could have been huge was instead wasted as the third billed fight on a PPV, not even gracing the front of the main poster. And while I think Rozenstruik would have a chance, good luck selling a rematch as an intriguing battle to most fans.

Of course, the incompetence of Shelby and Maynard doesn't absolve Dana White. He is the one who hired and promoted them, which is an underrated aspect of a sports president's role. It's not just one's individual decisions, but the people one hires. And in this case, he could scarcely have chosen worse.
« Previous Dana White’s Contender Series Weigh-in Results: All Fighters Hit Contracted Marks Next Ex-UFC Title Challenger Ricardo Lamas Finalizes Decision to Retire at 38 »