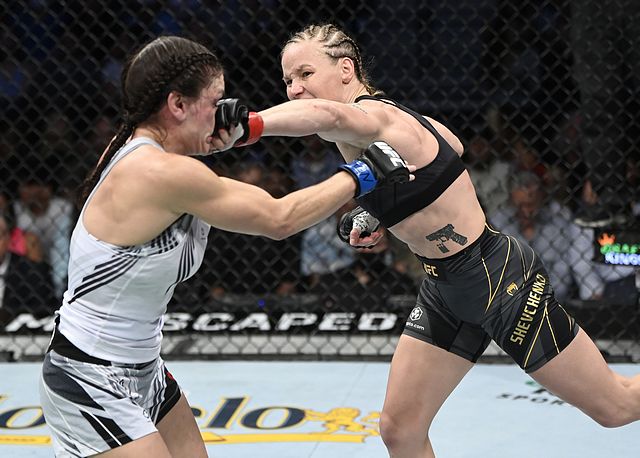 Sign up for ESPN+ right here, and you can then stream the UFC, PFL, Dana White’s Contender Series and “The Ultimate Fighter” live on your smart TV, computer, phone, tablet or streaming device via the ESPN app.

“Lucky” Lauren Murphy lived up to her nickname at UFC 266. The card featured three bouts in her weight class, and I would rank Murphy as the fifth-best among those six female flyweights. Yet it was Murphy challenging the great Valentina Shevchenko for the 125-pound crown in the co-main event. Part of this was due to Shevchenko’s brutal dominance, having crushed the second-best flyweight on the card, Jessica Andrade, in her most recent outing. While I consider them superior fighters to Murphy, it is perfectly logical why neither Cynthia Calvillo nor Taila Santos have received cracks at the belt. However, I can’t think of a single title challenger in Ultimate Fighting Championship history who was outshined by so many fellow contenders at the same event. How did Murphy obtain this singular opportunity?

After being dominated by “The Ultimate Fighter” Season 26 rival Sijara Eubanks—she took all three rounds—in 2018, Murphy embarked on a five-fight winning streak. While that sounds impressive on paper, a closer inspection reveals several large qualifiers. To begin with, Murphy’s “win” against Andrea Lee in front of a hometown Houston crowd at UFC 247 ranks as one of the worst robberies I’ve seen in 26 years of watching MMA. Not only did 100% of MMA journalists and 93% of fans have it for Lee, but the most common scorecard, one that I share, was a 30-27 sweep. Regular UFC judge Chris Lee scored it for Lee, but local, seldom-used judges Patrick Patlan and Danny Dealejandro—he struck a putrid 30-27 scorecard for Murphy—gave it to the local fighter. This was also the infamous match in which commentator Dominick Cruz noted that a judge was looking down at his phone for much of the third round.

While not nearly as egregious, Murphy’s most recent victory over Joanne Calderwood was a very close battle that a slight majority of MMA journalists and 75% of fans scored for Calderwood. In other words, Murphy’s five-fight winning streak could very easily have seen her go 3-2. Among Murphy’s three uncontroversial triumphs, she had a solid and respectable win over tough veteran Roxanne Modafferi. She also scored a knockout win over Mara Romero Borella, which was nice at the time but has since lost its luster. While a capable wrestler, Borella has one of the worst chins in UFC history and awful submission defense. Including the Murphy loss, Borella has now dropped four fights in a row—three of them stoppages and the other a one-sided 15-minute beating administered by Montana De La Rosa—and finds herself out of the UFC. Murphy also had a submission win over Liliya Shakirova, a late replacement and limited fighter who was additionally dwarfed by Murphy. A huge 125-pounder who fought most of her career at 135 pounds, Murphy looked two weight classes bigger than Shakirova, who might have even been small fighting at 115 pounds.

Thus, Murphy, a tough, resilient veteran who I nevertheless wouldn’t rank among the world’s 10 best women’s flyweights—especially if one includes Bellator MMA’s division—got a title opportunity against a great, dominant champion in Shevchenko.

This also got me thinking: What are other examples of unlikely UFC title challengers, the MMA equivalents of Chuck Wepner, the inspiration behind Rocky Balboa?

One immediate example that comes to mind is Elvis Sinosic. While a pioneer of MMA in Australia and an all-around cool guy, the reality is that Sinosic was not an elite fighter. He ended his career with a record of 7-12-2 and featured very poor, barely existent striking and mediocre wrestling; and while he relied on his Brazilian jiu-jitsu, he could be beaten and submitted by the best in that discipline. Yet at UFC 32, with a .500 record of 4-4-1, he challenged one of the best pound-for-pound fighters in the sport, Tito Ortiz, for the light heavyweight championship in the main event. Ortiz made short work of his opponent, decimating him with ground-and-pound and prompting a stoppage halfway through the first round. How did Sinosic attain this opportunity? In his previous UFC appearance, he had submitted Jeremy Horn in the first round in what was by far the biggest victory of his career. In fact, it is his one and only win in the UFC, as he would lose five more times in the organization after the Ortiz fight, leaving his promotional record at an unenviable 1-6. Interestingly, there was one other light heavyweight fight at UFC 32 between Vladimir Matyushenko (he would challenge and lose to Ortiz one event later) and Yuki Kondo (he had already challenged and lost to Ortiz), both of whom were unquestionably superior to Sinosic.

There was a lot of justified criticism towards Chael Sonnen challenging Jon Jones in the UFC 159 main event in 2013. Sonnen was still a notable contender at middleweight, as his last four outings there saw his victories over Brian Stan Michael Bisping sandwiched between memorable losses to longtime champion Anderson Silva. Even so, why was he jumping the line for a shot at the 205-pound throne? The last time Sonnen had even fought as a light heavyweight in the UFC was all the way back in 2005, when he faced Renato Sobral at UFC 55; and it was in a losing effort. Freak toe injury aside, Jones easily dispatched Sonnen in the first round. Additionally, there were two other light heavyweight fights at UFC 159, and Phil Davis and Ovince St. Preux were undoubtedly better than Sonnen. While St. Preux would later receive a title shot, Davis never did.

Interestingly, I would not include Matt Serra’s welterweight title shot at Georges St. Pierre in this list. Serra was widely considered a highly skilled Top 10 lightweight who was forced to fight at the heavier division since the UFC had shut down the 155-pounders. Even with that caveat, he had won five of his six previous outings—they included his run on Season 4 of “The Ultimate Fighter”—and did so mostly against good, solid opponents. The lone blemish was a decision loss to Karo Parisyan, a feared Top 5 welterweight at the time. There were six other welterweights on the card besides Serra and St. Pierre, and the undersized challenger was much better than at least four of them: Josh Haynes, protégé Luke Cummo, Pete Spratt (a man Serra knocked out in the first round on “The Ultimate Fighter”) and Marcus Davis. At the very least, Serra would have given tough, competitive fights to the other two 170-pounders on the bill: young versions of Josh Koscheck and Diego Sanchez.

What about you, dear readers? What examples of highly unlikely UFC title challengers come to mind?

« Previous Kevin Holland-Kyle Daukaus Rematch Set for Nov. 13 After No Contest at UFC Fight Night 193 Next By The Numbers: Mackenzie Dern vs. Marina Rodriguez »