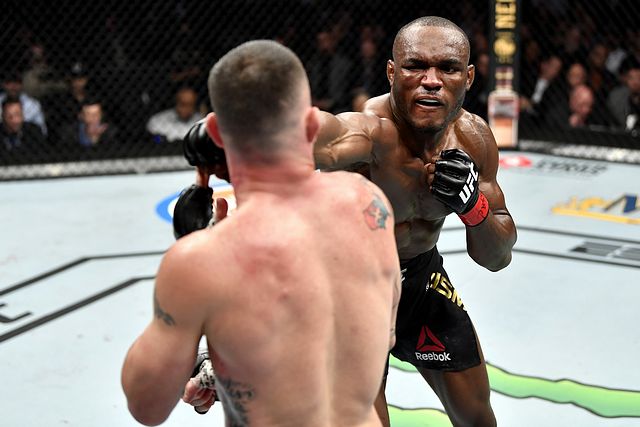 In the Ultimate Fighting Championship today, it's far more difficult for a fighter to get a title shot than to defeat the champion once they get there. In the past few years, the challenger has won roughly half of UFC title fights. While 2019 was a better year for the champions, they still were successful in just 10 of 16 contests, or 62.5 percent. Even that number counts Henry Cejudo’s defeat of the heavily favored T.J. Dillashaw at 125 as a title defense against a non-champion, and includes near misses such as that Jon Jones' split decision against an injured Thiago Santos, which would have been a loss if a single judge had seen a single round differently.

If one thinks about it, this state of affairs makes sense. After all, winning a championship is only a single fight. Nobody is unbeatable in MMA—no matter how great—and the challenger is invariably a tremendous, unique fighter in his or her own right. A far more Sisyphean task is actually getting that title shot to begin with. There are two main ways to do it:

1. Go on a long winning streak.
2. Be a crowd-pleasing fighter with many highlight reel finishes.

Notice the problem there? These two approaches are in direct opposition: To attain a long winning streak generally requires a safer fighting style, in most cases predicated heavily on grappling. That's how Kamaru Usman and Colby Covington are or were undefeated for so long. It is how Khabib Nurmagomedov has won every fight in his career, and while more of a striker, Leon Edwards also leans heavily on his own excellent wrestling, while his stand-up emphasizes movement and defense over naked aggression. Even Jones, in many of his decision victories, adopts a safer approach. Through superior grappling, and taking fewer risks in the stand-up exchanges, the chances of being caught by a strike and losing go down substantially.

And yet, if one goes down this route, one is at risk of being dismissed as “boring,” especially for a boss, Dana White, whose appreciation of fighting seems to begin and end with two brawlers wildly exchanging blows, no matter how sloppy. Recall that Covington, in the midst of his winning streak and being ranked as a top contender, claims he was threatened by the UFC with being cut, since his wrestling-based approach was seen as dull. That's also when he stopped being a normal, respectful fighter and unfurled his pro wrestling persona.

Old-school fans will also recall Matt Lindland, right after being promised a title shot against Rich Franklin when he defeated Joe Doerksen at UFC 54, being summarily cut by the UFC over a sponsor dispute. One underlying reason for this is that White hated Lindland and his wrestling style, and worried he would triumph over the more exciting, marketable Franklin, one of the faces of the UFC in the mid-2000s.

The second approach—be a crowd pleaser—is the direct opposite. It is all about ignoring grappling entirely, going toe-to-toe, taking huge risks, and receiving numerous blows to the head to land some of your own. It's a more crowd-pleasing style, and it sure makes Dana White happy. It also has the added advantage of requiring fewer victories to gain a title shot. After a first-round knockout loss to underdog Michael Johnson—the downside of this approach— Dustin Poirier needed only five straight wins in the deepest division in MMA to get a shot at Nurmagomedov. In contrast, Nurmagomedov himself, despite being arguably the most exciting grappler in the sport, needed to win nine straight in order to fight for the belt.

At 170 pounds, Jorge Masvidal has just three straight wins and was, until recently, being considered for a title shot over Edwards, who has won in a row since losing to Usman in a competitive fight in which Edwards clearly won a round. Gilbert Burns, the next welterweight title challenger, has six straight wins, but only four of those were at 170 pounds. Again, though, he has a riskier, more crowd-pleasing style. Speaking of the champion Usman, he had a long road to the top as well, needing nine straight victories, which isn't even counting his two exhibition wins on “The Ultimate Fighter.”

However, the downside of the brawling approach is that even the shorter climb to the title shot is often interrupted by a loss due to the riskier style. Consider Vicente Luque. He is supremely talented; back in early 2017, he had a very close fight against Edwards which Edwards won narrowly due to his slightly better wrestling and cardio in Round 3. After that, Luque, with his action style, reeled off six exciting wins in a row, including a fight of the year candidate against Bryan Barbarena, even if the victory over Mike Perry was awfully close. (I personally had Perry winning.)

Luque then got a big opportunity against a much higher ranked opponent, Stephen Thompson, and if he won, a title shot wouldn't be too far away. However, Thompson is a fighter who emphasizes defense and evasion far more than Luque, and isn't above point-fighting at times. Thompson triumphed easily and Luque went back down the ladder to start all over again.

Or consider Pedro Munhoz. While he is a highly talented grappler with a vicious guillotine, he prefers to stand and bang, and he is damn good at it, even knocking out former champion Cody Garbrandt. It only took Munhoz three straight wins after a split-decision loss to John Dodson to be matched against Aljamain Sterling in what was an unofficial No. 1 contender fight at the time. Yet Munhoz's exciting brawling style was repeatedly frustrated by Sterling's highly technical, brilliant, but less crowd-pleasing mix of striking and grappling.

Not surprisingly, despite being the rightful contender, Sterling was not announced as Cejudo's next challenger. Instead, he had to fight against Cory Sandhagen, who had five straight wins over mostly lower-tier opposition as well as a split decision over John Lineker that could just as easily have gone the other way. (What I like to call a “coin-flip” decision) However, Sandhagen was seen as more exciting than Sterling, so they ended up on even footing.

The cause behind this is that the UFC is largely fighting for the sake of entertainment, yet has certain pretensions and vestiges of being fighting for the sake of sport. These are incompatible goals that the promotion hasn't resolved well. This, of course, isn't even factoring in personal bias. UFC president White and matchmakers Mick Maynard and Sean Shelby seem to like certain fighters personally while others, for whatever reason, rub them the wrong way.

The aforementioned Lineker, who a slim majority of journalists and fans alike think beat Sandhagen, is out of the UFC entirely. Aside from a history of weight issues, the Brazilian never got along with White. Meanwhile, the boss can't stop gushing about Sandhagen, who was likely one victory away from a title shot before being stopped by Sterling.

What is a fighter to do in this environment? It's hard to say. In some cases, wrestlers decide to abandon their grappling entirely to engage in wild slugfests to avoid being branded as boring. That usually doesn't work well. However, observing the more successful martial artists that have managed to solve this riddle, they alter their approach every fight based on where they stand with the UFC.

Consider Israel Adesanya, who had a slew of exciting fights as he ascended the ranks and became champion. Once secure with his spot, he had no problems adopting a cautious, safety-first approach in facing the tremendously dangerous Yoel Romero, resulting in a boring and controversial fight which I and many others thought was won by the Cuban. Cue wisecracks about there being no winners. I don't blame Adesanya at all. Why take unnecessary risks when you don't have to, especially given how hard he had worked to get there? But when he was making his way up he didn't have that luxury.

Other combatants try to make a flashy, highlight-reel debut and then tone it down as they face tougher, more challenging opponents. However, regardless of approach, this will continue to be a challenging problem for fighters so long as the entertainment side so heavily dominates the sport side of MMA.