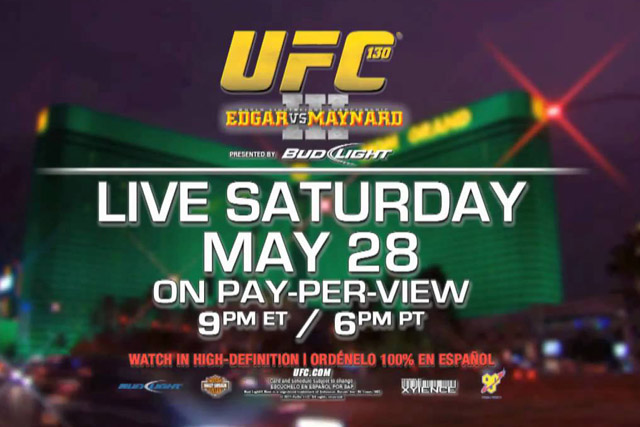 Four years is a peculiar length of time.

Four years is not a particularly brief period of time. It’s roughly five percent of your entire life, give or take a percentage point, if you’re living in the first world. It’s not especially long, either. If you told someone you did four years in prison, they might be piqued but hardly horrified; if you only got to spend four years with the truest love of your life, you’d be left dramatically unfulfilled.

Forty-eight months seldom marks an epoch, but it’s more than enough time for noticeable evolution. Perhaps this is why most high schools and undergraduate programmes are four years long. The sports world is also magnetized to quadrennial events: The Summer and Winter Olympics, the FIFA World Cup (the Rugby World Cup, too, without the human rights abuses), the Commonwealth Games and many other international athletic spectacles run on four-year cycles.

UFC 130 was four years ago today, May 28, 2011, in Las Vegas. The event was not particularly entertaining then, nor does it stand up particularly well now. It was nonetheless a bellwether moment for the Ultimate Fighting Championship. Looking back at UFC 130, now 208 weeks removed, a maligned dud of a card has become a unique prism to look at how mixed martial arts has changed for the better, for the worse, for the weird and in some ways, not at all.

Let me take you back to May 2011 in the MMA universe. Zuffa is still in negotiations with Fox to put the UFC on network television. Just over two months ago, the company purchased its biggest rival, Strikeforce. Zuffa’s previous major acquisition, World Extreme Cagefighting, has been shuttered, its talent absorbed into the UFC, sparking debate over whether fighters like Anthony Pettis, Benson Henderson and Donald Cerrone are “good enough” to hang in the Octagon. Reebok is nowhere in sight, but the promotion is dealing with a sponsor scandal of another kind, as its deal with Full Tilt Poker went up in smoke a month earlier, when two of the company’s owners were charged with fraud, money laundering and violating federal gambling laws. Bjorn Rebney is firmly at the helm of Bellator Fighting Championships (note: not Bellator MMA), having just wrapped the promotion’s fourth season while crowning Christian “Tonton” M’Pumbu as its first light heavyweight champion.

Jon Jones has zero UFC title defenses. Dominick Cruz, not an injury woe in sight, is preparing to defend the UFC bantamweight crown against Urijah Faber at UFC 132. Chris Weidman is 1-0 in the UFC, having decisioned Alessio Sakara. Ronda Rousey is 1-0 as a pro MMA fighter.

UFC 130 was supposed to be headlined by the third meeting between then-lightweight champion Frankie Edgar and Gray Maynard, who had fought to a draw in their classic rematch five months earlier. Unfortunately, Maynard hurt his knee and Edgar broke his ribs. Fans were just starting to cope with the fact that elite MMA fighters actually pulled out of fights now, since the stakes were so high. Fighters were now getting paid in an emerging sport and, so, athletes were less keen to gamble in the Octagon under adverse circumstances. All that is to say, fans were absolutely pissed.

The vexation wasn’t solely because Edgar-Maynard 3 was getting postponed, either. Fans were also promised a bout between Quinton “Rampage” Jackson and Thiago Silva, but the latter failed his post-fight drug test at UFC 125 after submitting a synthetic, non-urine sample, nixing their bout. Instead, Matt Hamill was pulled from a scheduled matchup with Phil Davis at UFC 129 in order to headline the event. All of a sudden, a Memorial Day weekend pay-per-view, initially applauded for its depth, was being widely lambasted.

It was a sign of changing times. Fans kvetched when Jackson headlined UFC 96 against Keith Jardine in March 2009 and thought it a waste of money. However, two years prior, Jackson-Jardine seemed like an aberration, not an omen. During the UFC’s financial boom, the company staged a stable number of cards. In 2006 and 2007, it promoted 18 and 19 shows, respectively, followed by 20 events in both 2008 and 2009. In 2011, the UFC would promote 27 cards, with a staggering 15 of them on pay-per-view, the most in any single year. The increase wasn’t exponential, but it quickly became apparent that the sport’s top promotion was struggling to create major cards with top-to-bottom appeal and relevance. The unfavorable reaction to UFC 130 wasn’t sour grapes over a postponed title fight; it was a realization that, never mind the Strikeforce purchase and these incoming WEC fighters, the UFC was already irrevocably changed.

In the here and now, parts of UFC 130 feel absolutely surreal. The prelims were still on Facebook. It is the first UFC event at which they displayed fighters’ Twitter handles on the chyrons. It seems impossible to imagine that Jackson got a UFC title shot later in the year after sleepwalking through the main event, even if it came as a result of Rashad Evans getting injured. Four years later, the UFC is still thirsting after a disinterested Jackson, while Hamill has retired and unretired, chasing a rematch with the aforementioned Silva in the World Series of Fighting.

Speaking of Evans, as you watch Brian Stann blow out Jorge Santiago’s brains to kick off the main card, which slice of the future seems more likely: Stann becoming the best color commentator in the whole sport while also doing ACC football, or Santiago becoming Evans’ coach at a fledgling team called, sigh, the “Blackzilians?”

As you watch the undefeated Travis Browne clobber Stefan Struve with a Superman punch, how hard is it to reconcile “Hapa” getting taken to the woodshed by Andrei Arlovski four years later? When Frank Mir tools Roy Nelson in a one-sided slopfest, can you even comprehend the fact that these two men, now 36 and 38 years old, are both headlining separate UFC events in the near future?

“You just moved up the ladder here tonight, kid ... from here on, it’s nothing but top contenders,” Joe Rogan told Rick Story after his unanimous decision win over former title challenger Thiago Alves. Since UFC 130, Story is 5-5 in the Octagon. Alves is 3-1 and headlines a UFC Fight Night event against Carlos Condit on Saturday in Goiania, Brazil.

Demetrious Johnson and Renan Barao were scheduled to square off on this card. Johnson opted to step in for an injured Brad Pickett against former WEC bantamweight champion Miguel Torres. The unanimous verdict was a breakout win for Johnson and earned him a UFC title shot against Dominick Cruz later that year. Yet, in spite of Johnson’s future as flyweight ace and a pound-for-pound king, in spite of Torres’ precipitous tumble into mediocrity shortly afterward, I thought Torres won every single round, easily outworking “Mighty Mouse” off of his back; and I wasn’t alone, either.

Yes, four years is a peculiar length of time, but it’s even more bizarre in MMA -- a sport with a modern history tracing back just over two decades. “MMA time” doesn’t seem much like a line or a circle, but rather a chaotic scribble. In the same span in which Johnson transforms from barely beating Torres to being literally one of the greatest fighter ever, Mir and Nelson go a combined 7-9 in the Octagon and both remain headliners. Less than three months later, the UFC and Fox would announce their seven-year partnership. Over that four years, the UFC’s promotional structure has wildly mutated, now running 40 to 50 shows per year, all over the world, from PPV and network television to cable and its own digital platform; and yet, we are still forced to listen to “Face the Pain” by Stemm. The UFC has 25-30 Fight Nights per year, yet “The Ultimate Fighter” not only still exists but is a necessary evil of programmatic television obligation to Fox Sports 1. Twitter may come and go, but fighters and promoters will still find ways to humiliate themselves in 140 characters or less.

Sports and their athletes evolve over time; that’s not a newsflash. The point is not that MMA is changing or even the fact that it changes quickly but how strange it is that the sport can be so radically dynamic and static at the same time. Four years after they were first set to rematch, Edgar is an all-time great, but Maynard is just another guy who fought for a UFC title and failed; Edgar has no title and has lost title fights in two weight classes, yet he is at the peak of his powers as a fighter.

It all seems so weird and contradictory, but four years is long enough to remind me that after 16 years of watching MMA, I have no idea what road the sport is headed down, what turn is next or what it might crash into. I’m not even sure I know the driver, but the ride is oddly comfortable, the seat is familiar and the song on the radio is just getting to the “No escape, can you step to this?!” part. I hate the song, but I sing along anyway.