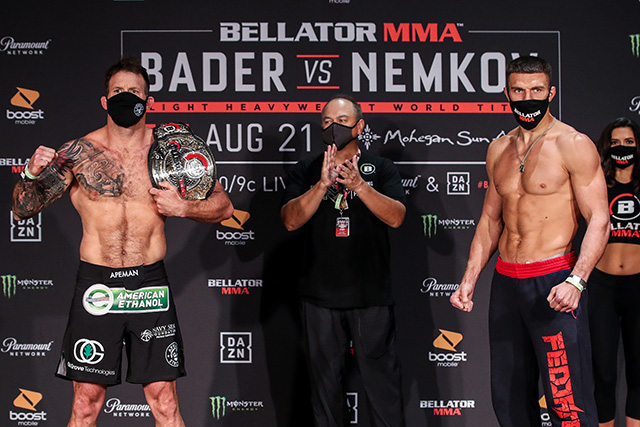 Jon Jones’ decision to vacate the Ultimate Fighting Championship light heavyweight title and make a run at heavyweight, when coupled with Daniel Cormier’s apparent retirement, means that after nine years, someone new will be the face of a glamour division in mixed martial arts.

For the first time since Pride Fighting Championships went under in 2007, there is a reasonable debate to be had that the No. 1 fighter at 205 pounds—or the next one after that, and so on—may not reside in the Octagon. Certainly, anybody who accepts the prevailing view that the UFC is the pinnacle of MMA will anoint the company’s new champion as the top dog. For them, Dominick Reyes or Jan Blachowicz, who meet next month at UFC 253 to crown the promotion’s new light heavyweight champion, should determine the leader of a weight class that seemed written in stone, so long as Jones was eligible to compete or Cormier was there to pick up his slack.

Would-be kings are lining up to get their shot, and if people are fair, they will acknowledge the promotional parity that exists at light heavyweight in 2020 following moves made by several UFC contenders in recent years. Bellator 244 on Friday at the Mohegan Sun Arena in Uncasville, Connecticut, features a 205-pound title fight between champion Ryan Bader and talented Russian Vadim Nemkov, and it represents the first attempt at sorting this out.

“I feel like between me and Ryan Bader … we’ve beaten a lot of top competition in our careers, and this fight should be viewed on a more global level of MMA, not just branded,” said Nemkov, a 28-year-old protege of the great Russian heavyweight Fedor Emelianenko. “The winner should be considered No. 1.”

Bader won 15 times in 20 tries inside the Octagon—a run that started with his rise through Season 8 of “The Ultimate Fighter.” He agreed with his challenger’s assessment.

“Arguably, you can say that the winner of this fight is the best light heavyweight out there right now,” Bader said. “How can you not? We’ve both proven ourselves.

“You look at my resume. Look at who I beat. Look at my wins. You go through that,” he added. “Look at how much I’ve grown [as a fighter]. I haven’t lost, I think, in the last four years. It’s not like I’m fighting bums out here. I’m fighting the best competition out there. I’ve been a perennial Top 5 guy in the UFC before I left, and I’ve grown so much since then. I’m leaps and bounds better than I was five years ago, better than I was a year ago—and ongoing.”

Naysayers can claim he has not faced the best. They can add that the 35-year-old fighter has not competed at 205 pounds since 2017. However, they cannot deny that when the current two-division Bellator MMA champion departed the UFC as a free agent three years ago, he was ranked fifth in the promotion at the time. Nor can they dispute that he has lost once in 13 fights since 2014. Because Bader is joined by Phil Davis and Corey Anderson—each of whom departed the UFC when they were considered top competitors—and others such as Lyoto Machida and Gegard Mousasi, Bellator’s light heavyweight division has improved to the point where a conversation over its relative strength is worth entertaining.

Bellator President Scott Coker relied on acquisitions of established names while identifying talented prospects who also appear capable of maturing into fighters the public should get to know. For perception’s sake, these signings are starting to make a difference.

“I love seeing guys like Corey Anderson come in,” Bader said. “There’s top guys. Phil Davis has been, I believe, a Top 3 or [Top] 4 guy for the last 10 years. A lot of people look and say, 'Oh, UFC and Bellator.’ It doesn't matter what organization you’re in.”

Anderson left the UFC for reasons beyond competition. He said the promotion treated him like “trash,” and despite a Top 5 status in the rankings, “The Ultimate Fighter 19” winner claimed out loud that opportunities were not presented like they should have been.

“Casual fans always think the best fighters are in the UFC,” Anderson said. “There are guys no one has heard about that are better than guys who fight in the UFC. It ain’t about the organization; it’s about promotion, the way an organization pushes a fighter.”

Numbers next to names should mean something, but too often they do not. Anderson was ranked No. 4 in the UFC before leaving the company two weeks ago. These rankings are touted as representing the best in the world. They do not because UFC rankings are confined to that universe. However, if Anderson was good enough to be ranked that high on Aug. 6, why would he be diminished after a career move to Bellator?

“I’m not really worried about it anymore now that I’m in an organization where rankings are not that important,” Anderson said. “You win, do your job and move up. I don’t care about rankings.”

The timing of Jones’ departure, however, opened a window of opportunity that makes ranked light heavyweights particularly valuable right now, particularly for their opponents and the public’s perception of where the best fighters in the world call home. While Anderson isn’t sure he buys Bader as No. 1 if the American beats Nemkov—he points to UFC losses to Anthony Johnson and Glover Teixeira that have not been avenged—it’s worth debating. Consider this a step forward from the baked-in notion that fighters outside the Octagon don’t matter.

“I would love, love, love a co-promoted card, but I don’t think that would ever happen,” said Davis, who joined Bellator in 2015 as the seventh-ranked light heavyweight in the UFC. “You fight and let the fans decide. The fans will tell you who is No. 1. Our division is looking for someone else to stand up on top of it, and I think I’m here for that job.”

There is enough information to know that Bader, Davis and Anderson can compete head-to-head against top UFC light heavyweights for that No. 1 ranking. Anderson is 1-1 against Blachowicz. He heads to Bellator after a knockout loss in February to the Polish light heavyweight, a setback that derailed a four-fight winning streak that included victories over Teixeira and Johnny Walker.

Anderson believes if Blachowicz defeats Reyes, then there is no legitimacy to viewing the UFC titleholder as No. 1 in the world. If Reyes wins? Well, that argument is harder to make since many observers felt the Californian deserved a decision over Jones in 2019.

Occasional departures from the UFC ranks have not prevented the promotion from doing what it has always done, which is why Walker, Teixeira, Magomed Ankalaev, Ryan Spann, Aleksandar Rakic, Jiri Prochazka, Anthony Smith, Thiago Santos and others comprise a group that will battle it out to supplant Jones and capture the UFC’s light heavyweight throne.

Whatever side of the aisle you fall on, resolute claims about Bader or Nemkov being out of their depth against Reyes or Blachowicz ring hollow. “One hundred percent the winner of that fight beats the winner of that UFC title fight,” Davis said. Welcome to the post-Jones era at 205 pounds, where anything seems possible.
« Previous 5 Defining Moments: Ryan Bader Next Bellator 244 Highlight Video: Lucas Brennan Busts Up Will Smith »