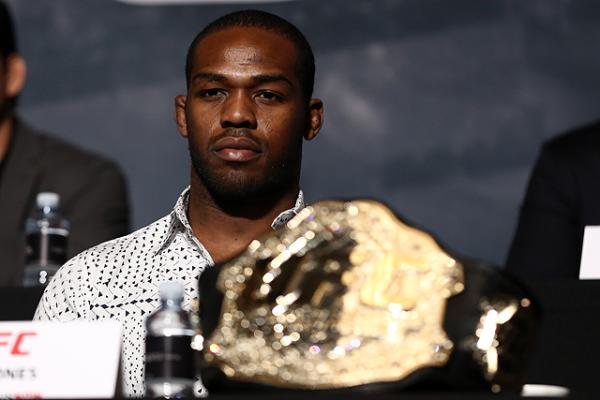 Does Jon Jones deserve a title shot when he returns? Please tell us below. | Photo: Dave Mandel/Sherdog.com

Ever since Daniel Cormier fought his heart out in an intense battle with Alexander Gustafsson at UFC 192 on Oct. 3, the conversation has shifted to the return of Jon Jones; and ever since Cormier claimed the title that was stripped from “Bones” at UFC 187, Jones’ shadow has loomed large over “DC” as the MMA world awaits the lifting of his suspension. Then and only then will we know the true identity of the light heavyweight king.

Here’s the problem: Jones does not deserve an immediate title shot upon his return. Even though he never officially lost the 205-pound championship in competition, he squandered it through indiscretions outside the Octagon and was punished. In my opinion, the punishment will not be complete if Jones gets to come back after one year and jump right into the title picture.

It is no secret that Jones will regain his spot atop the fictional pound-for-pound list whenever he comes back. However, because he was stripped of the title, he should not be allowed to just waltz back into the cage to reclaim it. If he does, he won’t necessarily feel like he had to win back anything. He’ll just be back in the Octagon engaging in a rematch with a guy he already beat for a title he never lost. Mentally, that will not feel like punishment. In Jones’ mind, it might be a mere formality. Considering the fact that the champion does not come to the Octagon with the title, he won’t have that visual feeling like he lost it; and even though Bruce Buffer will recognize Cormier as the “reigning, defending, undisputed UFC light heavyweight champion,” nothing there will really suggest that Jones is fighting to regain the title rather than just facing “DC” again.

Cormier should get a well-deserved break from fighting. On the “Anik and Florian” podcast, he reminded everyone that he has faced the toughest competition possible -- Jones, Gustafsson and Anthony Johnson -- at 205 pounds in less than a calendar year and has fought seven times in two years, all in his mid-30s. You’d be hard pressed to find many other fighters who undertook such a schedule, aside from Robbie Lawler during his recent tear at 170 pounds and the young Jones who steamrolled through the light heavyweight division a few years ago. To ask Cormier to jump right back in the cage because Jones is ready to fight is unfair. Instead, if and when Jones does get reinstated, he should be booked opposite one of two fighters in a title eliminator: Johnson or Gustafsson.

With Cormier taking some time off to heal, Jones should be required to face either the fighter that pushed him to the limit (Gustafsson) or the man against whom he was supposed to defend his title prior to being suspended (Johnson). Neither option seems farfetched.

“Bones” could find redemption against Gustafsson. Even though the Swede is 1-3 over his last four fights, he could easily have gone 3-1 had a few things broken his way. However, it was his eyebrow-raising performance against Jones at UFC 165 two years ago that really put him on the map. Who doesn’t want to see another five rounds of violence between those two? Stylistically and physically, Gustafsson proved to be a nightmare matchup for Jones and required him to dig deep to pull out a victory. Why shouldn’t he have to do it again? After all, he was scheduled to rematch Gustafsson for the title in September 2014 before the Swede suffered a knee injury that forced him to withdraw. Moreover, beating Jones looks like the only legitimate way for Gustafsson to get another shot at Cormier.

On the other side is Johnson, who was slated to meet Jones at UFC 187 before the champion was suspended and relieved of his title. Johnson wound up getting choked out by Cormier, but no one could argue with his being put in Jones’ path now. He torched Gustafsson in one round at UFC on Fox 14 in January, and his size and power are formidable challenges for anyone in the division, including Jones.

Did I mention that Johnson and Gustafsson are ranked No. 1 and No. 2 in the current UFC light heavyweight rankings? Cormier has beaten them both and under the plan I’ve outlined would likely be staring at a showdown with the much-improved and third-ranked Ryan Bader once he returns from a well-deserved vacation.

If you want to properly set the stage for a Cormier-Jones rematch at UFC 200, force “Bones” to get past one of the top two contenders. Don’t just gift him a title shot after all the issues he ran into outside the cage. He is never going to learn lessons that way. Make him earn it.

Andreas Hale is a content producer for Jay Z’s LifeandTimes.com and editor-in-chief of PremierWuzHere.com, as well as a frequent Sherdog.com columnist. Check out his archive here.